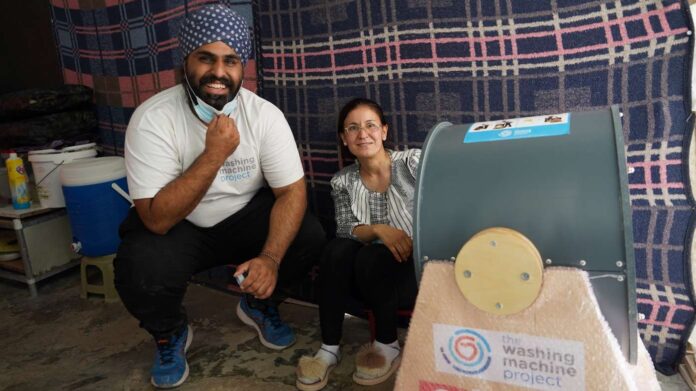 The inventor of a hand-cranked washing machine has traveled to Iraq to distribute the low-cost device to refugees. Navjot Sawhney created the ‘Divya’ to allow those living in poverty to be able to wash their clothes more easily. It is thought around 70 percent of the world’s population does not have access to electric washing machines. The machines are created in the UK and sent to those without access to electricity and water, who would otherwise need to wash clothes by hand.

Mature Trees Will Increase CO2 Absorption By A Third In Response To Raised Levels On Earth, Study Shows

Mature oak trees will increase their rate of photosynthesis by up to a third in response to the raised CO2 levels expected to be the world average by about 2050, new research shows. The results are the first to emerge from a giant outdoor experiment, led by the University of Birmingham in which an old oak forest is bathed in elevated levels of CO2. This latest study adds to the field that looks at the use of forests as effective carbon sinks, and potentially gives climate researchers a new tool in the fight against climate change.

There was a time when Patrice Banks avoided taking her car in for routine maintenance. “I was afraid I was going to be taken advantage of,” she told NPR. “I was tired of feeling helpless and having to go talk to a guy.” Like many women, Banks — who was a materials engineer at DuPont at the time — felt she’d feel more at ease with a female technician. However, this was easier said than done. “I couldn’t find a female mechanic,” she explained, “so I had to learn it [myself].”

Among what must have been hundreds of thousands of stories of sacrifice, heroism, and courage that played out among the Jewish communities across Europe during World War Two, the story of ‘Mr. Radio Philips’, aka ‘The Angel of Curaçao’, has never been well told. But 45 years after his death, Jan Zwartendijk, an ordinary Dutch company man-turned-real hero, is now the subject of a new biography.

Of all plastic produced, only 9% ever gets recycled, according to National Geographic, and 8 million metric tons make their way into oceans every year, much of which is single-use plastic. Cutting down on single-use plastics in your life might mean bringing your own reusable straw on a coffee run, swapping plastic bags for reusable totes, or ditching disposable water bottles; but, it’s time to take it a step further and address the waste we accumulate through our grocery choices.