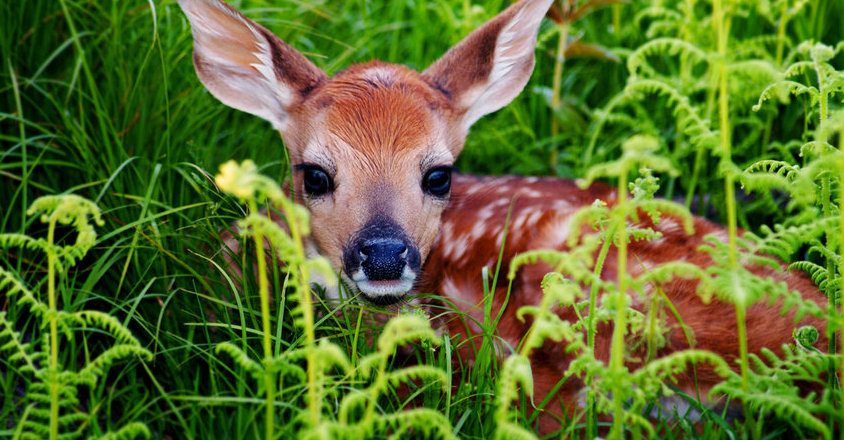 Another spring is here, and along with new flowers, rain and budding trees, wild animals across the state are bringing young ones into the world.

As human development bumps up against wildlife habitats, you may run across a chick or a fawn nesting in a forest or field this season. The state Division of Fisheries and Wildlife recently released an advisory about what to do — and not do — in case that happens to you.

The bottom line: in most cases, you should leave the young animal alone.

Unlike humans, young mammals often get left alone for long periods, according to wildlife officials.

“It may be very tempting to help these animals, but most of the time it isn’t necessary. The adults are often nearby for protection, and visit their young from time to time,” the state’s advisory said.

Rabbit moms will typically leave a nest of bunnies alone for long periods to avoid attracting predators. In the case of fawns, they typically nest in an area where their fur blends in with their surroundings — a natural form of camouflage.

It’s a lot more common to find baby birds outside a nest. If this happens to you, it’s OK to put the baby bird back in the nest if you can reach it, according to wildlife officials. But that’s not the case with slightly older fledgling birds.

“If you find a hatchling or nestling (young birds without feathers) outside the nest, you can try to safely return it to its nest. The parents will not reject it if you touch it. If you find a fledgling (a young, fully feathered bird) outside the nest, leave it be. While it is spending some time hopping around on the ground learning how to fly, its parents are likely nearby still taking care of it,” the advisory said.

The exception to the rule not to disturb wild baby animals is if you see a visible injury, or if you witness an incident like a car collision, according to the state.

But it’s still best to seek professional help. MassWildlife has a map of all types of wildlife rehabilitation specialists across Massachusetts who can respond to emergencies — whether it’s a newt, bear cub or falcon. Find the map here.

Printed courtesy of The Patch.