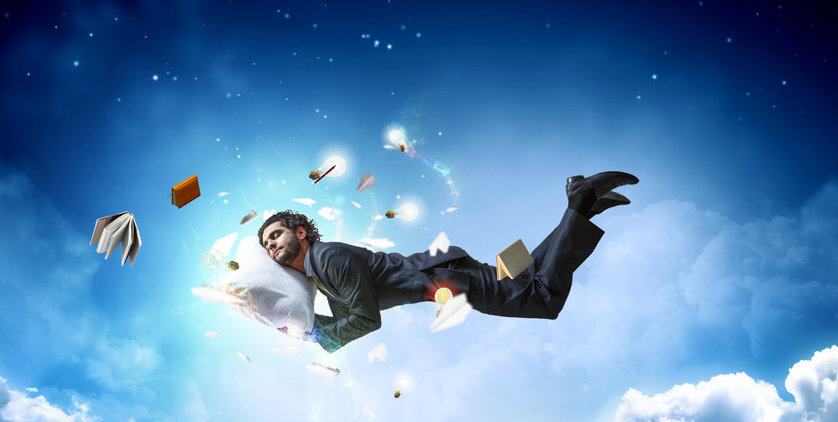 Whether you remember it or not, you dream every night. Sometimes they’re happy, other times sad, often bizarre, and if you’re lucky, you’ll get a sexy dream once in a while.

They’re a normal part of sleep — something we spend one-third of our life doing. While experts are still divided on what our dreams mean, research has given us some very eye-opening information about dreams.

Here are 45 surprising facts about dreams, ranging from interesting to the stuff of nightmares.

1. REM is the sweet spot

Our most vivid dreams happen during rapid eye movement (REM) sleep, which happens in short episodes throughout the night about 90 to 120 minutes apart.

You’re more likely to remember your dreams on weekends or days when you sleep in, because each episode of REM sleep is longer than the last.

4. Your muscles are paralyzed

Most of your muscles become paralyzed during REM sleep to prevent you from acting out your dreams.

5. Pictures are most common

We dream mostly in pictures, with the majority of dreams being mainly visual with little sound or movement.

Recurring dreams in children are mostly about:

7. We don’t all dream in color

Around 12 percent of people dream in black and white.

Many of our dreams are strange because the part of the brain responsible for making sense of things shuts down during dreaming.

9. Our day informs our dreams

Most of our dreams are linked to thoughts or events from the previous day or two.

You likely only dream about faces you’ve already seen in person or on TV, according to Stanford University.

You’re more likely to have pleasant dreams if you’re experiencing low stress and feel satisfied in your real life.

12. Not everything is what it seems

Morning wood has nothing to do with sexy dreams or stimulation. Nocturnal penile tumescence causes men to have three to five erections every night, some lasting 30 minutes.

13. Women can have wet dreams

Men aren’t the only ones who have wet dreams. Women can release vaginal secretions from arousal and even orgasm when having a sexual dream.

Approximately 4 percent of men and women’s dreams are about sex, according to research.

15. Sex dreams are usually about one thing

Most sex-related dreams are about intercourse.

You’re more likely to dream about sex if you sleep facedown.

17. This might also make you dream about other things

Women are twice as likely to have sex dreams about public figures compared to men.

Nightmares And Other Scary Stuff

Nightmares usually begin between the ages of 3 and 6, and decrease after the age of 10.

Women have more nightmares than men during their teen and adult years.

23. Nightmares occur at a similar time at night

Nightmares occur most frequently in the last third of the night.

24. You could have a condition

If you have recurring nightmares that happen often enough and are distressing enough to impact your ability to function, you may have a condition called nightmare disorder.

25. Sleep paralysis is a thing

Around 8 percent of the general population experience sleep paralysis, which is the inability to move when you’re in a state between sleep and wake.

26. Your feelings come out in dreams

For example, you’re more likely to experience negative dreams about a lost loved one if you’re suffering from post-traumatic symptoms, guilt, or blame over their death.

27. The holidays can be rough

Grief dreams, which are dreams about deceased loved ones, are more common during the holidays.

28. Night terrors can be frightening

Night terrors are episodes of intense fear, screaming, and even running around or acting aggressive while asleep.

29. Children have them more frequently

Almost 40 percent of children have night terrors, though most outgrow them by their teens.

30. Adults can still have them

Around 3 percent of adults have night terrors.

Eating before bed makes nightmares more likely, because it increases your metabolism, signaling your brain to be more active.

Certain medications, such as antidepressants and narcotics, increase the frequency of nightmares.

Confusion, disgust, sadness, and guilt are more often the driving force behind nightmares than fear, according to research.

Everyone dreams, including pets.

People forget 95 to 99 percent of their dreams.

People over the age of 10 have at least four to six dreams every night.

Some believe dreams can predict the future, though there isn’t enough evidence to prove it.

39. We dwell on the negative

Negative dreams are more common than positive ones.

40. You may be able to control your dreams

You may be able to learn to control your dreams by using techniques for lucid dreaming.

Swearing is a common occurrence in sleep talking, according to a 2017 study.

Hypnic jerks are strong, sudden jolts, or the feeling of falling that occurs just as you’re falling asleep.

43. This may cause falling sensations

Hypnic jerks may be the cause of dreams about falling, which is one of the most common dream themes.

44. Tooth dreams could have a bigger meaning

Dreams about your teeth falling out may be caused by undiagnosed dental irritation, like bruxism, rather than a premonition of death like old folklore suggests.

45. By far the most mind-boggling fact of all

Though they’ve been trying to figure it out since the beginning of time, researchers don’t know why we dream or what purpose it serves, if any.

The Psychology Of Dreams

Everyone, at one time or another, has wondered what their dreams mean.

Dreaming is the most extensively studied cognitive state. While some experts believe that dreams have no meaning and serve no function, others believe that our dreams do mean something.

A number of theories exist on what dreams mean, some of the more recognized theories include:

These barely begin to scratch the surface of dream interpretation theories. Here are some other interesting theories on the meaning of dreams:

Experts may not have any concrete answers as to why we dream and what function dreams serve.

What we do know is that everyone dreams, and even our really strange dreams are perfectly normal.

Adrienne Santos-Longhurst is a freelance writer and author who has written extensively on all things health and lifestyle for more than a decade.

See also:
Taking Your Dreamwork To The Next Level
Discovering What My Dreams Want Me To Know Through Archetypal Dreamwork