A Herd Of Goats: The New Moon In Capricorn

My Capricorn grandmother gave me this little brass goat, symbol for the constellation Capricorn. He nuzzles my pottery in a sunny corner of my house. I had always planned to give him away, yet he remains with me. I don't know where his original was made. Maybe he is from one of the places and people we call Babylon: Iraq, Persia, Iran, places where Western Astrology was born. And, even though, I don't have any Capricorn planets in my birth chart, this new Moon will offer me, and all of us, the energy of his powerful place in the ecliptic. There is a crowd of planets, like a herd of impatient goats meeting in this location.

As well as the Sun and Moon, we have Saturn, King of Capricorn, Black Moon Lilith, Mercury, Pluto, and Venus all in the sign of the goat! Seven heavenly bodies teaching us the rules of Capricorn, who suggests that we do things responsibly, and that we do them well, step by step.

It was a lesson my Capricorn grandparents tried to teach me, but I wasn't very interested. Those steep stairs looked grim and could only lead to something not relevant to me, or to my generation. I wanted to leap forward, unprepared, but full of inspiration. I could see what I wanted, why climb a lot of stairs to get there?

The Sabian Symbol for the degree of the new Moon refers to the rules of Capricorn: Pilgrims climbing the steep steps leading to a mountain shrine. 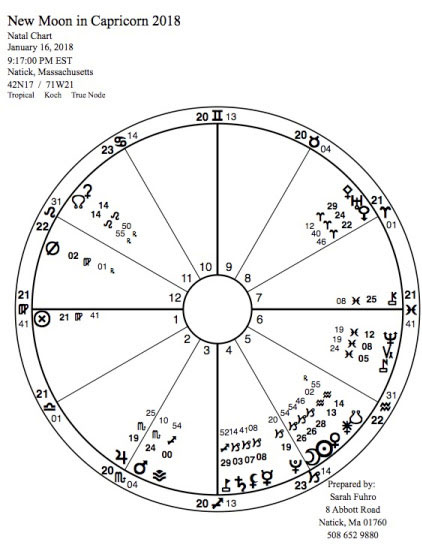 This tells us about the inevitability of the stairs. Saturn is the inevitable. He is the teacher at the beginning of this parade of Capricorns, which ends with Venus, the reward for the journey. The goat loves to climb to the highest point in the environment. The courage and patience it takes to keep climbing is not always acknowledged, but the rewards are very high.

Capricorn has everything to do with organizations; business, government, family, community. At the moment we are watching the destruction of those slow moving but secure institutions. Bureaucracy, something we all find ridiculous, out dated or stupid doesn't look so bad when think about the Environmental Protection Agency or the National Park Service or even the State Department decimated by those who would 'drain the swamp.' And what's wrong with swamps? They are the source of new life and the last refuge of wildlife in a ravenous world. I think this stellium in Capricorn may have some consequences for those who want to sweep away protection for air and water, the climate and those who live in desperation. Capricorn is about the material world, but it is also a warning to understand the spiritual consequences of the material world, which demands karmic balance, and is eternally in flux. 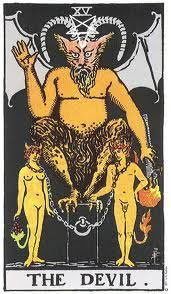 The Devil is the card which corresponds to Capricorn in the Tarot deck. The message of this card and this new Moon is the huge source of energy available to us from whatever we fear most. The woman and man chained to The Devil's throne could easily escape their chains, but they are imprisoned by old beliefs which keep them enslaved. Fear of nature, and of their power to manifest their soul's potential is represented by The Devil, an angel once called Lucifer, 'the light bringer.' At any time they could turn around and see what is available to them in freedom.

There are other players in this chart of the new Moon, which will be felt in powerful ways. Square to the Sun and Moon and Venus are Uranus, Eris and Pallas Athena in Aries. This is like adding some cayenne pepper to a very heavy stew. The demands of the Capricorn stellium are not going to be patient with this extra fire added. And to continue the theme, we have Mars, ruler of Aries, also present to add a little Scorpionic juice. If you made some kind of projected map for the year ahead, begin the journey with this new Moon. You will have a lot of cosmic help to guide you to new territory. 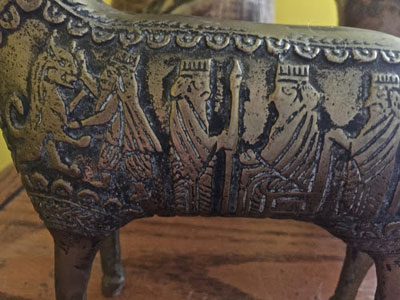 On both sides of my Capricorn goat there is a bas relief which seems to tell the tale of a royal court, or perhaps illustrates seven stages of a regal story. There are seven figures, just as there seven cosmic elements to the Capricorn theme of this new Moon. While most are passive, the first, or is it last, shows a crowned figure who wrestles with a lion. The nationwide eclipse of 21 August 2017 was in Leo close to the degree of this Moon/Sun and Venus combination. The Lion must never be conquered, but only channeled for he is the symbol of mastery, of the king's close relationship to the Sun (Leo). What if this combination of earthy Capricorn to manifest, the dynamic influence of Uranus and Mars and the prophetic power of the Leo eclipse were to be directed to development of solar energy!? And what is the equivalent to switching to renewable energy in your life?

The Wisdom Tradition evolved over the centuries to address our deepest human needs. Sarah Fuhro is a practitioner of its many forms; including Astrology, Tarot, Flower Essences and Druidry. In addition to personal consultations, Sarah teaches workshops and private classes, offering both clients and students knowledge powerfully rooted in the past, presented in the language of the present. To learn more, please visit www.sarahfuhro.com.

See also:
Today’s Daily Astrology
The Wheel of the Year: A Path of Spiritual Awakening