While most surveys suggest that the public generally supports wind and solar power, opposition from local communities and residents sometimes blocks or delays specific new projects.

Consider the ill-fated Cape Wind offshore project, which was slated to be powering Cape Cod by now. Although Massachusetts has some of the nation’s strongest renewable energy policies, a group of coastal homeowners in that state objected vociferously soon after Cape Wind Associates, the developer, first proposed building it in 2001. They ultimately filed more than a dozen lawsuits over 14 years, creating hassles and delays that along with opposition from other parties doomed it.

As renewable energy researchers witnessing similar storylines play out across the country, we wanted to see how much local opposition there is to existing wind farms. With funding from the Energy Department and help from our colleagues, we teamed up to undertake the largest scientific study to date on how people who live near U.S. wind farms perceive them. 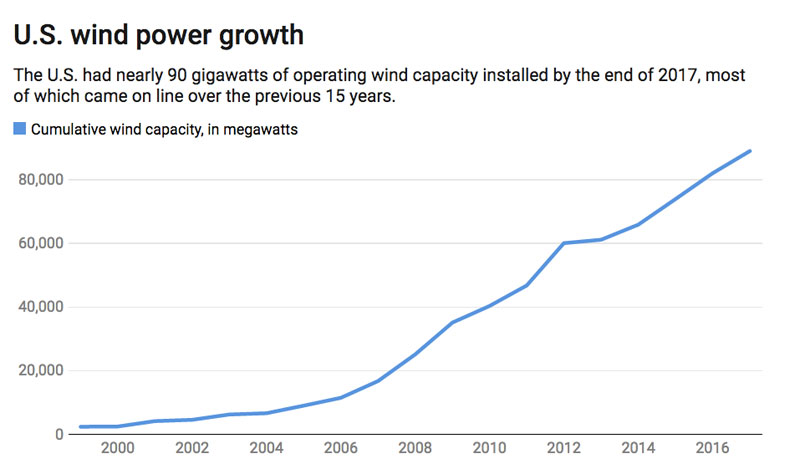 As of the end of 2017, about 50,000 utility-scale wind turbines were supplying nearly 7 percent of the electricity in the U.S. With experts foreseeing another 3,000 turbines per year on average coming online in the years ahead, more and more people will be living near wind farms.

Clearly, community support or opposition could either speed up or slow down the growth of this renewable energy source.

And there’s no doubt that fighting about wind power makes for interesting journalism. It’s a story that highlights the conflicts that can arise among local residents and efforts to reap global benefits. While renewable energy is supposed to save the world, questions have arisen regarding its potential impacts on wildlife, public health – in the form of ailments allegedly caused by wind farms – and perceived fears of eroded property values and tourism revenue.

In general, we have observed that the media coverage of attitudes toward wind energy tends to be very anecdotal. Vivid stories of suffering dominate the discussion, which is often devoid of fundamental or methodical analysis of public opinion, the severity of the associated annoyances or even the extent of discontent among people living next to or near wind farms.

Our research is meant to help fill that gap. In this Lawrence Berkeley National Lab-led project, we asked 1,700 people living near 250 wind farms across 34 states to tell us how they really felt about being so close to those turbines.

We found that as of 2015, more than 1.3 million homes are within five miles of a utility-scale wind turbine, a number that is increasing. And despite what you may have read in the media, our survey showed that most people living within five miles, and even within a half-mile, of wind farms don’t mind the turbines.

We also looked into the most common reactions to wind turbine sounds, shadow flicker, lighting and landscape changes, as well as the perceived fairness of the public planning and siting process.

As it happens, we found that only 16 percent of all residents within five miles of wind farms had ever heard the turbines make any noise. Of those, 27 percent found the noise moderately or very annoying. Further, we learned that roughly two-thirds of those who were aware of their local planning process for the wind project perceived it as having been largely “fair.”

In general, the positive attitudes the survey’s respondents expressed about wind projects followed a few patterns. People hosting turbines on their property, as well as those being compensated for the power they generate were more apt to say the planning process was fair and to view wind power in a positive light.

People who harbored negative attitudes about wind power were more likely to be annoyed by sounds the turbines make, to say that wind turbines clashed with the surrounding landscape and to say that they found the project’s planning process to have been unfair. 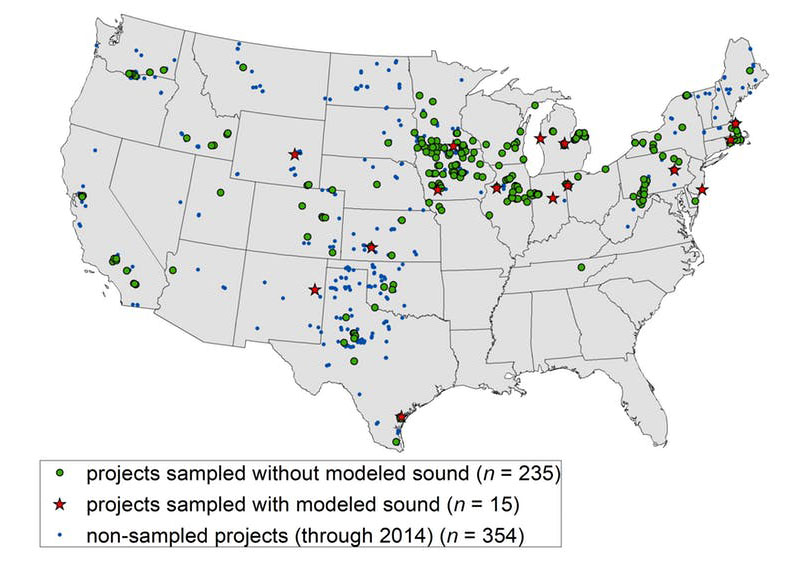 There is no magical way to resolve siting conflicts that sometimes arise over wind farms.

While turbines may be getting quieter due to technology improvements, they are also getting bigger. Taller towers and longer blades are driving down the cost of energy production and allowing production in areas previously considered uneconomical due to low average wind speeds, such as Delaware, North Carolina and West Virginia.

Since bigger turbines are harder to miss and can be seen from farther away, this change may create more conflict in the future.

But no matter what, wind project developers clearly must actively engage, coordinate and cooperate with local communities and community members. Inclusive and transparent planning processes can dissipate local residents’ fears. Local ownership and financial benefits may help sway nearby residents who would otherwise object to a new wind farm.

Taking these steps could help prevent future debacles like Cape Wind in the future, as, finally, offshore wind is poised to take off in the U.S. While there is no silver bullet to ensure a wind farm’s successful completion, developers, planners and other stakeholders should heed the lessons from the large body of rigorous analysis rather than unrepresentative anecdotes about public distaste for wind turbines that often garner media coverage.

Jeremy Firestone is a professor and director of the Center for Carbon-free Power Integration (CCPI) at the University of Delaware. His research and writing focuses primarily on offshore wind power, with emphasis on public perceptions, economic preferences, spatial planning, regulation and governance.

Ben Hoen is a research scientist at Lawrence Berkeley National Laboratory where I lead multiple projects that focus on the intersection of renewable energy and the public.