Earth Talk: Is It True That Koalas Are On The Verge Of Extinction? 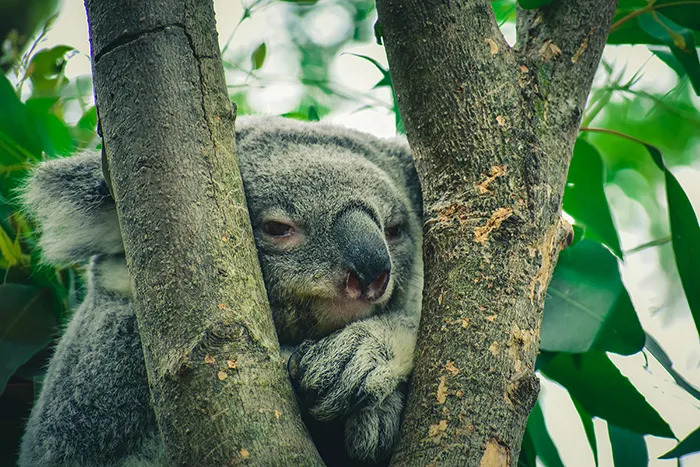 Koalas are on the ropes across Australia thanks to last year’s Black Summer and ongoing threats to their habitat. Credit: Chris F, Pexels.com

Dear EarthTalk: is it true that koalas are on the verge of extinction? What is being done to help this species survive? – May Jenkins, Chicago, IL

Despite their status as icons of biodiversity, koalas have been in steady decline for two decades. Yet the conservation status of this Australian native has only just changed from “threatened” to “endangered” in recent months following a series of bushfires that raged across Down Under during the summer of 2019 (later termed “Black Summer”).

Prior to Black Summer, disease and climate change were the primary determinants of the size of koala populations. Habitat loss has also contributed to the koala’s plight in recent years, including deforestation, urbanization and ecological fragmentation. Indirect factors range from animal grazing to agricultural and mining practices. However, Black Summer presented the ultimate tipping point for koalas.

According to Anne Kerle of the New South Wales (NSW) Threatened Species Scientific Committee, koala populations have declined some 50 percent across Australia due to Black Summer. To combat this, state governments such as NSW announced a commitment of AUS$193.3 million, representing the largest financial promise by a government, to conserve koalas. The majority of funding will go toward habitat conservation and research on koalas, with the remainder dedicated to garnering community support and establishing a koala safety program.

In addition, the Queensland state government has promised more than AUS$24 million will go beyond saving the koalas to inspire remediation efforts for other threatened species. Environment Minister Meaghan Scanlon states that Queensland promotes “one of the most biodiverse places on the planet,” emphasizing the critical need to protect threatened species (especially in an area that also upholds the highest number of threatened species due to anthropogenic—i.e. human-caused—habitat loss). According to the Wilderness Society, 90,000 hectares of land was cleared for beef production alone in the span of a single year. This initiative indicates a commitment funding, researching, and creating environmental laws that restrict habitat clearing, according to Queensland Conservation Council Director Dave Copeman.

A large part of koala recovery efforts will be community-based. Along with encouraging activism that holds Australian decision-makers accountable for their actions that destroy koala habitats, education of young people will promote awareness of the need to save koalas, especially because they tend to be inconspicuous in their habitats and thus “out of sight and out of mind.”

Just like any threatened species, koalas are worth saving, not just because they are beloved but also for the sake of protecting the biodiversity of Australia’s flora and fauna.