Fungal Diseases Are On The Rise. Is Environmental Change To Blame?

Fungi are everywhere — from the mushrooms that decompose fallen logs in the forest, to the mold that grows in your bathtub, to the microscopic fungal cells that reside naturally on your skin. Scientists estimate there are 1.5 million species of fungi on the planet. They’re a diverse group, bunched together by their ability to use digestive enzymes to break down and absorb nutrients from their surroundings — a characteristic that makes some of them great decomposers. Fungi are, in essence, nature’s first compost bin. Many of them also help plants grow or carry out other important ecosystem functions.

And some fungi are pathogens, causing disease in plants and animals, including humans. Throughout human history, fungal diseases have been pretty rare. Those that do arise tend to be only skin deep (think athlete’s foot or ringworm). Our complex immune systems and our hot bodies — most fungi can’t survive our internal temperatures — have largely protected us from major life-threatening fungal outbreaks.

“We live in a sea of fungi, but probably less than 20 to 30 species are common pathogens in humans,” says John Perfect, an infectious disease specialist at Duke University.

Invasive fungal infections — the really bad kind that infect the heart, blood, brain, bones and other internal organs — kill about 1.5 million people worldwide every year. According to some estimates, at least as many people die from the top 10 invasive fungal diseases as from tuberculosis or malaria. Perfect and other experts say these deadly diseases are on the rise. Some fungal pathogens that infect humans are emerging in parts of the world where they’ve never been found. In hospital patients, these life-threatening fungal infections are becoming more difficult to treat. Scientists and doctors are beginning to trace these worrying trends to human activity and changes in the environment, and working to figure out what we can do differently to reduce the threat.

The rise of human fungal infections coincided largely with the onset of the AIDS pandemic of the 1980s, says Robin May, a microbiologist at the University of Birmingham in the UK. Fungal diseases flourished in the severely immune-compromised population of people with AIDS. One fungal disease in particular — cryptococcosis — became an AIDs-defining illness in the 1980s. While the advent of antiretroviral therapy substantially reduced the number of people getting — and dying — from cryptococcosis, the disease remains a big problem in some parts of the world.

The main cause of the disease is a common fungus found in soils all over the world called Cryptococcus neoformans. In some people with cryptococcosis, the fungus invades the lungs, causing pneumonia and other breathing problems. In some cases it spreads to the nervous system and causes swelling around the brain. More than 1 million people with HIV/AIDS worldwide are affected with cryptococcal meningitis each year. The infection often is fatal in those with weakened immune systems, though it’s rare in people who are not immunocompromised. 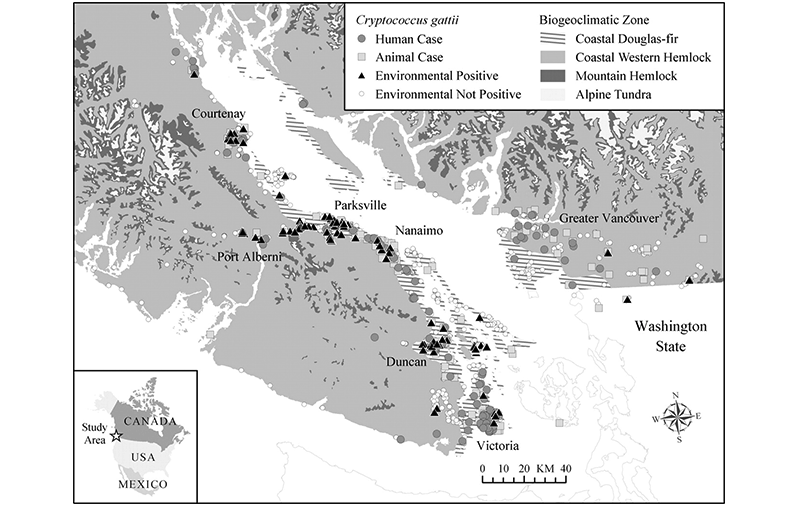 Then in 1999, doctors on Vancouver Island in Canada diagnosed six people with what appeared to be a more virulent strain of cryptoccosis. None of the infected individuals had medical conditions, such as HIV, that would weaken their immune systems. They were otherwise healthy.

Researchers tracked the new infections to a different species of fungus — Cryptococcus gattii — a fungus that is more commonly found in the tropics. How the fungus made its way to Canada’s west coast is anybody’s guess. But it colonized its new, northern environment causing infections over the next decade in healthy individuals across the Pacific Northwest before starting to wane.

The emergence of C. gattii in the Pacific Northwest raised the notion that changes in climate could potentially increase the range of some fungal pathogens, according to May, who studies why some fungi are more harmful to humans than others. Researchers are now trying to understand how long-term changes in weather patterns — temperature or moisture, for instance — might impact human exposures to C. gattii and other fungal pathogens in the environment. 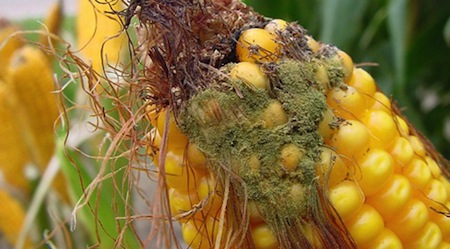 Very few fungi can survive extreme heat or freezing temperatures. Instead, most thrive in moist, temperate climates. As the world warms, that temperate range is increasing, says May. And the fungi are keeping pace.

Some of the clearest reports come from agriculture, where fungi cause more than two-thirds of all crop diseases worldwide. “Major fungal diseases such as rice blast, wheat stem rust and corn smut challenge the global food supply,” says Sarah Gurr, chair in food security at the University of Exeter in the UK.

She and colleagues have shown in the northern hemisphere that fungal pests are shifting poleward at a rate of 7.6 kilometers (4.7 miles) per year. This means new fungal threats for some of the world’s most important grain producers, including the northern prairies of Europe and North America, says Gurr.

Fungal diseases are having their moment in wildlife too. Over the past 30 years, a chytrid fungus has led to the extinction of more than 200 species of frogs, leading to the greatest disease-caused loss of biodiversity in recorded history. Deadly white nose syndrome — named for the white fungal growth that characterizes it — has been spreading through bat populations in the eastern half of North America since 2007.

Fungal species can only cause disease if they can survive at host temperatures, explains Arturo Casadevall, a microbiologist and immunologist at Johns Hopkins Bloomberg School of Public Health in Baltimore, Maryland. Casadevall and others worry that global warming could drive the evolution of more heat-tolerant fungi — a change that could have big implications for human health.

“A major factor protecting us from fungal disease is the difference in temperature between the human body and the outside environment. As fungi adapt to living at higher temperatures, we may begin to lose some of that natural protection,” says Casadevall. For a heat-tolerant fungus, the human body might start to look less like a sweltering furnace and more like a balmy retreat.

Casadevall and colleagues have demonstrated that some fungi may already be adapting to warmer temperatures. When they analyzed thermal susceptibility data for several strains of yeast (a type of fungus) gathered since 1985, they found an increase in the past 20 years in the maximum temperature that some strains could withstand. The findings, say the researchers, are a “clear warning that global warming may cause fungi to become significantly more thermally resistant,” though it’s not possible yet to predict which species may become new human disease threats.

The rise in invasive fungal diseases may be due to a number of non-environmental factors too, including increased susceptibility due to medical procedures.

“Advances in medicine have come with a few trade-offs, one of those being a rise in human fungal infections,” says Jack Edwards, a medical mycologist at Harbor/UCLA Medical Center in California. Edwards studies life-threatening infections due to yeast in hospitalized patients.

The CDC estimates there are roughly 46,000 cases of hospital-associated invasive candidiasis each year, a number that’s increased over the past two decades. It’s one of the most common bloodstream infections in hospitalized patients, and is caused by Candida yeasts that normally live in the gut and on the skin with few problems. But in patients with weakened immune systems — people on cancer chemotherapy or who have undergone an organ transplant, for instance — Candida can be a big problem, causing deaths in about 30 percent of patients with bloodstream infections.

Overuse of antibiotics may be another factor leading to more life-threatening fungal infections. The human gut microbiome — the living things within our intestinal tract — consists of a few trillion organisms, including bacteria, viruses and even fungi. It’s a whole community of microscopic bugs — some of them helpful, some of them harmful. Our health depends on just the right balance.

Most antibiotics don’t discriminate between good and bad bacteria, explains Perfect. “Every time you take an antibiotic, you’re killing off some of the good bacteria in your gut that keep the growth of harmful organisms such as pathogenic yeast in check,” he says.

Invasive fungal infections can be some of the trickiest medical problems to treat. A dearth of antifungal medications is one reason, says Edwards. There just aren’t a lot of drug options for preventing or treating fungal disease.

“We have vaccines for parasites, viruses, bacteria. But no fungal vaccines,” says Edwards. He’s working with collaborators to develop a vaccine against candidiasis that could be given to transplant recipients, intensive care patients and others at high risk to prevent the life-threatening yeast infection.

Some experts fear that rampant use of single-target-site fungicides — chemicals with one very specific means of killing fungi — in agriculture could translate into more drug-resistant fungal infections in humans. 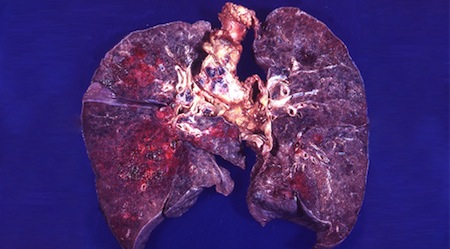 In Europe, the Americas and Asia, researchers have found drug-resistant strains of Aspergillus fumigatus in garden soil, plant seeds, rice fields and compost. The fungus causes a disease called aspergillosis, which can cause breathing problems in both immune-suppressed and healthy people.

The discovery of drug-resistant aspergillosis in patients who have never before taken antifungal medications suggests that drug resistance in some cases could be coming from the environment and not from previous use of antifungals, says Gurr.

She says we should limit use of agricultural fungicides that are structurally similar to medically important antifungal medications. More research is needed too, she says, on the basic life cycle of fungal plant pathogens. Such knowledge, says Gurr, could lead to more judicious use by helping farmers to better plan when in the growth cycle to apply fungicides to their crops.

Perfect says fungal diseases have become a “silent” epidemic among certain groups — cancer patients, people with AIDS and the severely ill in hospitals. And the problem seems to only be exacerbating with time: Over the past year, reports have emerged of yet another — frequently drug resistant — hospital-associated fungal threat, Candida auris, in at least 16 countries around the world. As the environment around us changes and our natural defenses become more tenuous, Perfect warns, we need to take steps to protect ourselves, especially the most vulnerable among us.

UPDATED 04.29.17: Fungal diseases cause more than two-thirds of all crop diseases worldwide.

Lindsey Konkel is a New Jersey–based freelance journalist. She writes about science, health and the environment. Her work has appeared at print and online publications, including Newsweek, National Geographic News and Environmental Health Perspectives. twitter.com/lindseykonkel and lindseykonkel.com

See also:
Family First Aid Kit: Natural Antibiotics
Antibiotic Overuse Might Be Why So Many People Have Allergies