Both Western and traditional medicine agree, cranberries are more than just tart and tasty.

Toss a crimson cranberry in your mouth and an irrepressible response begins. That sweet zip followed by a puckered sour. All your tissues constrict, as if your body is trying to fold in on itself, absorbing the medicinal benefits of cranberry.

Traditional and Western Medicine: Tart, crisp, and instantly cooling—these gems are packed with phytochemicals, antioxidants, antivirals, and antibacterial actions. As if that weren’t enough power packed into this teeny fruiting body, they also assist in treating inflammation with a high Vitamin C and manganese content. These lively little fruits contain a compound called proanthocyanidins, which work to impede the ability of bacteria like E. coli to adhere to the lining of the bladder, making them an effective treatment for urinary tract infections. This combination culminates in the ability to clear heat from inflamed tissues, specifically in the liver, kidneys, and bladder.

12,000 Years of Cultivation: The American cranberry is indigenous to North America, and regional varieties adorn the continent in a belt of distinctive flowering and fruiting bogs that spans from the Pacific Northwest to the Northeast. Native peoples, from the Quinaults to the Wampanoags, have been cultivating and harvesting wild cranberries for more than 12,000 years. Close cousins to other valued Indigenous foods, such as blueberries and huckleberries, they are sought out each fall. Indigenous languages name the berry “bitter berry” or “sour berry.” In the springtime, cranberry bogs produce a blanket of delicate pink flowers that resemble the bill of a crane. When the settlers saw this they started to refer to it as the “craneberry.” Wild cranberries can still be found for foraging in small pockets in coastal areas.

Modern Production: America now cultivates and produces more than 404,880 metric tons of cranberries each year, most of which become sugary beverages or dehydrated versions. Ocean Spray is a cooperative buying from more than 700 cranberry growers. During Thanksgiving week, 20% of the annual harvest is consumed—often in the form of jelly in a can. Yet, cranberries are tasty and most nutritious when eaten fresh. So now’s the time to buy them fresh—you can always freeze them for later use. And when you buy them in their whole form, farmers make the most profit. Here are three recipes that use whole cranberries. 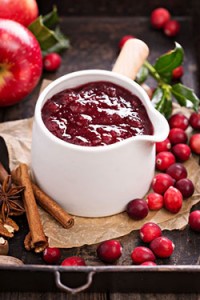 Valerie Segrest (Muckleshoot) is a nutrition educator who specializes in local and traditional foods. She is regional director for Native Food and Knowledge Systems for the Native American Agriculture Fund.