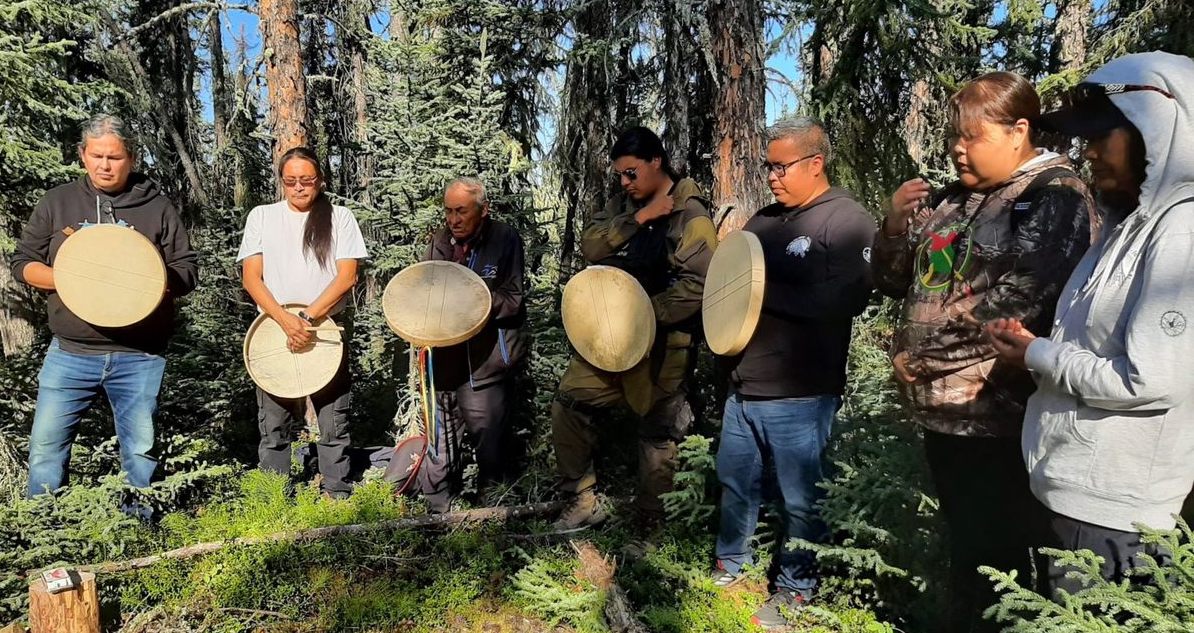 Canada’s First Nations Protect Millions Of Acres Of Their Lands

On yet another unusually warm day last August, members of the Łı́ı́dlı̨ı̨ Kų́ę́ First Nation in the Northwest Territories of Canada held a fire-feeding ceremony, drummed, raised their eagle-emblazoned flag, and prepared a celebratory feast for themselves and a group of scientists 30 miles south of where they live in Fort Simpson. By the close of festivities, Laurier University’s 23-year-old Scotty Creek Research Station had become the first Indigenous-led research station in Canada. The event marked another milestone in a remarkable effort by Indigenous people across Northern Canada to address the impacts of climate change.

The Hidden Underwater Forests That Could Help Tackle The Climate Crisis

by Lucy Sherriff, The Guardian

Bubbles stream furiously behind Frank Hurd as he gently parts the curtains of giant kelp. Green and gold ribbons reach upwards through the cold waters of the Pacific Ocean towards the sun. Hurd, a marine biologist with the Nature Conservancy, is diving in a kelp forest off Anacapa Island, one of the protected rocky volcanic islets that form the Channel Islands national park, an archipelago off the coast of southern California. This thick, healthy kelp – a type of seaweed – forms a small part of underwater forests that blanket the coastline of nearly every continent.

The Year In Cheer

by RTBC staff, Reasons to be Cheerful

Reasons to be Cheerful is celebrating the 183 ways the world got better in 2022. Their annual year-end roundup of the brightest, boldest ways the world improved, evolved or otherwise changed for the better. It’s a randomized bingo-ball tumbler of a list, pulled straight from the pages of RTBC, and we hope it brings you some cheer as we leap into 2023 together.

The Food and Drug Administration said Tuesday that abortion pills can now be offered at retail pharmacies in the United States, a major shift in policy that could dramatically expand Americans’ access to medication abortion. The FDA announced the new rules for abortion pills after a year of negotiations with the two companies that make the pills. Previously, patients could only receive the medication from some mail-order pharmacies or doctors and clinics that went through a certification process. Now, patients will still need to obtain a prescription from a certified health care provider, but any pharmacy that accepts a prescription can fill it.

Justice campaigners celebrated after U.S. President Joe Biden signed a bill empowering federal regulators to ensure that charges for video and audio calls from correctional and detention facilities are “just and reasonable.” Named for a late nurse who fought for lower rates after struggling to afford phone calls with her incarcerated grandson, the Martha Wright-Reed Just and Reasonable Communications Act of 2022 was sent to Biden’s desk last month. The measure, led by U.S. Sens. Tammy Duckworth (D-Ill.) and Rob Portman (R-Ohio), amends the Communications Act of 1934 to require the Federal Communications Commission (FCC) “to ensure just and reasonable charges.”

Citizen Problem-Solvers: Advice To The New Congress On Gridlock

As the national capital, Washington is the place aspiring and veteran navel-gazers converge, endlessly analyzing wrinkles in American politics that average Americans don’t even see. It’s an art and an industry. Ideally, they would value the perspectives of farmers and firefighters, teachers and truck drivers – welcoming their ideas and refining them through all this thinking and talking. But sometimes those ideas instead get mired in bureaucracy, hierarchy, or party politics. And now, amid deepening partisanship, many feel the wheels of Congress have largely ground to a halt.