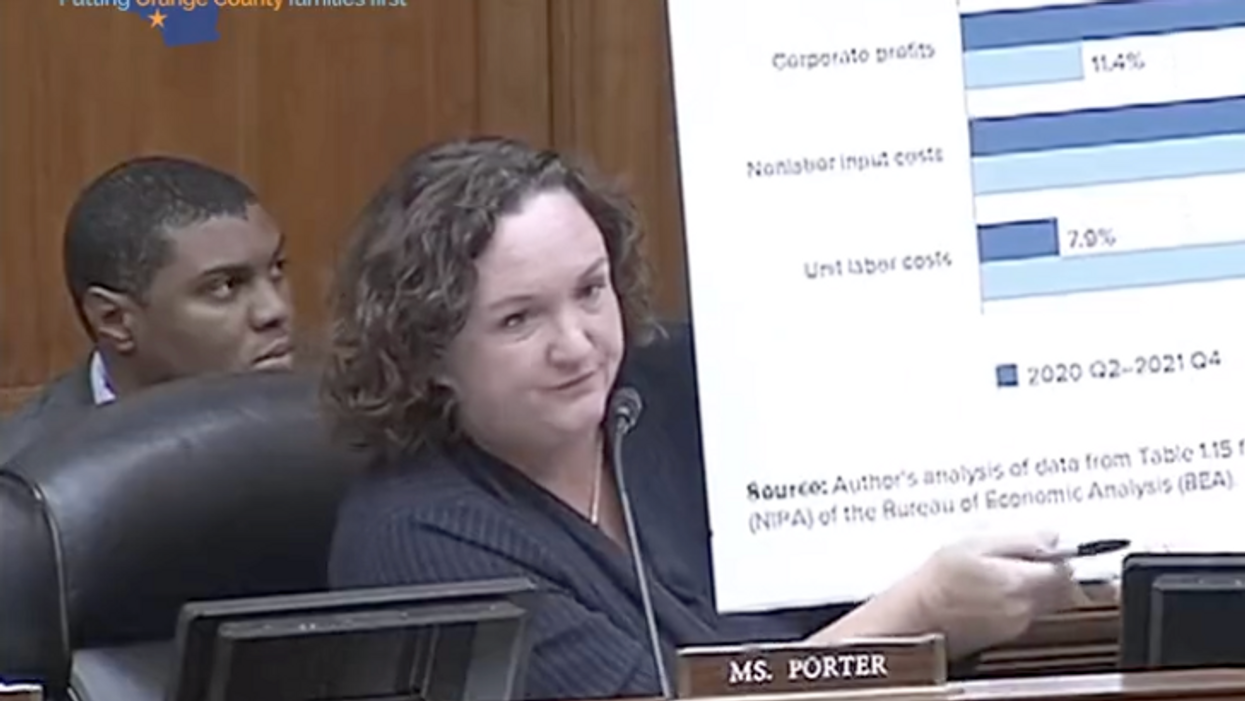 During a House of Representatives hearing on Wednesday, United States Congresswoman Katie Porter (D-California) grilled Mike Konczal, the director of Macroeconomic Analysis at the Roosevelt Institute, over the primary cause of inflation in the post-COVID-19 economy. Equipped with one of her easy-to-read, data-filled posters, Porter got Konczal to admit that surging corporate profits are forcing American consumers to pay significantly more for goods and services. “According to this chart, what is the biggest driver of inflation during the pandemic? The blue – the dark blue is the recent period,” Porter pointed out. “It would be corporate profits,” Konczal confirmed.

by Deviko Rao, The Week

Researchers and scientists have laid out an argument in favor of recognizing the ocean as a living being with rights in a report in the journal PLOS Biology. Doing so would recognize the various benefits that humans reap from the ocean, scientists say, including being responsible for 50-80 percent of the Earth’s oxygen production, regulating the climate, and providing opportunities for transportation and recreation. The report falls into the study of “Earth law,” which is a legal sector aimed at having laws and institutions recognize the interdependence between humans and their environment, Science Alert reports. One of the principles of Earth law is recognizing the intrinsic value of nature on its own.

‘Everyone Seemed At Ease’: How Art Is Making Hospital Visits Less Painful

by Mina Holland, The Guardian

It was a hot, rainy weekday and we had come to Snow Fox, a ward for regular paediatric outpatients at the Evelina London Children’s Hospital, with our three-month-old daughter. Though she was, as yet, undiagnosed, we were beginning to realise there was something gravely wrong. She’d been admitted to our local hospital three weeks earlier. There, the ward’s bare walls bore peeling paint and our bed overlooked the hospital’s bins. The bleakness of our circumstances was mirrored by the environment. But not on Snow Fox. Experiencing its warm lighting, bright colours and upbeat design, I was instantly struck by a calm I hadn’t felt since before my daughter was born, and a confidence that this was the place we needed to be.

by Brendan Morrow, The Week

A new U.S. coin will make history by honoring a trailblazing movie star. U.S. Mint has announced it will start shipping quarters featuring an image of actress Anna May Wong, making her the first Asian American ever featured on U.S. currency. Wong starred in more than 60 films and became the first Chinese American movie star in Hollywood. This coin will be part of the American Women Quarters Program celebrating distinguished women. Wong had to deal with racism in Hollywood throughout her career. She received a star on the Hollywood Walk of Fame in 1960. Designer Emily Damstra said in a statement that the coin was made to look like Wong is surrounded by lights resembling a movie theater marquee.

Black vultures, lynx and wild horses are among the animals being reintroduced to eastern Spain with the launch of a rewilding project spanning 850,000 hectares (2.1m acres) in the Iberian highlands east of Madrid. Rewilding Europe’s 20-year landscape recovery scheme, which covers an area more than five times the size of Greater London, aims to make the land wilder and more nature-friendly. The protected area is the southern part of the Iberian Chain, a mountain range that stretches 500km (300 miles) from the north-west of the country to the Mediterranean in the south-east. The Iberian Highlands Rewilding Landscape project is the 10th to be undertaken by Rewilding Europe, and its first in Spain.