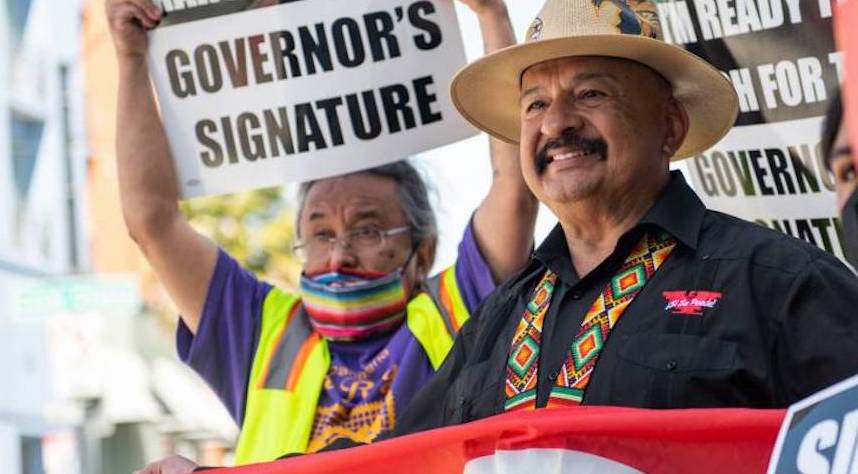 Louie Gutierrez (left) and Roberto Hernandez rally in support of United Farm Workers on César Chávez Street in San Francisco on March 31, 2022, during a César Chávez Day demonstration calling on Gov. Gavin Newsom to sign a bill that would give farmworkers the option to vote by mail in union elections. (Beth LaBerge/KQED)

After vetoing similar legislation last year and threatening to do so again last month, California Gov. Gavin Newsom on Wednesday signed Assembly Bill 2183 into law, making it easier for farmworkers in the state to participate in union elections. The Democratic governor’s about-face on the measure represents a major victory for labor leaders. It follows a monthslong push by United Farm Workers of America (UFW) and the California Labor Federation (CLF). “This is an incredible victory,” said UFW president Teresa Romero. “Starting next year, farmworkers can participate in elections free from intimidation and deportations. ¡Sí se puede!”

Across Europe, more and more bus stops are sporting a new look — with lush green roofs designed to support pollinators. The number of bus stops topped with pollinator gardens is expected to increase another 50% in the UK alone by the end of this year. The “bee bus stops” began popping up in Utrecht, Netherlands in 2019, with over 300 bus stops receiving the makeover. In addition to adding pollinator-friendly plants on top of the shelters, the city also introduced bamboo benches and LED lighting to the bus stops along with more electric buses. Since then, the idea has spread across Europe, and other places are inquiring about the pollinator gardens, too.

You’re Not Broken: People Share Experiences With Intrusive Thoughts To Help Normalize Them

When I was younger I used to think I was dying or that I would get kidnapped by a random stranger, but I kept it to myself because I thought something was wrong with me. I thought that telling people would confirm this fear, so I kept it inside my entire life until I was an adult and learned it was part of ADHD and other disorders. But it doesn’t have to be part of a disorder at all—a vast amount of people just have intrusive thoughts, and a Twitter user, Laura Gastón, is trying to normalize them for others. Gastón tweeted that parents should talk to their children about intrusive thoughts and normalize them so children aren’t afraid that they’re broken.

“I Like Your Hair” is an honest expression of what it feels like to exist as a bald woman in public spaces. Inspired by creative director Natalie Marinides’ real life experiences with alopecia, this project was created in the hopes that the next time someone runs into a stranger with a physical difference, they know what they should — or mostly shouldn’t say. The short-documentary and photo series combines personal anecdotes from four women who live with alopecia. Most have experienced the condition for the majority of their lives, and all have occurrences to share regarding unsolicited comments in public spaces.

by Rosalyn R. LaPier, The Conversation

Who should manage public land that is sacred to Native Americans? That is the question that the United States government and some states hope recent policy changes will address by giving Indigenous people greater input into managing such land. Co-management, as the policy is called, might alleviate the friction that emerges when sacred landscapes are managed without Native American input. Mauna Kea, a 13,802-foot dormant volcano on the island of Hawaii, is one example. The mountain is managed as public land by the state of Hawaii. Native Hawaiians have protested the state’s management of Mauna Kea for decades.