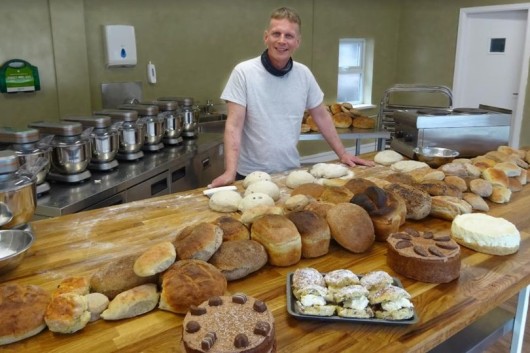 A baker in the English town of Guisborough is reviving an ancient tradition to help his neighbors endure high energy costs. Thousands of years ago, societies built one oven in town where everyone went to bake their bread, and now Ed Hamilton-Trewhitt from Brickyard Bakery is offering to bake Christmas cakes for anyone worried about the energy costs of turning on the oven for several hours. “At this time of year, there can be no greater expression of love than baking the family Christmas cake” said Baker Ed. “At Brickyard, we want to help by reviving a tradition lost to our community for centuries, the community oven.”

by Graeme Green, The Guardian

Decades after the world’s biggest otter disappeared from the country, a kayaking trip revealed a lone male swimming in the Bermejo River. This really is a big animal,” says Sebastián Di Martino, conservation director of Rewilding Argentina, emphasising the “giant” in giant otter (Pteronura brasiliensis). “It can be 1.7 metres long … the biggest otter in the world. Family groups were last seen in the 1980s in the Misiones province of north-eastern Argentina,” Di Martino says. “In the Bermejo River, the last sightings occurred 130 years ago, in 1898.”

How Thailand’s ‘Happiness Farmer’ Built An Oasis Of Simple Living

“Life is easy. Why do we make it so hard?” This is the question that drives Jon Jandai, Thailand’s self-proclaimed “happiness farmer.” In a country where more than 50 percent of the population now lives in cities and farmers face rising input costs, falling crop prices, and mounting debt, Jandai offers an alternative that has attracted more than 10,000 students: a life of self-reliance that consists of building earthen homes, learning to farm indigenous Thai fruits and vegetables, and growing more than enough food for yourself in a few hours of work a day.

If you fish in your pocket or purse for a U.S. quarter today, there’s a chance you’ll see Wilma Mankiller’s face. She was the Cherokee Nation’s first female principal chief, and she inspired generations of Cherokees and young Native people like me. In 2022, Mankiller was one of the first women honored by appearing on a series of quarters, along with renowned poet and activist Maya Angelou and physicist and astronaut Sally Ride. Mankiller’s quarter, issued in the summer of 2022, marks the first time that a Native American woman has been featured on a U.S. coin since Sacagawea appeared on the golden dollar in 2000.

The Law That Led To Trump’s Family Separation Crisis Has A Racist History. Now These Attorneys Are Fighting Against It In Court

Kara Hartzler had a front-row seat to the impact of the Trump administration’s “zero tolerance” policy that was being used to separate thousands of immigrant parents and their children. Hundreds of distraught parents faced criminal charges of entering the US without authorization, which former president Donald Trump used to separate them from their children. The parents were charged with illegal entry and were then often sentenced to time served and returned to the same Customs and Border Protection facility where they had been detained. By the time the parents arrived, their children had been sent away. To this day, hundreds of families remain separated.

How The Fantastic Four Took Double Dutch To New Heights

Dutch settlers may have brought Double Dutch to America, but it was Black girls who put it on the map, says Lauren Walker, president of the National Double Dutch League. “Double Dutch is Black girl magic. It came from a union of young girls in their community getting together to socialize, and to engage in each other’s dreams and ambitions.” They also put their own spins on popular rhyming songs, like “Miss Mary Mack,” and brought them into the ropes, says ethnomusicologist Kyra D. Gaunt. “You learned from your elder siblings, you learned from your same-age peer age group, in schools, hanging out on the stoop, on the sidewalk.”