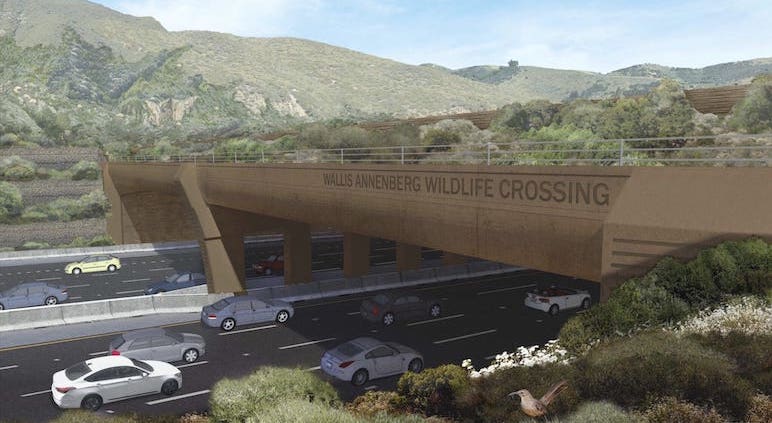 This month, the world’s largest wildlife overpass — the Wallis Annenberg Wildlife Crossing — will begin construction across a multi-lane highway at Liberty Canyon in the Santa Monica mountains. The 210-foot long, 165-foot wide green bridge will allow animals like mountain lions, coyotes, snakes and toads to safely cross U.S. Highway 101 near Los Angeles, reported The Guardian. It will be surrounded by an acre of native plants, and sound walls covered with vegetation will be put in place to help shield nocturnal animals from noise and light.

Two former cattle ‘stations’ in the north Australian state of Queensland totaling 509 square miles (131,900 hectares) have been purchased by the government as part of their program to return ownership of land on the Cape York Peninsula back to the indigenous people. Environment Minister Meaghan Scanlon said at the time that these two areas have significant, undisturbed ecosystems that will become part of a protected area that includes tropical rainforest, heathlands, warm savannah, and freshwater ecosystems.

An anonymous Frenchman who won 200 million euros (the U.S. equivalent of approximately $218 million) in the Euromillions lottery in 2020 has chosen to use his winnings to preserve and revitalize Earth. The man, nicknamed “Guy” by French lottery group Françaises des Jeux (FDJ), has not identified himself publicly, but has created a foundation called Anyama, named after an Ivory Coast city, for the purpose of protecting the planet. He shared an open letter on the Anyama website explaining why he’s using his windfall this way.

Owners of a nature resort in British Colombia have put renovations on hold to open up the stunning 81-acre property exclusively for housing Ukrainian refugees. With their goal of hosting 100 people, the owners and operators of The Grouse Nest on Vancouver Island see the fleeing masses as equivalent to their own people, since Brian’s family comes from Ukraine. “We’ve got 19 people booked to be coming in about two to three weeks,” Brian told Global News Canada. “We’re in a position, in a place, in a time where we could help make a bit of a difference.”

Not Extinct After All: First ‘Widely Accepted Sighting’ Of Ivory-Billed Woodpecker Since 1944

With a call that has been described as that of a “tin trumpet” and making a double tap sound with its long bill, the ivory-billed woodpecker (Campephilus principalis) is the third largest woodpecker in the world and the largest north of Mexico, according to All About Birds. The elusive woodpecker had apparently last been seen in the Big Woods of eastern Arkansas in 2004, the Arkansas Democrat-Gazette reported, but it was still determined to be extinct by the U.S. Fish and Wildlife Service (FWS) last year.