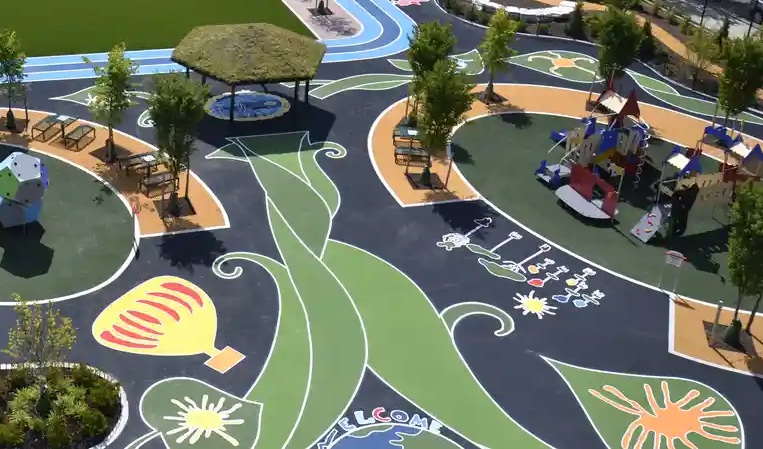 Piagentini and Jones after the transformation. Photograph: Maddalena Polletta, courtesy of Trust for Public Land

Out With Asphalt: US Schoolyards Transformed Into Green Oases – In Pictures

by Aliya Uteuova, The Guardian

Schoolyards are supposed to be somewhere kids want to play. But if your schoolyard is little more than an empty expanse of asphalt – merely boring when the weather is fine but mercilessly hot and unprotected when the mercury rises – then it becomes the opposite: a place kids want to avoid. This was the reality for roughly 300 US public schools until they joined a program that completely transformed them.

How A Brazilian Town Took A Bet On Basic Income

Maricá, a small seaside city of 160,000 people, is making a tremendous impact on the lives of its citizens. Over the past nine years, various social programs have been instigated, especially a basic income program called Renda Básica de Cidadania, which is paid in a local social currency named mumbuca—named after both a river that runs through Maricá and also one of the local Indigenous peoples.

A blind girl has amazed doctors after she regained her sight and ‘cured herself’ of a usually life-long brain condition. Evie-Mae Geurts was registered blind at just a few months old. Doctors discovered she had hydrocephalus and the pressure inside her head was 32 times the normal level. The continued pressure meant her sight was gone forever, and she’d likely never learn to walk and talk. Against all the odds, not only did her sight return when she was a toddler; Evie-Mae Geurts also learned to walk and talk.

Can our immune systems keep up with the speed with which we live our lives? Recent viral outbreaks following the advent of globalization and modern travel also means that we must shift our attention to newer ways of safeguarding public health. Sometimes, that means returning to older ways. Here are six impressive herbs with antiviral activity to include in your diet and home remedies.

‘1-4-3 Day’: Pennsylvanians Celebrate Kindness In Honor Of Mister Rogers And His Favorite Number

The number 143 was very special to Fred Rogers. To the star of “Mister Rogers’ Neighborhood,” it meant, I love you. “It takes one letter to say I and four letters to say love and three letters to say you. One hundred and forty-three,” he was fond of saying. Three years ago, Pennsylvania Governor Tom Wolf declared May 23, the 143rd day of the year, to be 1-4-3 Day in the state, celebrating Rogers’ commitment to kindness. “Imagine what our real neighborhoods would be like if each of us offered, as a matter of course, just one kind word to another person,” Rogers once mused.