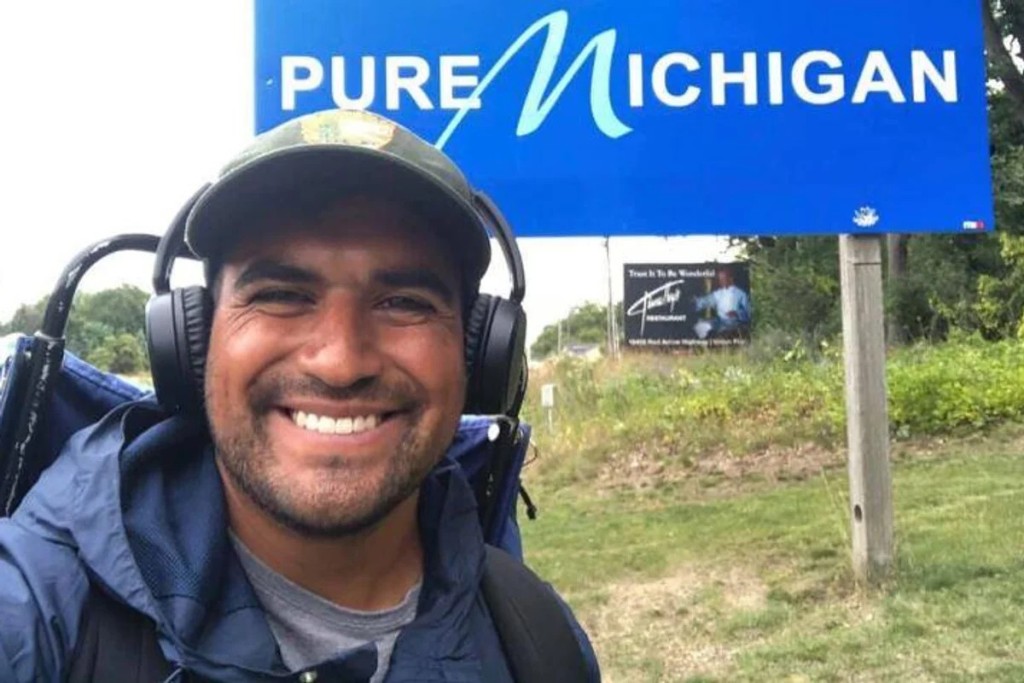 via TravisHikesAroundLakeMI/Facebook. 30,000 vets have died from suicide since 2011 — that’s four times the number killed in action. Travis Snyder pledges to keep walking as long as he’s needed to raise awareness for veteran suicide prevention.

Marine veteran Travis Snyder was enlisted in the military for six years and served in Afghanistan as a corporal and is no stranger to the pain of veteran suicide. Snyder lost a friend and fellow veteran to it in 2019. He’s also had his own mental health struggles. After leaving the military, he discovered his new purpose in life, to help other veterans dealing with mental health issues. “Up until that point in my unit, we had lost others before my time of service, but that was my first time experiencing loss up close. Once we lost Jeff I would say I just felt led to do something and walking and hiking was the best thing I knew how to do,” Snyder told WGVU News.

Cycling Like The Dutch Would Reduce World’s Carbon Pollution More Than The Annual Emissions Of Canada, Study Finds

In the Netherlands, cycling is a way of life and is so common that there are more bikes than people, according to BBC News. As many as 70 percent of journeys are by bike in cities like The Hague and Amsterdam. Cycling can be a significant way to reduce a person’s carbon footprint, as using a bike instead of a car as little as once per day reduces an average person’s transportation emissions by 67 percent, according to University of Oxford researchers, reported Bloomberg. An international research team has recently shown that almost 700 million metric tons of carbon pollution would be saved each year if everyone rode their bikes every day like the Dutch.

What doesn’t need irrigation, requires no pesticides, and needs only a third of the fertilizer of wheat? It’s a potential big-problem-solving grain called sorghum, which in France is growing strong while all other grain fields are withering and baking under record temperatures. Eudes Coutte, a sorghum farmer in France, expects around 3-4 tons per hectare under the current drought conditions compared to 5-6 under normal conditions. However, Coutte believes he has a competitive advantage as he doesn’t need to fork over the additional input costs of irrigation, pesticides, and fertilizer. Between 2016 and 2021, production of this gluten-free grain grew nearly 100%.

The Biden administration is turning the Obama-era program Deferred Action for Childhood Arrivals, or DACA, into a federal regulation — a move aimed at protecting it from more legal challenges. The rule is scheduled to take effect October 31. DACA has shielded hundreds of thousands of immigrants who were brought to the U.S. as children from deportation and granted them work permits. Several Republican-led states have led lawsuits attempting to gut DACA, arguing the program is illegal. Last year a federal judge in Texas blocked new DACA applications; the 5th Circuit Court of Appeals is expected to issue an opinion on a challenge to that ruling later this year.

The world’s smallest and most endangered sea turtles have hatched in Louisiana’s wilds for the first known time in more than 75 years, officials said Wednesday. “Louisiana was largely written off as a nesting spot for sea turtles decades ago, but this determination demonstrates why barrier island restoration is so important,” Chip Kline, chairman of the Louisiana Coastal Restoration and Protection Authority, said in a news release. Crews monitoring the Chandeleur Islands — a chain 50 miles (80 kilometers) east of New Orleans — to help design a restoration project found tracks of females going to and from nests and of hatchlings leaving a nest.