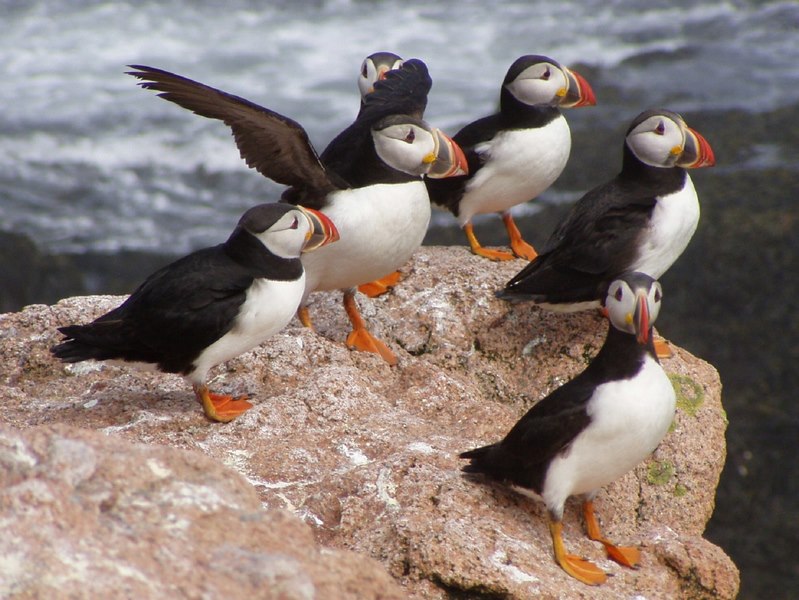 50 years worth of conserving the tern and puffin populations in Maine has created a stable colony of thousands of breeding birds. Located on Petit Manan and other small islands off the coast, the birds have absorbed the worst of climate change during the 2000s, and are returning just as before to large numbers of breeding pairs and fledgling chicks. Even the wildest gambler wouldn’t have put a penny on the Atlantic puffins of Maine making it out of the 20th century alive, after they were hunted down to just 2 birds by 1902. Today there are more than 1,300 pairs of puffins across several islands, mostly on Eastern Egg Rock, Seal Island, and Matinicus Rock.

Everyone needs a pension project, and for the first-ever female architect in Pakistan, hers has taken on a critical infrastructure need—disaster relief housing. Yasmeen Lari, now 81, is the cofounder of a nonprofit called the Heritage Foundation of Pakistan, which is making bamboo huts for Pakistanis stricken by floods. Her retirement in 2005 was interrupted by a catastrophic earthquake that saw her helping locals to shelter themselves. This, she told Fast Company, is where she came up with the idea for her low cost, low carbon, conical shelters of bamboo. These 12×12 huts have room for 5 people, and can be assembled quickly with rope and reed mats for the roof.

The U.S. government has joined a ski resort and others that have quit using a racist term for a Native American woman by renaming hundreds of peaks, lakes, streams and other geographical features on federal lands in the West and elsewhere. New names for nearly 650 places bearing the offensive word “squaw” include the mundane (Echo Peak, Texas), peculiar (No Name Island, Maine) and Indigenous terms (Nammi’I Naokwaide, Idaho) whose meaning will elude those unfamiliar with Native languages. The changes capped an almost yearlong process that began after Haaland, the first Native American to lead a Cabinet agency, took office in 2021.

A regional train operator in Germany is becoming the first company to utilize 100% hydrogen fuel cell trains on their lines. But if almost all train travel is electric now, and even those few diesel trains that still operate produce a mere third of the CO2 per passenger as a car, what’s the need for big investment into hydrogen in rail travel? In Germany and the U.S., some regional lines still use diesel-powered locomotives, which expose passengers inside the cars and at the stations to more harmful air pollutants like nitrogen oxide, than standing near a busy intersection in a city.

Billions of dollars are spent each year on food and beverage advertising in order to sway people’s food choices. In an effort to reduce the consumption of meat and the greenhouse gas emissions it produces, the Dutch city of Haarlem will become the world’s first to ban advertisements for meat in public spaces. Haarlem is located to the west of Amsterdam. Haarlem added meat to a list of goods that were determined to contribute to the climate crisis, reported The Guardian. Advertisements for meat will be prohibited in the city of about 160,000 beginning in 2024.