After nearly 30 years of collecting rare artifacts, this Detroit teacher launched a mobile museum that travels the country educating people on African American history all year round.

As a social studies teacher in Detroit in 1994, Khalid el-Hakim used African American artifacts he collected to supplement information about Black history he found lacking in middle school textbooks.

It was a charge, el-Hakim says, by Minister Louis Farrakhan at the Million Man March in 1995 to men to go back to their cities and “join a community organization and try to make some type of contribution to our community,” that was the catalyst to start a mobile museum.

El-Hakim went from having tabletop displays at meetings of the local organization he joined to setting up exhibits for various organizations and institutions—first throughout the city and then across the state and nationwide.

His Black History 101 Mobile Museum travels throughout the year from coast to coast sharing African American history through the ages—from the trans-Atlantic slave trade to the Civil War, Reconstruction, Jim Crow, the civil rights and Black Power movements, hip-hop and Black Lives Matter—with artifacts he’s collected from around the globe.

“I came to learn that not only are my students missing Black history, but there’s a whole bunch of people who have not been exposed to Black history,” el-Hakim says. “As word spread about the museum and the visibility grew on a national level, the audience grew well beyond my expectations—in size and diversity.”

Today, the mobile museum’s attendees get to experience the exhibits free of charge at the expense of host institutions that bring in el-Hakim at a nominal fee.

Before the museum’s 2018 tour, which began last month and will exhibit artifacts from 1968, el-Hakim and I chatted briefly about the museum, its significance today, and the impact he believes it’s making.

Zenobia Jeffries: What made you start collecting?

Khalid el-Hakim: I started collecting in 1991 after taking a sociology class with David Pilgrim at Ferris State University. He’s the one who started the Jim Crow Museum of Racist Memorabilia. I took his class, prior to him starting his museum. He was just a collector at the time, and he was using artifacts to teach about the history of racism in America. I found that his methodology of using artifacts to teach about very controversial subjects like racism was an effective way of teaching about racism.

But to teach that without the context of other people at the time and seeing how they were responding to White supremacy and racism, it just made more sense to include other material.

So, I took it to a different level [to show] what Booker T. Washington or W.E.B. Dubois or other individuals were doing during the Jim Crow era. It just made more of a powerful impact for me to see Aunt Jemima imagery next to somebody like a Paul Laurence Dunbar, and what he was doing at the time. So, I just started collecting everything that had something to do with the Black experience in America.

Jeffries: How do you decide what items you’re going to exhibit?

el-Hakim: So, the exhibits are tabletop exhibits. They’re usually about 10 tables of 150–200 artifacts. Themes have emerged over the years based on the growth and diversity of the collection.

In the early years it was just a wide array of material in one big exhibit. I decided to make thematic exhibits to be more nuanced in my approach to teaching history and to amplify the artifacts that may otherwise be overlooked in a larger exhibit. Currently, we have the following themes: women, hip-hop, Jim Crow, civil rights/Black Power, music, leadership, sports, and science/technology.

For ’68, it’s the 50th anniversary of Dr. Martin Luther King’s assassination, so there’s a lot of King material in the exhibit. Also you have the 1968 Olympics with Tommie Smith and John Carlos, as well as musical performers of that year, like Sly and the Family Stone, Jimmy Hendricks, James Brown’s “Say it Loud I’m Black and I’m Proud.”

Jeffries: Where do you get your pieces?

el-Hakim: The majority of the pieces come from me going into antique shops and used bookstores, and record shops—not just in the Detroit area. One of the ways I was able to travel to so many different places [and pick up so much material] is because I worked in the entertainment business for 20 years touring with hip-hop groups and poets.

So, anytime I was on tour, around the United States, or overseas—in Europe, Australia—I was able to go into different antique shops when those guys were out doing whatever.

el-Hakim: All of them are. We build on the historical context of the time, starting with the trans-Atlantic slave trade. So, there’s original shackles in the exhibit, and there’s original advertisements for the runaway enslaved Africans.

There’s Jim Crow-related material. There are things from the Reconstruction era. There are original photos of lynchings, and postcards of lynchings that are very emotional. The Mammy images, the alligator bait phenomenon in America is represented. There’re a lot of different types of material.

Jeffries: What is the rarest? Something where folks are like, “Oh my God, how did you get that?” 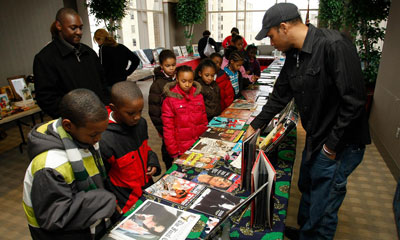 And then from hip-hop: Ice T, Chuck D, KRS-One, MC Lyte, Yo-Yo, Ice Cube. I have original photographs of Tribe Called Quest. Everybody from Busta Rhymes to Redman and Method Man.

There’s a lot of rare material. I have a collection of hip-hop photography from Ernie Paniccioli, who’s considered to be hip-hop’s pioneer photographer. I guess he would be the Gordon Parks of hip-hop, if you can say that. I have about 60 or 70 original photographs from him, of everybody from Queen Latifah to 17-year-old Jay Z and young Kanye West.

I have a lot of stuff from the Black Panther Party: original photographs, newspapers, coats.

Original artifacts and photographs from the Nation of Islam—early years. Letters written by the Honorable Elijah Muhammad. I have a very early letter written by Minister Farrakhan from the ’50s when he was still Louis X, a minister in Boston.

There’s a lot of very unique material. I even have clothing items. I have a hat from Aretha Franklin. I have one of Minster Farrakhan’s suits.

Jeffries: Why is there such a heavy focus of items on hip-hop?

Jeffries: Are the responses you’re getting now any different from what you were getting before Trump?

el-Hakim: I think it’s more real to people now that Trump is in office. Prior to Trump you could see some of this material and you would think that you were kind of disconnected from it. Because I have a lot of White supremacist and KKK material. I have an original Klan hood, and Klan bumper stickers, business cards, original photographs from the Klan.

But over the past year, you have a lot of people seeing it and making that connection between Trump and his supporters, and how there’s very much of a White supremacist undertone to a lot of the campaigning that went on, and what you’re seeing at some of the rallies and in some of the speeches that he’s doing. His response to Charlottesville. So you see it. It’s more real to people now.

el-Hakim: Really it’s just me presenting the materials so that people can make their own interpretations through their own lived experiences.

I want us first and foremost to become critical thinkers, which is key.

And then on the flip side, if you walk through that exhibit, like [what] happened in Pennsylvania just a few years ago, and you’re a White female college student, and you walk into that exhibit and you start crying because you see KKK material. And because of your lived experience of seeing your father and your grandfather as Klansmen, and this material that you see represented in this is exhibit is what you see at home every day. I can’t minimize or disregard that being your lived experience.

Jeffries: What do you hope your attendees take away?

el-Hakim: I want us first and foremost to become critical thinkers, which is key.

I don’t want this to be just information that I’m giving people and they getting my opinion. I want them to see the material interpret it for themselves. Ask critical questions and have dialogue with me, and other people who are in the space.

I also want to spark people to go out and start their own research. If you see a name that you haven’t seen before, or an object that just resonates with you—and one thing I’ve learned is that different artifacts will resonate with different people based on their lived experience—I want you to walk away and do your own research, and learn something that you did not know about history already.

Zenobia Jeffries wrote this article for YES! Magazine. Zenobia is the racial justice associate editor. Follow her on Twitter @ZenobiaJeffries.

See also:
Me Too Creator Tarana Burke Reminds Us This Is About Black And Brown Survivors
100 Years Ago, Black People Marched Down 5th Avenue To Declare That Black Lives Matter