How A Stock Photography Project Is Confronting Fat Bias

For people whose bodies are often the target of public scrutiny, representation in something as simple as a stock photo can be revolutionary. 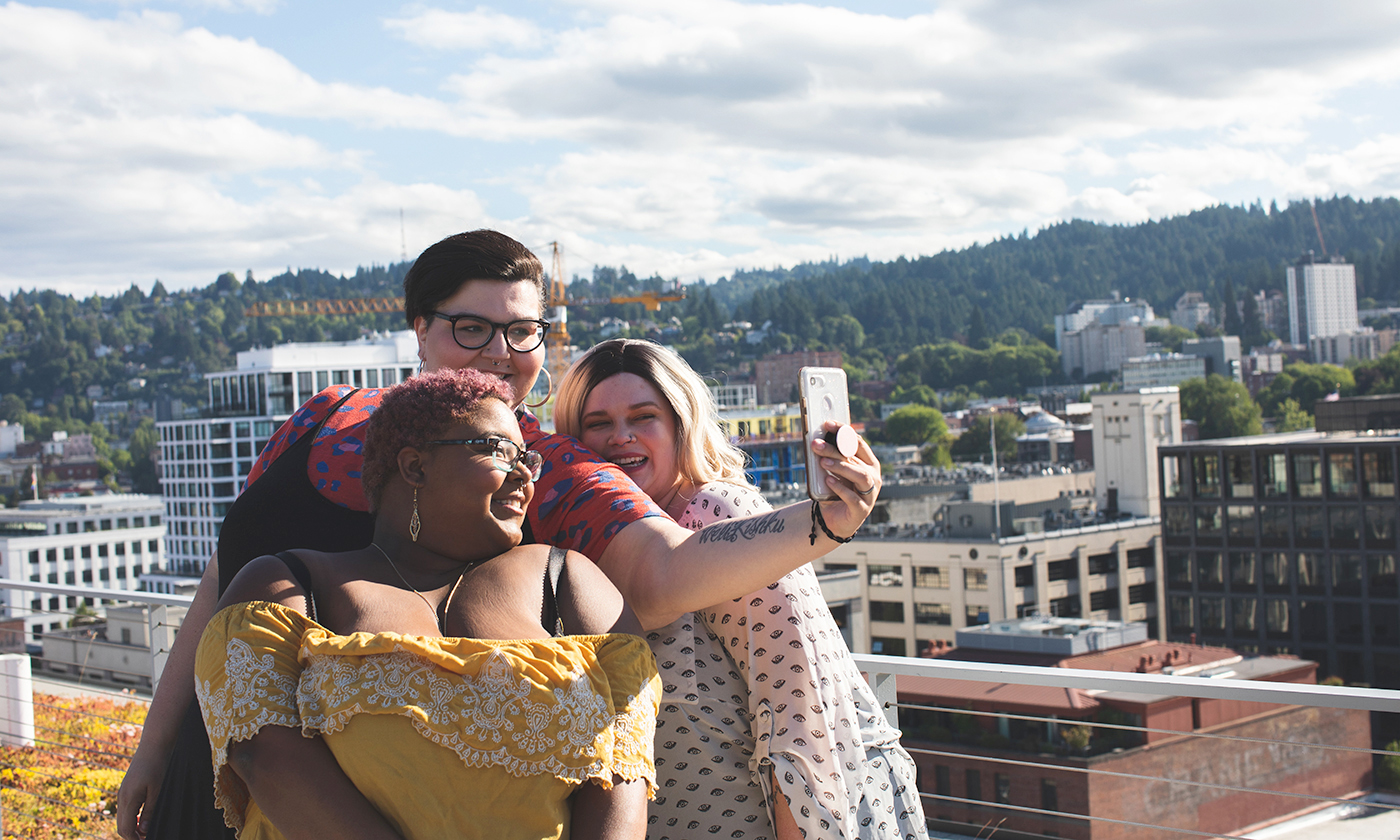 The co-working office Rebecca Alexander has chosen for her latest collection has all the hallmarks of good stock photography—minimalist space, clean lines, lack of bold colors. On this Saturday, she is walking around with a detailed list of shots of plus-size folks in a work environment, confident in her directives to the photographer. She knows what she wants.

A model named Hannah is leaning against a wall, phone in hand. “We need a powerful Hannah taking a call,” Alexander says. Hannah gives her best “in charge” face. “Great, now pretend you’re on a phone call that sucks. We owe it to the internet to give people a choice.”

Alexander is on a mission to diversify media. As the Portland-based founder of AllGo, an app for the plus community to rate the comfort and accessibility of public spaces, she is keenly aware of the lack of positive visibility for bigger bodies. Her project, the first free, exclusively plus-size stock photo library, is a small start in confronting America’s pervasive fat bias. 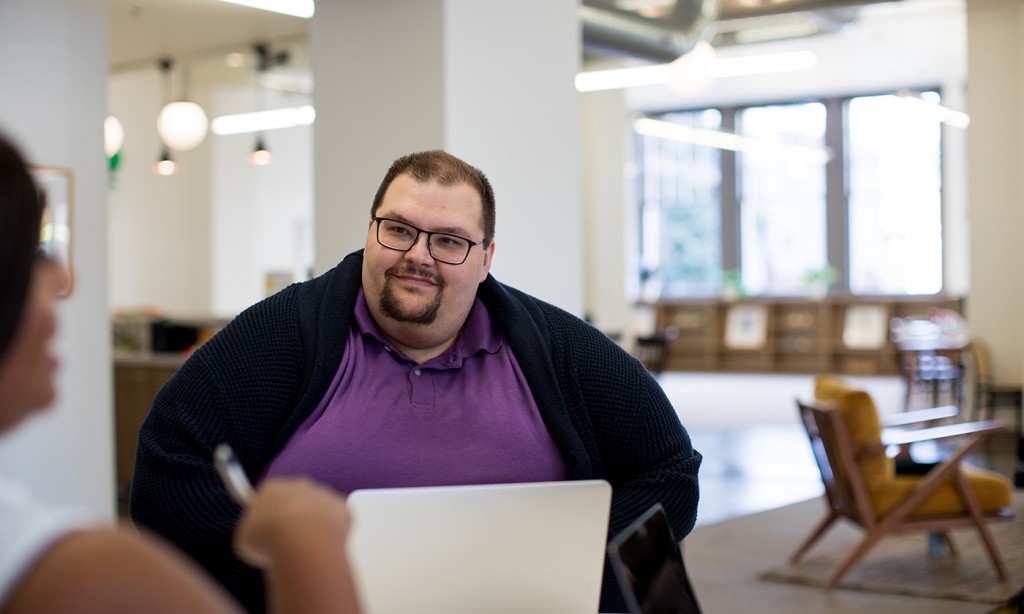 A recent Harvard study shows that although rates of bias against sexual orientation and race have gone down over the past decade, they’ve gone up for weight. We see this play out in medical spaces, where doctors routinely blame weight for all health issues, in workplaces where plus-size employees are less likely to be promoted, and in mainstream media, where thin bodies are the norm.

“Stock photos are not going to solve these deep-rooted problems,” Alexander says. “But they will inspire people to do better.”

These photos are a microcosm about how we culturally think about fat people, says the writer known as Your Fat Friend, whose searingly honest writing has garnered 34,000 followers on Medium and a column on Self.

“Everywhere you look, there are these stories that are so incredibly limiting. They’re focused on the ‘human experience,’ which is overwhelmingly White, almost exclusively able-bodied, and always thin,” she says. “Thin people can speak to the human experience. Fat people can only speak to the tragedy of being fat. There is a level of normalcy and routine that is implicitly denied for us.”

Stock photos by their very nature catalog the mundane, and their inauthentic authenticity is designed to appeal to the widest range of people. Lindy West once wrote in Jezebel that a stock photo “needs to be as vague as possible, and play into the stories that people already know” for it to have marketplace value.

Alexander hopes AllGo’s images tell a new story—that of plus-size people simply living their lives. “I want people to know they deserve to exist, and they don’t need to change,” she says. 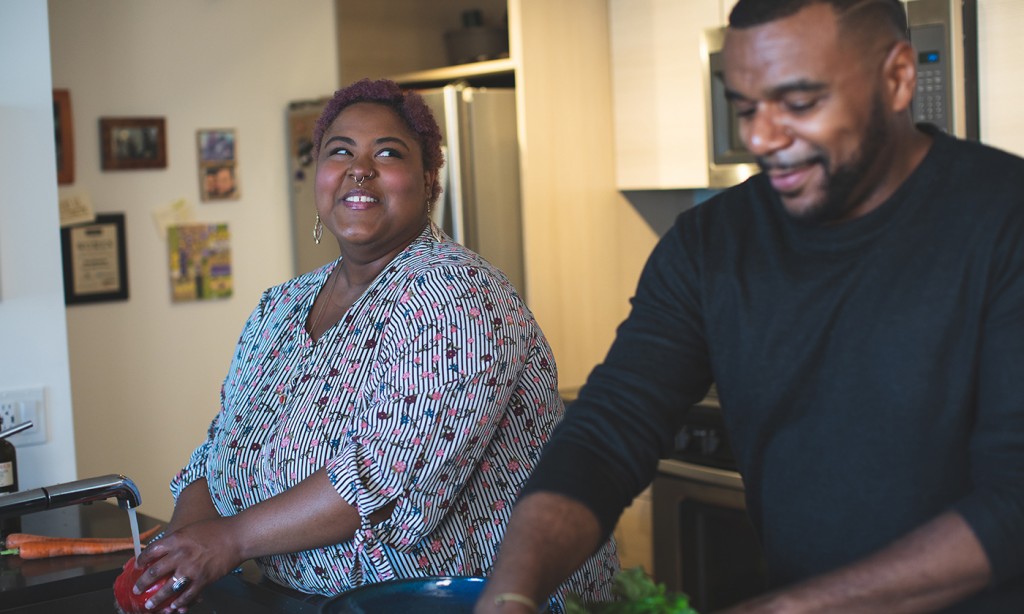 In recent years, stock photos have slowly been getting more inclusive, whether through individual-led projects such as Representation Matters, or media companies like VICE. This past summer, Alexander decided to create a photo library for AllGo starting with The Home Collection that featured ordinary moments like laughing with friends, or reading a book. She reached out to her networks for volunteers.

Mostly women responded to be models as the body positive community for men is small but growing. Jazmin Webster, for one, wanted to participate so younger generations can have what Webster didn’t have growing up. New to plus-size fashion modeling, they’ve struggled most of their lives with low self-esteem and depression.

“This opportunity showed me the negative voice in my head is wrong,” Webster says. “It’s one of the first things to make me feel like I’m beautiful, and I’m going to be OK.” 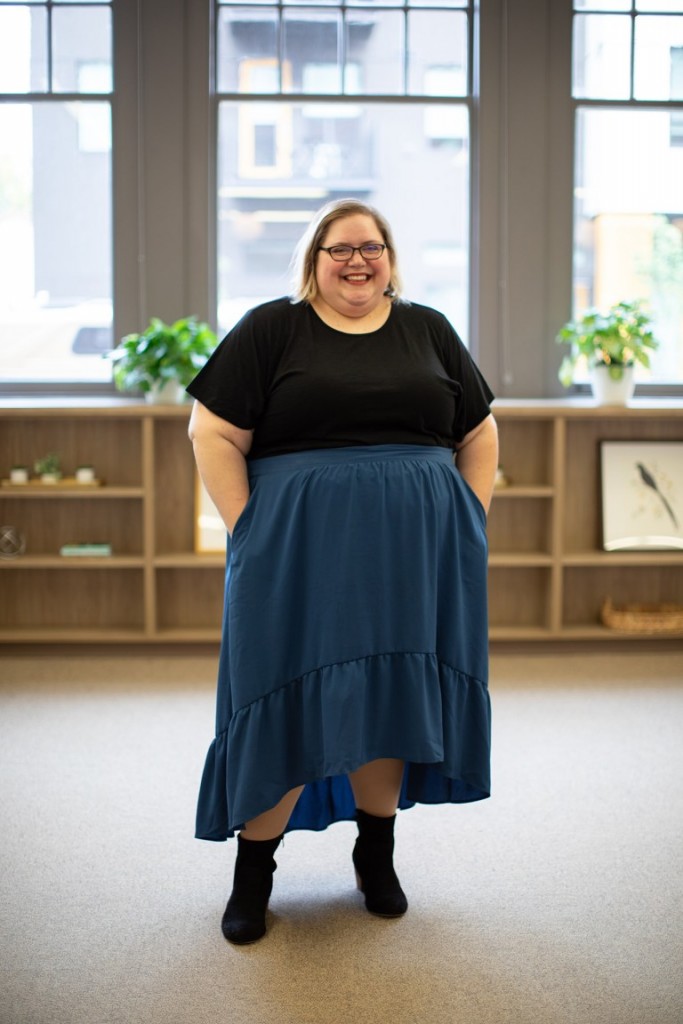 Local photographer Michael Poley volunteered his services, and together he and Alexander decided to offer the images for free use. In August, they released The Home Collection on the stock photo site Unsplash. The photos were downloaded nearly 4,000 times in one day. Since then, they’ve shot The Swim Collection (where Alexander makes a cameo) and The Office Collection based on crowdsourced suggestions.

The photos collectively now have more than 76,000 downloads and over 24 million views on Unsplash alone. They’ve been used for everything from social media posts to dating sites, work presentations to blogs, and more.

Dan is the founder of Do Better Consulting and social media manager for Be Nourished, an educational platform and body liberation community. A large part of building that community is representing its people: You can’t layer the quote “We don’t need you to perform health” over a photo of a thin White woman jumping, hair blowing in the breeze, Dan says.

Dan also says every single fat person knows what it’s like to not be included in a picture. At Dan’s former job in a hip Portland coffee shop, tourists would often wait for them to walk out of the frame before taking out the camera. For Dan, then, AllGo’s photos are “absolutely an active act of resistance.”

Still, Alexander and some of the models experience an ever-present fear of being mocked. “We’re all taking a risk,” Alexander says. “Part of my concern when I see that photo of myself in a bathing suit being downloaded a lot is, ‘What corner of the internet is laughing at me right now?’”

But Alexander is motivated to keep going in spite of the fear. She and Poley plan on shooting more collections of the plus community going out, at college, during holidays—with greater representation of race, age, gender expression, and ability. The suggestions from their network keep coming, some more niche than others, like “older plus-size women reading romance novels.”

Alexander has a lot of requests to keep up with, but she doesn’t feel they need to be the only ones creating these stock photos.

“It’s a gigantic gap that needs filling, which feels promising to me. You get to start to imagine all the possibilities,” the writer known as Your Fat Friend says. “It’s so strange to say, but it actually does feel revolutionary to see a fat person hanging out with another fat person having a drink, talking about their day.”

Celeste Hamilton Dennis is a solutions-focused journalist, essayist, and fiction writer based in Portland, Oregon.

Today has it all, a smorgasbord of celestial delights. The waxing Pisces Moon forms a dreamy early morning conjunction with Neptune. Sensibilities are primed for mystical experiences. A lunar alignment with Pluto empowers idealists and...

END_OF_DOCUMENT_TOKEN_TO_BE_REPLACED

The Wheel of the Year: A Path of Spiritual Awakening

Energy Medicine: Dissolving Your Stress Away

Automatic Brain: The Magic Of The Unconscious Mind