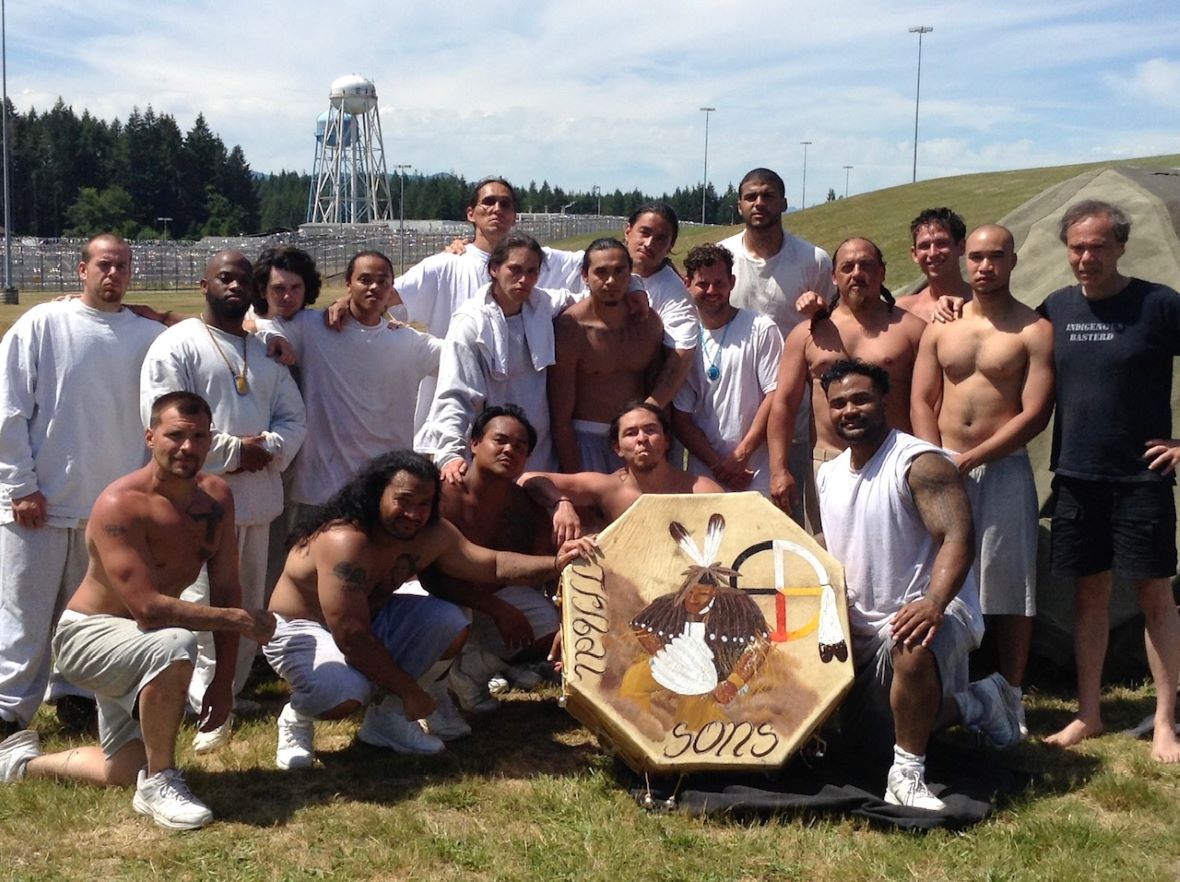 Members of the Tribal Sons Native American spirituality circle at Washington Corrections Center near the sweat lodge at the 2017 change of seasons Inipi ceremony. The author, Frank Hopper, stands to the right in the black t-shirt. Photo by Frank Hopper

“In the not-too-distant future,

There was a guy named Joel,

Not too different from you or me.”

If you know the tune that goes with these lyrics, I consider you my friend.

Mystery Science Theater 3000, the TV show with movie-riffing puppets from the early 1990s, whose theme song began this way, became an important part of my life in 1992. I was an inmate at Washington Corrections Center in Shelton, Washington, and discovered the show while flipping through the channels on the tiny TV in my cell.

I remember recognizing an old black-and-white monster movie that came on, called Attack of the Giant Leeches. I hadn’t seen it since I was a kid, and memories of watching it with my brother late at night came flooding back.

But also on screen were the silhouettes of three characters talking back to the movie and making fun of it. They watched as a giant bloodsucking leech pulled away after feeding on the neck of a beautiful young woman. Then one of the silhouettes pretended he was the woman.

I burst out laughing. I was hooked.

The Tribal Sons, My Prison Family

I was doing 22 months on forgery and drug possession charges and, as an Alaska Native member of the Tlingit tribe, I had joined the prison’s Native American spirituality circle. We called ourselves the Tribal Sons and met twice a week to drum and sing. Once a month, we went out to the sweat lodge on the prison property and held an Inipi purification ceremony.

I knew almost nothing about my Tlingit heritage and culture, but the brothers in the Tribal Sons didn’t mind. I was Native. That was enough. They would teach me their traditions until someday when I could learn the traditions of my own tribe.

The ceremonies and traditions we practiced were mainly from the Plains tribes, the Lakota, Ojibwe, and others. The most powerful of these traditions was the Inipi ceremony, commonly called the sweat lodge.

The ceremony is broken into four rounds. Red-hot stones are brought into the lodge at the beginning of each round and door is closed. The only light comes from the glowing stones. Water is poured on them, and the lodge fills with steam.

I remember being overwhelmed by the heat at my first sweat. I pressed my face to the ground where it was slightly cooler and pulled in air through the blades of grass, the heat holding me down like a giant hand. The sound of singing came out of the darkness, and then the sound of a brother praying to Grandfather Sky, Wakan Tanka, the Great Mystery, for strength.

“A’ho!” I shouted in solidarity. To me, saying that came to mean, “I stand with you.”

The pain made all unimportant things dissolve. My name was gone, my identity, too, my past…gone. All that mattered was the suffering I felt as I clung to Grandmother Earth for comfort while being surrounded by the heat, which was the power of Grandfather Sky. That’s all there was. There was nothing else. I felt free.

Gradually my experiences in the sweat lodge rewired me. I began thinking like an Indian.

I didn’t talk to the brothers about Mystery Science Theater 3000 (or MST3K to us fans of the show). I loved it and never missed an episode, but for some reason I felt guilty about it. The show represented my youth growing up in the 1960s and 1970s, a time for me when overcoming the stigma of being Indian was of utmost importance. I was raised thinking I should become just like a White person, to assimilate.

Now the very idea of assimilation seems ludicrous. I was reborn in the sweat lodge and my old life is gone. MST3K felt as if it had come from that old life. It didn’t seem very warriorlike.

The show’s premise is that a janitor working at an laboratory called the Gizmonic Institute is kidnapped by his evil scientist bosses. They shoot him into space and imprison him in an orbiting spacecraft called the Satellite of Love, where they force him to watch terrible movies while they monitor his mental responses, presumably as some sort of mind control experiment.

To fight back, the janitor, named Joel Robinson, built several sentient robots to keep him company. Together with two of them, named Crow and Tom Servo, he watches the movies, and the three make fun of them as a way of foiling the scientists’ attempts to control them.

The show reminded me of when I was little and my older brother Del would watch old monster movies with me. He’d make fun of them and I’d laugh. When I was alone the films scared me. But when Del watched them with me, they were funny. Del showed me humor is courage.

That’s what I got out of MST3K. When I watched it, I felt as if Del were there with me. I felt like a little boy, safe with his big brother. It was an intensely personal experience that I kept to myself.

Over the years, I became a fan and watched as the show endured through several iterations. In 2019, I attended a live performance in Seattle where the show’s creator and star, Joel Hodgson, reprised his role as Joel Robinson.

Then I stumbled across a news story about how MST3K had sponsored a fundraiser for a Native American youth center in Minneapolis called Migizi. The center was gutted by fire during riots in the summer of 2020, and MST3K raised more than $50,000 to help the organization rebuild.

I was floored. The two parts of my life that I discovered in prison, Native American spirituality and MST3K, had never connected before. They were like beloved relatives from different parts of my family that had never met each other. Now I discovered the two actually had met! And they seemed to get along! I felt exhilarated.

According to Jacob Vang, the director of marketing and communications at Migizi, the team created a donation account through GiveMN, a non-profit fundraising organization in Minneapolis. Beginning in July 2020, MST3K rallied its fan base on the MST3K.org website. Fans who donated to the account received special prerelease access to two new riffing short films. These shorts, which were released to the public in October in honor of Indigenous People’s Day, had been produced with entirely donated labor.

I wanted to find out more, and also to thank Joel Hodgson. With the help of Vang at Migizi and Sharyl Volpe at the production company, Alternaversal, I was able to speak on the phone with Joel, something I’d never thought in a million years I’d ever do.

“This really started after the George Floyd riots,” Joel told me.

I had never known before that MST3K had begun in Minneapolis. Joel heard about the rioting from an MST3K cast member who lives there named Yvonne Freese.

“I was just talking to her,” Joel said, “saying, ‘Geez, I’d really like to help out and do something. What do you think?’ She was really the one who picked up on Migizi.”

I contacted Yvonne Freese, and she filled me in a bit more.

“I live fairly near George Floyd Square,” Yvonne said, “so I was pretty involved with the community response to the murder of George Floyd. Yeah, it impacted me.”

Yvonne helped board up businesses and brought food to those in need. She also participated in protests against the Minneapolis Police Department.

“I suggested we partner with Migizi to give something back,” she said. “And Joel really wanted to do something to let the community know we care.”

“He’s named after a Native kid named Tommy Crow,” Joel said. “I always thought that was such a cool name.”

I’ve always liked the web-headed robot Crow. He was the silhouette who uttered the first MST3K riff I heard years ago in prison. To find out he was a brother made me feel proud. I felt moved to testify.

“When I was in prison the show meant a lot to me,” I told Joel. “I got to the point where I would sing along with the theme song at the beginning, and I got to know it by heart. Not only did it show me how I could use humor as a form of resistance, but it was very comforting. I just wanted to let you know that I appreciate the work you’ve done, and I just wanted to thank you for it.”

“Hey, of course, man. I really appreciate it,” he said. “It’s super important to me that we try to represent Native people. It means a lot to me. So thank you.”

Minneapolis is the birthplace of AIM, the American Indian Movement. It’s a center for Native resistance against the Canadian company Enbridge and its Line 3 pipeline. It’s the location of one of the most egregious examples of police racism in recent history.

And it’s the birthplace of a goofy show that made me feel better when I was incarcerated, a show with roots that go deep and a heart that cares.

Frank Hopper, Kaagwaantaan, is a freelance journalist covering Indigenous people. He focuses on the Pacific Northwest/Alaska region. His work has appeared in Last Real Indians, The Stranger, and extensively in Indian Country Today. His self-titled YouTube channel features videos about Native issues.