How Migrants Sent To Massachusetts Found Aid And Community 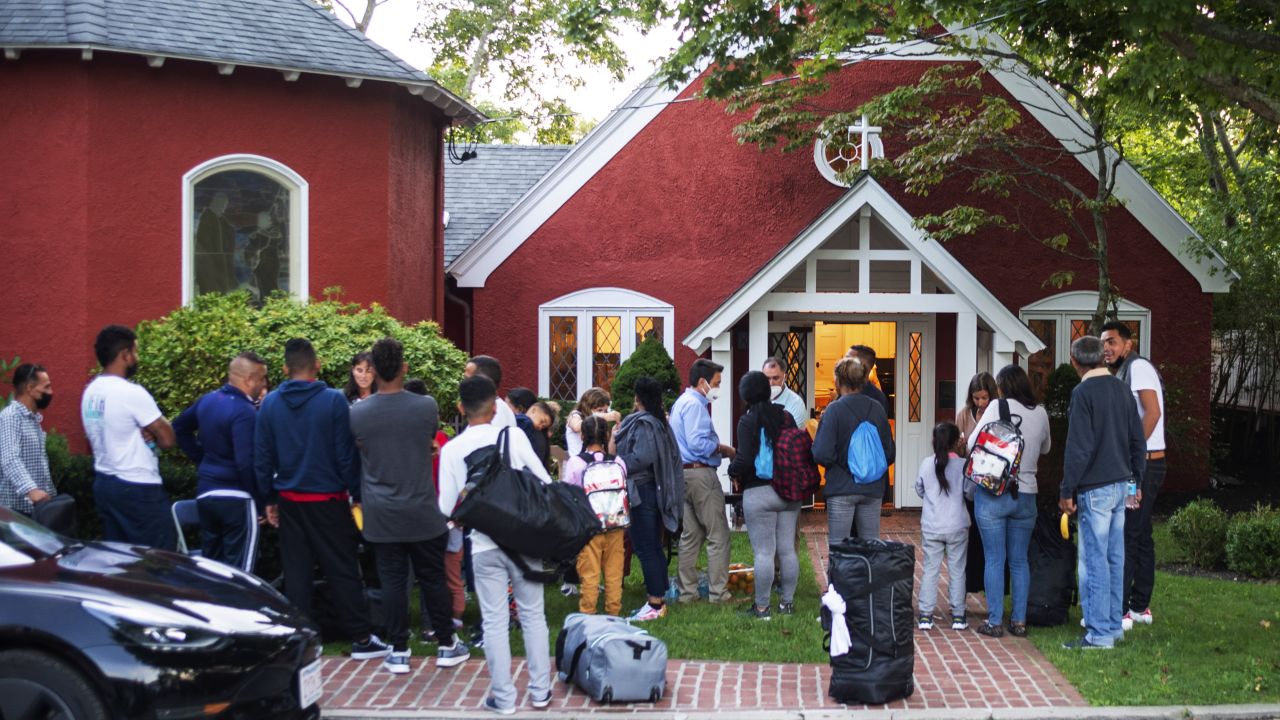 Florida Gov. Ron DeSantis faces multiple lawsuits and a criminal investigation for his role in flying a group of 48 Venezuelan and Colombian migrants from Texas to Martha’s Vineyard, Massachusetts, on Sept. 14. DeSantis’ office called the action “a relocation program to transport illegal immigrants to sanctuary destinations.”

The individuals in question were reportedly lured from the Migrant Resource Center in San Antonio, Texas, with false promises of jobs and education awaiting them in Boston. Instead, they were flown to Florida. And then, with no warning to local authorities or residents, they were finally taken to Martha’s Vineyard, an island off the Massachusetts coast, home to wealthy CEOs and celebrities and a popular destination for vacationing presidents.

If DeSantis was making a political point to Democrats about the burden that migrants place on state governments at the southern border, his actions appear to have backfired. Within hours of the migrants’ arrival, Martha’s Vineyard residents and community activists mobilized to provide food, clothing, and shelter at a church for the new arrivals, CNN reports. Local and national fundraising efforts resulted in more than $175,000 in donations. Migrants were each given a mobile phone and a $50 prepaid debit card, then were transported to Joint Base Cape Cod, where they are currently being housed while lawyers help them seek asylum.

Javier Salazar, the sheriff of Bexar County, Texas, has announced a criminal investigation into those who “lured and transported” the migrants from his county to Massachusetts.

Some of the migrants have also filed a federal class action lawsuit with the help of Boston-based Lawyers for Civil Rights.

One attorney with the organization, Mirian Albert, was among those who rushed to help the migrants and offered them legal aid. She spoke with YES! Racial Justice Editor Sonali Kolhatkar about what she witnessed.

Sonali Kolhatkar: Let’s start with what it was like to be with this group of migrants. You had the chance to be with them in person and interact with them. Give me a sense of where they’ve come from and what their journey has been like.

Mirian Albert: Sure. My office, Lawyers for Civil Rights, myself included, have been on the ground since the group of migrants arrived at Martha’s Vineyard. And then our offices also helped with escorting them from Martha’s Vineyard to Joint Base in Cape Cod, where they’re currently housed.

And from what I saw, it was really tragic. I heard stories from folks there who had discussed traveling for months on end from various countries, going through perilous different routes where some people were kidnapped, experienced violence on the way to the United States, and who were also fleeing violence, sometimes from their own home countries.

So, this group of folks was just hoping to seek refuge and safety in the United States, and it’s so shameful that they were being used as political pawns to make a point.

Kolhatkar: I understand that many of them are from Venezuela, so they have made a long journey. And they turned themselves in at the border, which, from my layperson’s perspective, gives them legal rights in this country, right?

Albert: So yeah, the majority of the group was from Venezuela. It was a variety of populations. There were women, there were children as young as 2 years old, there were teenagers of various ages.

So, that is kind of the point that Lawyers for Civil Rights is making, that it seems that there is an interference with federal immigration law by moving these individuals from Texas, where they were, and putting them on an isolated location, now off the coast of Massachusetts.

Kolhatkar: And Florida spent lots of money to charter these planes from Texas, right? Do you see this as a political stunt?

Albert: It is, I agree. I mean, it’s shameful, and especially in the manner that it happened here, where, for example, folks were talking about how they were induced to get on this plane, being made promises to find employment, to secure permanent housing, to obtain assistance with food, with clothing. People were promised English classes, resources for their children who would be attending school.

And I think most alarming [was] that they were told that they would have assistance with their legal proceedings moving forward. But none of these things were actually arranged. None of this was actually implemented.

When they arrived at Martha’s Vineyard, if it hadn’t been for the effort from the community who mobilized immediately, these folks would not have had anything at all. They were left with no help at all.

Kolhatkar: Tell me how people mobilized on the ground. I imagine that the migrants themselves were surprised, because they were told one thing and found another. And also, the people in Martha’s Vineyard were surprised to receive them, right?

And then also landing and not having anyone to help them. So that was another shock as well.

But thankfully, I think that [the migrants] have been really grateful [for] the warm response [from] the community. Churches and other community organizations have really mobilized to ensure that they were able to provide immediate needs.

We’ve also seen an outpouring of support from the legal community in that we’ve seen numerous pro bono attorneys along with Lawyers for Civil Rights who have showed up at Martha’s Vineyard, and we’ve all continued to move efforts forward to ensure that all of these individuals have individual immigration representation moving forward.

Albert: Yeah, definitely. I mean folks talked about how they felt tricked. They felt defrauded, they were disoriented. I spoke to a mother who was there with her younger son, and she talked about how she felt regret. She was like, “We flew here, I believed this person who told me to get on this flight, with all of these things promised, and now we’ve landed in a location that I can’t find anyone to help us.” [She was] thinking of her child and the implication that it might have on the longer term.

Thankfully, the community really responded in such a positive way, and they were able to obviously get help, but I think that a lot of people were really disturbed by the whole situation and still can’t believe that all the promises that they were made were all fake, all false.

Kolhatkar: Can you share with us any stories of individuals—while obviously protecting their identity—any details that you can give us about their lives, what led them to the United States, what they’re looking for, what their hopes and dreams might be for their future?

Albert: Yeah, I mean it’s really a variety of stories, right? We had a few families and mothers who were there with their young children. We had fathers there who want to make sure that they’re able to give their children back in their home countries a better life and are very much concerned about what implications this whole situation will have on their ability to stay in the United States. So, there are a variety of stories, definitely.

Kolhatkar: Martha’s Vineyard is a privileged community. It’s also a liberal enclave. It’s a place where presidents vacation. Yet the response was warm. Can you give me a sense of the kind of grassroots connections that were formed?

Albert: The community response was inspiring. It truly was. They were able to place all of the folks inside of a church. They were able to provide food, clothing by donation. They were also able to connect them with medical assistance, dentist appointments, you know, get them whatever immediate medical needs that they had at the moment. And that was extremely crucial.

Kolhatkar: What has happened to the migrants now? Tell me about where they have ended up and what their future holds for them.

Albert: Sure. Lawyers for Civil Rights, in collaboration with local officials, assisted in relocating the migrants from Martha’s Vineyard to Joint Base, where they’re currently housed. And that was just so that there was appropriate housing or space for everyone that wasn’t available at the church previously, in addition to providing whatever additional resources they needed. Our efforts to connect them with immigration attorneys also continue. So that’s been ongoing.

Kolhatkar: I understand that your organization is asking for a criminal investigation into what Gov. Ron DeSantis of Florida did?

Albert: Correct. Yes, Lawyers for Civil Rights sent out a letter calling for federal and state officials to open a criminal investigation surrounding [DeSantis’ actions], whether it be around kidnapping and trafficking and additional criminal implications that may come from this situation. In addition to that, on a parallel track, Lawyers for Civil Rights is working on exploring any other potential and viable civil implications, because we do believe that there are some constitutional claims that are viable and that should be asserted.

Kolhatkar: What needs to happen in the broad scheme of things? Because the GOP is claiming that there aren’t enough resources for southern states like Florida and Texas to deal with the “crush at the border.” But it seems as though Republicans don’t admit that they are unwilling to legislate solutions to the immigration crisis, right?

Albert: All right. I think that the important thing here is that this doesn’t happen again, right? You can’t just induce people to board a plane and then send them to a different location without having any preparations for them.

And that’s what Lawyers for Civil Rights wants to make sure of: that the parties that were responsible for this occurring here at Martha’s Vineyard, that that doesn’t repeat itself again, and that these responsible parties are held accountable, because, you know, we’re not going to allow this to happen again.

Sonali Kolhatkar is currently the racial justice editor at YES! Media and a writing fellow with Independent Media Institute. She was previously a weekly columnist for Truthdig.com. She is also the host and creator of Rising Up with Sonali, a nationally syndicated television and radio program airing on Free Speech TV and dozens of independent and community radio stations.