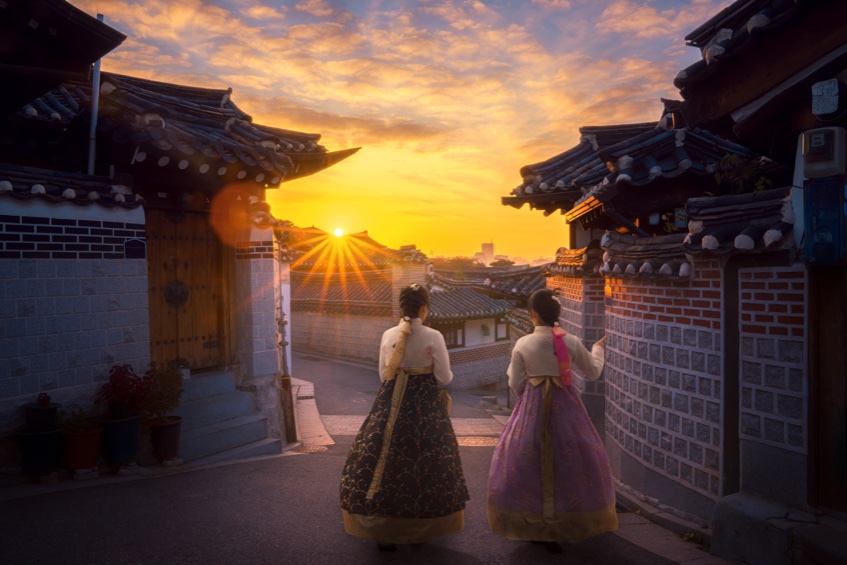 At the heart of the Korean spirit is a concept called “Han.” It is central to Korean-ness in the same way “aloha” is to Hawaiian-ness. Oddly, however, it is rarely mentioned in conversation or in the media. Its English translation is nonexistent. But I will try to describe it, because Han is the resilience of my ancestors, who have endured the unendurable for the past 9,000 years. There may be clues here on how we in the U.S. may also carry on, as we witness, stunned, our political and ecological systems in collapse.

Defining Han is indeed elusive. Han has been a function of collective suffering over the course of multiple millennia. However, the term wasn’t popularized until the 20th century, when Korea was triply cursed with Japanese occupation, the still-unresolved Korean War, and a peninsula riven in two. I define Han as “irreparable sorrow.” Others have called it “a mixture of sorrow and resentment, but with tinges of hope within the sadness and anger.” A more accurate definition might be achieved by describing how Han expresses itself—through storytelling, song, poetry, prayer. It is the language of humanity. Han is the flesh adhering to ancestral bones.

My hope is that Han might comfort the pit recently left in many stomachs after the sweeping series of unhinged rulings by the Supreme Court that included overturning Roe v. Wade in the face of broad public disapproval, expanding gun freedoms, and stripping the EPA of powers to regulate carbon emissions—all in the course of one week. Han is always with me, tucked away like Tiger Balm, drawn out only for special times. Now is one of those times.

It is the language of humanity. Han is the flesh adhering to ancestral bones.

It is high time for the United States—a country not yet 250 years old—to do some serious soul-searching. We can no longer cling to the preposterous belief that the Supreme Court is the one branch of government that is incorruptible. It has become apparent that the callously partisan court is just another loose leg on a wobbly three-legged stool.

Meanwhile, we the people are still fighting the very same struggles we have been for decades—for abortion rights, gun control, demilitarization, and saving the environment—now against the astonishing and unprecedented backdrop of climate catastrophe. How are we to cope?

The answer can perhaps be found in Han, which holds wisdom absent from popular American culture that has always spoon-fed us Hollywood’s happy endings. In the movies, we would just kill the bad guys—problem solved! Or, as popular mythos would dictate, we would just wake up one day from this nightmare and the world would be on track again. But it isn’t just a bad dream. A livable planet—let alone a tolerable United States—is on the line. This is our reality.

So, what exactly is Han? Suh Nam-Dong, one of the founders of Korean minjung liberation theology, described Han as “a feeling of unresolved resentment against injustices suffered, a sense of helplessness because of the overwhelming odds against one, a feeling of acute pain in one’s guts and bowels, making the whole body writhe and squirm, and an obstinate urge to take revenge and to right the wrong—all these combined.”

What is omitted from such definitions, though, is the very quality that makes Han transcendent; that is, the poeticization of these profound feelings of grief and loss—what philosopher Cornel West has called “blues sensibility” when describing the work of Billie Holiday or Tennessee Williams. Poeticization communalizes experience. It gives us a common song. That is why the African American tradition of blues serves as a great model for resilience—joy, even—in the face of unimaginable adversity.

After all, what is solidarity, if not fellowship made political?

The Korean folk-music tradition of pansori has often been compared to the American blues tradition. Pansori is an almost pure embodiment of Han, with its soaring peals of joy that quickly drop to guttural groans. Therein lies the cathartic transcendence: in a kind of sobbing, howling, moaning fellowship that makes poetic the otherwise unbearable. Like the blues, it is all the sorrows of the world experienced in communion with others.

Communion and fellowship are what will get us through, no matter what the bastards do. Solidarity, as it were. After all, what is solidarity, if not fellowship made political?

Perhaps the arc of the moral universe bends not toward justice, but toward solidarity. If we can bear these injustices together, we can work together to seek justice.

Through the lens of Han, I contemplate the Supreme Court decisions. In a way, those rulings are only data points against a national tableau of grotesque suffering—the endless battery of mass shootings, the hail of police gunfire that landed 60 bullets in the body of Jayland Walker, the outpouring of weapons for war in Europe, ominous brinkmanship toward China, London afire in 40 degree Celsius heat while the latest Intergovernmental Panel on Climate Change (IPCC) report indicates that by 2040, the world will exceed the 1.5 degree Celsius threshold to climate cataclysm.

As I ponder these tipping points, I think of my father, Sam Soung-kuk Paik, who had intimate experience with atrocity.

Whether we win or lose, our stories become part of us, connect us to our forebears, and also to each other.

He would describe to me how Japanese occupation banned Koreans from the best jobs, leaving his uncle’s family to beg and sell opium. His voice would drop to a low vibrato. “They suffered,” he would say. Or he would describe the humiliation of diving for and fighting with other famished boys over a half-eaten tin of meat tossed out of an American army jeep. He would utter again, in the same tremolo, “We suffered.” I would be hypnotized as my father’s voice and body would morph into Han, pansori-style, becoming a prayer for the sufferers, and then, somehow, becoming a part of me.

I also think of my Quaker grandmother, Elinor Ashkenazy, who helped organize the peace boat, the Golden Rule, in the 1950s. The tiny ketch first set sail across the Pacific in 1958 with the intention of stopping the U.S. from dropping atomic bombs on the Marshall Islands. Its story was another kind of prayer, another kind of poetry—and the inspiration for the founding of Greenpeace and many other peace projects. Today, Veterans for Peace has restored the Golden Rule, and is now sailing the world. In the fall of 2022, it will ply the Mississippi with a message of peace and demilitarization.

I also think of my husband, Jerry Mander, now in his 80s, who, in 1971, founded Public Interest Communications, one of the first nonprofit messaging agencies. Through beautifully written full-page advocacy ads in The New York Times, he shined a light on the issues of the day—issues with which we still contend today: gun control, a woman’s right to choose, desecration of the Earth, and others.

Jerry’s agency was the first to broadly publish clarion calls for Sierra Club, Planned Parenthood, Greenpeace, and other seminal activist groups. A collection of Jerry’s most notable advertisements spanning a lifetime is featured in his forthcoming book, 70 Ads to Save the World: An Illustrated Memoir of Social Change. To see the diversity of ads together as a unified oeuvre, it becomes apparent how vibrant the intersectionality of the movements were back in the day, even before we had the word “intersectionality.”

Each of the book’s ads are accompanied by personal stories that give meaning and context to particular campaigns. Though the goal of the ads was always to significantly influence policy, not all were successful. No matter. The true value, it turned out, was in the solidarity built by doing the early work, especially in the face of insurmountable odds.

Whether we win or lose, our stories become part of us, connect us to our forebears, and also to each other. They are our foundation, and in a certain sense, this is the ultimate lesson of activism. Our shared humanity. The stories of those who have spoken truth to power throughout history are lodestones that give direction to the justice-minded who follow.

The esteemed author and elder Alice Walker has elegantly stated (as per the title of one of her books), “The way forward is with a broken heart.” But I favor this earthy interpretation of Walker’s sagesse from poet and human-rights lawyer Julian Aguon: “The only thing that is keeping my shit together is being in community with people on the ground.” His blunt take is the ultimate lesson of Han. Whatever else happens, they can’t take away our solidarity. Radical love is revolutionary, even when there is no path to obvious victory. That’s how we keep on keepin’ on. That’s how a culture can last 9,000 years.

Koohan Paik-Mander serves on the boards of World BEYOND War and the Global Network Against Weapons and Nuclear Power in Space. She is also on the advisory committee of the Global Just Transition project at Foreign Policy in Focus and part of the CODEPINK working group “China is Not Our Enemy.” She formerly served as campaign director of the Asia-Pacific program at the International Forum on Globalization. She is co-author of The Superferry Chronicles: Hawaii’s Uprising Against Militarism, Commercialism and the Desecration of the Earth.