How To Decrease Your Risk For Dementia By 90 Percent

Staying fit is key to warding off many chronic diseases in later life, including those that may affect your brain. Worldwide, 47 million people are living with dementia. This is expected to increase to 75 million by 2030 and more than triple by 2050, according to the World Health Organization (WHO).1 Yet, you may be able to significantly slash your risk by taking steps to improve and maintain your cardiovascular fitness.

In fact, researchers from the University of Gothenburg in Sweden revealed that women with the highest cardiovascular fitness had an 88 percent lower risk of dementia than those with moderate fitness.2 Further, even maintaining average fitness is worthwhile, as women with the lowest fitness had a 41 percent greater risk of dementia than those of average fitness. Fitness, in this case, is not the same as exercise, and the study did not measure how often the women exercised.

Instead, it focused on cardiovascular fitness, as measured by a stepwise-increased maximal ergometer cycling test. Cardiovascular fitness can be a measure of how well blood is circulating to your heart and brain. Study author and physiotherapist Helena Horder told Time, “If the small blood vessels and circulation in the heart are OK, then the brain is also affected in a positive way by good small vessel circulation.”3

During the cycling test, women continued cycling as additional weight or resistance was added. When they became exhausted to the point that they couldn’t continue, or the test had to be stopped due to changes seen on an electrocardiograph or in their blood pressure, that was considered to be their peak workload.

Overall, out of the 191 women in the test, 23 percent developed dementia during the 44-year study period. However, among those whose cycling test was interrupted before reaching peak workload, the percentage with dementia rose to 45 percent. “Many of those who interrupted the test at submax, very low watt level, probably had indications for a poor cardiovascular health status,” Horder told CNN.

“This might indicate that processes in the cardiovascular system might be ongoing many decades before onset of dementia diagnosis.”4 Further, past research has revealed that exercise prevents age-related shrinkage of your brain, preserving both gray and white matter in your frontal, temporal and parietal cortexes, thereby preventing cognitive deterioration. The authors stated that:5

“These results suggest that cardiovascular fitness is associated with the sparing of brain tissue in aging humans. Furthermore, these results suggest a strong biological basis for the role of aerobic fitness in maintaining and enhancing central nervous system health and cognitive functioning in older adults.”

Similar findings have been found by other scientists. For example, one observational study that followed more than 600 seniors starting at age 70 found that those who engaged in the most physical exercise showed the least amount of brain shrinkage over a follow-up period of three years.6

Another way that cardiovascular fitness may slash dementia risk is that exercise (which helps improve cardiovascular fitness) increases levels of the protein PGC-1alpha, which is responsible for improving mitochondrial biogenesis. Research has shown that people with Alzheimer’s have less PGC-1alpha in their brains and cells that contain more of the protein produce less of the toxic amyloid protein associated with Alzheimer’s.7

Even among those at high risk of dementia, cognitive decline can be reduced with a comprehensive program addressing diet, exercise, brain training and managing metabolic and vascular risk factors.8 Exercise initially stimulates the production of a protein called FNDC5, which in turn triggers the production of BDNF, or brain-derived neurotrophic factor. In your brain, BDNF not only preserves existing brain cells,9 it also activates brain stem cells to convert into new neurons and effectively makes your brain grow.

Research confirming this includes a study in which seniors aged 60 to 80 who walked 30 to 45 minutes, three days per week, for one year increased the volume of their hippocampus by 2 percent.10 The hippocampus is a region of your brain important for memory. Higher fitness levels were also associated with a larger prefrontal cortex.

In another study, patients diagnosed with mild to moderate Alzheimer’s, the most common form of dementia, who participated in a four-month-long supervised exercise program had significantly fewer neuropsychiatric symptoms associated with the disease than the control group that did not exercise.11

Another study published in PLOS One revealed that a progressive walking program that led to participants briskly walking for at least 150 minutes each week was associated with improvements in functional ability in people with early Alzheimer’s disease.12 Among some of the participants, the walking program also led to improvements in cardiorespiratory fitness, and this was in turn associated with improved memory performance and even increases in the size of their brain’s hippocampus.13

It’s previously been suggested that exercise can also trigger a change in the way amyloid precursor protein is metabolized, thus slowing down the onset and progression of Alzheimer’s. It’s important to realize, however, that while exercise can be viewed as a “drug” of sorts to lower your risk of dementia and chronic disease, it’s possible to overdo it, which can make your health worse instead of better.

More is not always better when it comes to exercise. Particularly in the case of high-intensity interval training, very short workouts done just two or three times a week is all it takes to reap the benefits.

How To Improve Your Cardiovascular Fitness

High-intensity interval training (HIIT) is an important component of reaching high levels of fitness, and it requires only a fraction of the time compared to typical moderate or low-intensity gym workouts. For example:

One of the simplest HIIT workouts is the Nitric Oxide Dump workout, developed by Dr. Zach Bush, which is particularly beneficial because, by stimulating the release of nitric oxide (NO), it also improves your immune function and stimulates the thinning of your blood and decreases its viscosity, which in turn decreases platelet aggregation. The latter may discourage the development of blood clots that may cause a heart attack or stroke.

As you age, your NO production decreases, so doing this quick, simple workout is one way to fight back against the hands of time. I typically do a modified version of the Nitric Oxide Dump workout developed by Bush, which you can view in the video above. Your regular workouts should also incorporate strength training, which has also been shown to have a strong impact on brain function and memory.19

Improving Your Mitochondrial Function Is Key To Preventing Dementia

A ketogenic diet calls for minimizing carbohydrates and replacing them with healthy fats and adequate amounts of high-quality protein. I recommend a cyclical or targeted ketogenic diet for everyone, where you increase net carbs and protein once you are able to burn fat for fuel on the two to three days a week you are strength training.

I believe this is healthy for most individuals, whether they have a chronic health problem or not, as it will help you optimize your health by converting from burning carbohydrates for energy to burning fat as your primary source of fuel. You can learn more about this approach to improving your mitochondrial function, which is at the heart of Alzheimer’s disease, in my book, “Fat for Fuel.” Adopting the ketogenic diet along with intermittent fasting may further boost your results.

Alzheimer’s research suggests preclinical signs of Alzheimer’s disease may be evident as early as 20 years before the disease actually sets in, allowing for much earlier intervention if these changes are identified.20 However, normally by the time your memory begins to noticeably deteriorate, about 40 to 50 percent of your brain cells have already been damaged or destroyed.

Dr. Dale Bredesen, director of neurodegenerative disease research at the University of California, Los Angeles (UCLA) School of Medicine, and author of “The End of Alzheimer’s: The First Program to Prevent and Reverse Cognitive Decline,” recommends the following Alzheimer’s screening test so you can evaluate your risk and then get on an appropriate program for prevention or, if you’re already symptomatic, reversal: 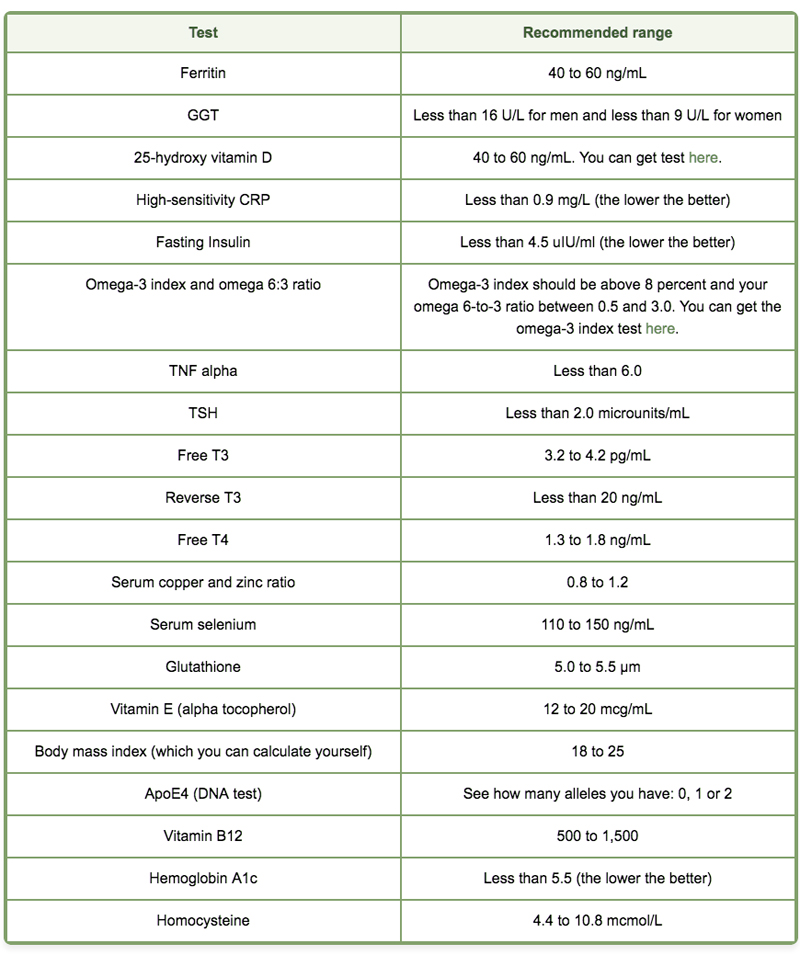 While it’s often believed that dementia is a condition that can’t be controlled, there are many factors you can influence that will greatly affect your risk. Improving your cardiovascular fitness is an excellent place to start — with the potential to cut your risk by up to 90 percent, as the featured study found — and when combined with other approaches to resolve mitochondrial dysfunction can be highly effective in preventing cognitive decline.