How to Raise Climate-Resilient Kids

In the face of climate change, children need positive stress as well as compassion to maintain mental health and inform their responses. 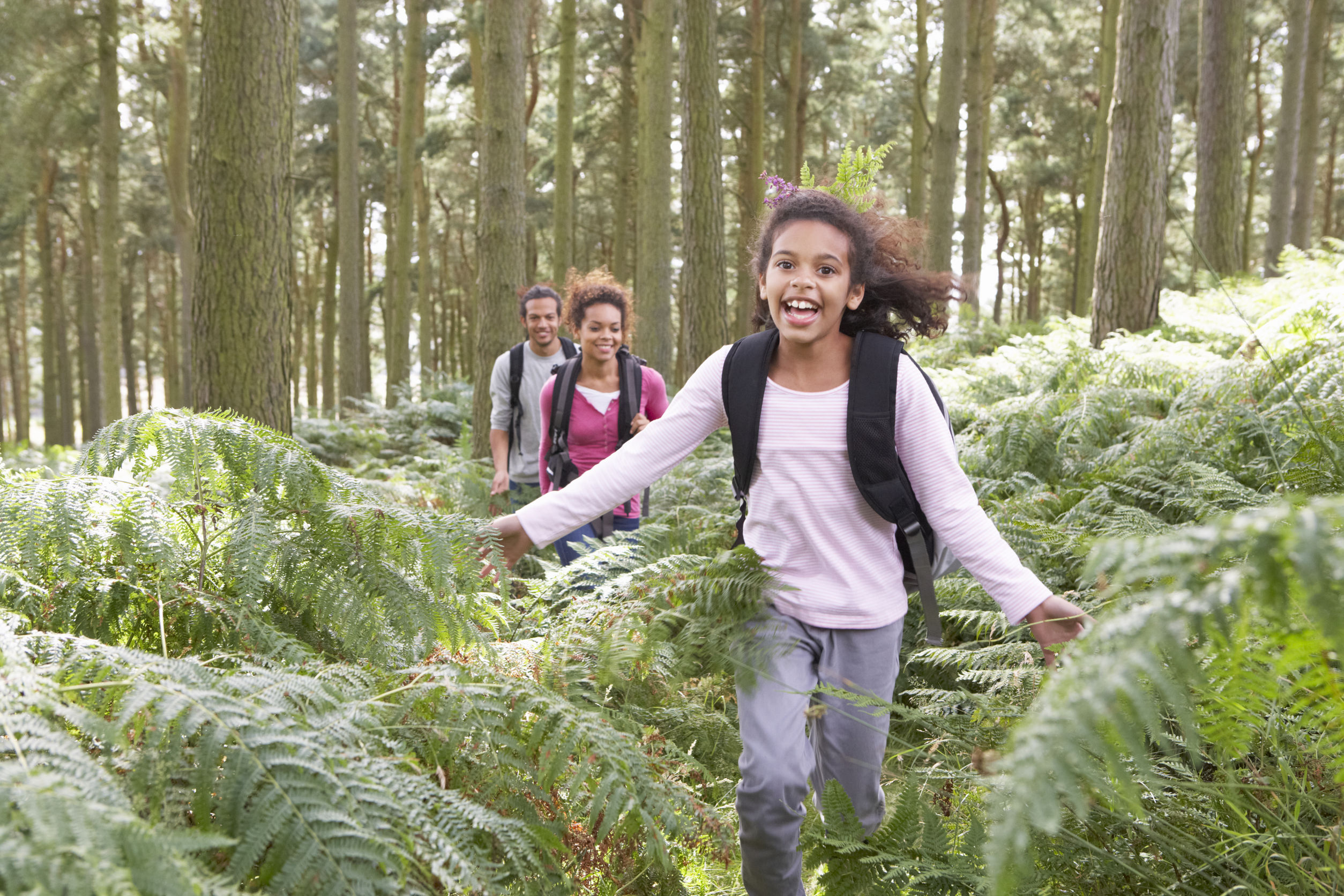 Climate-related disasters are on the rise, and carbon emissions are soaring. Parents today face the unprecedented challenge of raising children somehow prepared for a planetary emergency that may last their lifetimes. Few guidebooks are on the shelves for this one, yet, but experts do have advice. And in a bit of happy news, it includes strategies already widely recognized as good for kids.

First, consider that a child born today enters a world growing progressively hotter, where recent weather extremes have displaced tens of millions of people. Scientists say displacement may swell into the hundreds of millions in the years ahead, as the rapid melting of glaciers now underway drives sea levels upward. The resulting migrations will likely trigger conflict, hunger, and political instability. As we already see in the children pressed against the U.S.-Mexico border, many of them fleeing drought in Central America, migrations may also lead to hardened borders and xenophobic or racist impulses. All this causes military analysts to call climate change a “threat multiplier” that can exacerbate existing social problems.

Parents today must brace kids for both the direct physical impacts of climate change and the humanitarian crises they will trigger, which may be worsened by human behaviors. Whether kids experience the events personally or in the context of world news, experts say kids will need strong foundations in resilience, positive thinking, compassion, and other skills to maintain mental health and inform their responses.

“I hear about it every week now,” she says from her office in Anchorage. “Parents are worried about existential stuff, like clean water, a livable planet for their kids, even catastrophic environmental events.”

Wiese says parents can use a range of strategies to help children, but that kids first require a supportive relationship with one or more caregivers.

“That connection is vital for helping children develop skills such as resilience,” she says.

Wiese defines resilience as the ability to manage stress and adapt to change. Her words are backed by a 2017 American Psychological Association report on the mental health impacts of climate change, which also emphasizes strong caregiver support and the value of resilience. For parents, the report’s authors recommend cultivating belief in a child’s own resilience, fostering optimism, and teaching children to control emotional responses to change. These are common tenets of modern parenting the report says are made especially important by climate change.

Psychologists also describe the value of “positive stress,” which may include public speaking, making new friends, and other experiences that can briefly increase heart rates but that help wire young minds to adapt to change. Parents who provide supportive coaching through these normal life experiences help kids develop resilience.

Like many things, what happens earliest in life matters most, but teens and even adults can still improve resilience. The APA offers an online guide with age-appropriate strategies for parents.

In contrast, stress related to poverty, malnutrition, violence, or abuse can weaken a child’s resilience, acting as “threat multipliers” of their own for children born into the climate change era. In such cases, climate can compound existing stress, potentially increasing odds for substance abuse, anxiety, or depression, according to the authors of the APA report.

Especially where caregiver support is lacking, coaches, teachers, and other mentors can help young people manage these negative stressors. It’s a reminder that entire communities, not just parents, will have a hand in raising climate-resilient children.

That community focus is an important factor according to Susan Clayton, a psychologist at Wooster College in Ohio and co-editor of Psychology and Climate Change: Human Perceptions, Impacts, and Responses, which summarizes psychological research tied to climate change.

“Strong social support networks give children a better foundation in resilience,” Clayton says. She lists teachers, clubs, and faith communities as good examples of social networks that become “sources of meaning” for kids.

Connection to the Outdoors

Connecting youths to the outdoors is also important when it comes to climate change. Research shows time outdoors, especially at an early age, can reduce childhood stress and anxiety, while strengthening confidence, imagination, and physical health—all characteristics that will help tomorrow’s adults adapt to a changing world.

“Nature-based education [and] therapy are real sources of strength and resilience for young people,” Clayton says.

But not everyone grows up with access to the outdoors, and both climate change and population growth are driving greater movement to urban areas worldwide. It means more kids live in developed areas with limited time in nature.

Nature-based education is good for older kids, too, and can spark interest in science and other fields that will be crucial in the decades ahead.

Fortunately, concern over how much time kids spend hitched to phones and computers has already sparked a revival in nature-based education. Parents and teachers today can access a growing network of tested programs. Some, such as Project Learning Tree and the National Environmental Education Foundation, are active across the country, but an expanding galaxy of others function at the local level. At the movement’s cutting edge is a growing number of outdoor-focused preschools and kindergartens that provide formative experiences in natural settings, including within urban areas.

Proponents say nature-based education is good for older kids, too, and can spark interest in science and other fields that will be crucial in the decades ahead, as people engineer solutions to climate-related challenges. Such programs may steer teens toward promising careers. But in the short term, learning about science and nature can instill optimism in the face of discouraging climate news.

But what about day-to-day actions in the home? Experts agree that discussing climate change and modeling behaviors that reflect climate solutions are important, too. Discussions need to be age-appropriate to protect young children from unnecessary stress and anxiety. But exhibiting climate-positive behaviors such as energy conservation and avoiding single-use plastics carries value at all ages. According to Wiese, it shows kids that parents are engaged in trying to better the world, and it fosters resilience by channeling energy toward tangible action.

Mary DeMocker, author of The Parents’ Guide to Climate Revolution, agrees. As the mother of two young adults, DeMocker spent more than two decades raising kids with climate change in mind, and she believes in empowering young people to create solutions.

“Anything that gives kids a sense of agency is important,” she says. “Maybe they help put together the family’s emergency plan or evacuation kit. For older kids, it might mean writing letters to Congress.”

Teaching kids to think critically about the issue helps them avoid despair and instead empowers them to create change.

DeMocker’s book contains 100 short, action-oriented chapters with ideas on greener lifestyles, getting kids outdoors, and promoting solutions to the climate crisis. She is attentive to the science of climate change and the urgent need for a swift transition to clean energy. That drives her belief that children growing up today must feel empowered to create change. In addition to strong support networks, time outdoors, and positive thinking habits, she says, empowerment comes from solid foundations in both civics and climate science.

“I encourage parents to push for climate literacy in schools,” she says. “Climate change is the biggest thing that’s going to affect their children’s future. Kids need to know the science and causes but also the solutions. And it needs to be taught free from the constraints of political interests.”

DeMocker says young people should not be told “what to think about climate, but how to think about it.” She believes teaching kids to think critically about the issue, including in geopolitical terms, helps them avoid despair and instead empowers them to create change. A grounding in civics and democracy then informs kids how change can occur.

Compassion is also a theme in DeMocker’s work. She says it’s an important emotional response for parents to exercise while listening to a child’s fears about climate change, which may include concerns about wildlife, natural disasters, or the well-being of friends, family, and even pets.

In Alaska, Wiese also sees the importance of compassion. She says parents foster compassion when they provide a safe emotional place for kids to express their feelings and where feelings are respected. For younger children, she also sees value in compassion-based play.

Exercising compassion models behaviors young people will need in the future, too, as they emerge as adults into a world undergoing significant physical and societal change. Global experts predict low- and middle-income people—and especially children—will continue feeling the brunt of weather extremes, food shortages, and other climate-related events. Tomorrow’s adults will need to know the value of compassion to promote responses that alleviate suffering, foster social justice, and decarbonize the economy. That provides a check against intolerance, nationalism, and other negative reactions that can compound suffering and civil unrest. Practicing compassion also carries mental health benefits that can help tomorrow’s adults weather the climate disruption they will experience.

Like climate change itself, the prospect of raising children on a warming planet is daunting. When it becomes overwhelming, Wiese says, parents should focus on what they can control: Practice self-care. Provide kids with safety and support. Teach resilience and compassion. And model planet-healthy choices that orient children away from anxiety and toward solutions.

TIM LYDON has worked on public lands issues for many years and is a founding member of the Prince William Sound Stewardship Foundation. His writing has appeared in Hakai Magazine, The Revelator, The Hill, Terrain.org, and elsewhere.