Do you find yourself thrashing against the tide of human indifference and selfishness? Are you oppressed by the sense that while you care, others don’t? That because of humankind’s callousness, civilisation and the rest of life on earth are basically stuffed? If so, you are not alone. But neither are you right.

A study by the Common Cause Foundation, due to be published next month, reveals two transformative findings. The first is that a large majority of the 1000 people they surveyed – 74% – identify more strongly with unselfish values than with selfish values. This means that they are more interested in helpfulness, honesty, forgiveness and justice than in money, fame, status and power. The second is that a similar majority – 78% – believes others to be more selfish than they really are. In other words, we have made a terrible mistake about other people’s minds.

The revelation that humanity’s dominant characteristic is, er, humanity will come as no surprise to those who have followed recent developments in behavioural and social sciences. People, these findings suggest, are basically and inherently nice.

A review article in the journal Frontiers in Psychology points out that our behaviour towards unrelated members of our species is “spectacularly unusual when compared to other animals”. While chimpanzees might share food with members of their own group, though usually only after being plagued by aggressive begging, they tend to react violently towards strangers. Chimpanzees, the authors note, behave more like the Homo economicus of neoliberal mythology than people do.

Humans, by contrast, are ultra-social: possessed of an enhanced capacity for empathy, an unparalleled sensitivity to the needs of others, a unique level of concern about their welfare and an ability to create moral norms that generalise and enforce these tendencies.

Such traits emerge so early in our lives that they appear to be innate. In other words, it seems that we have evolved to be this way. By the age of 14 months, children begin to help each other, for example by handing over objects another child can’t reach. By the time they are two, they start sharing things they value. By the age of three, they start to protest against other people’s violation of moral norms. 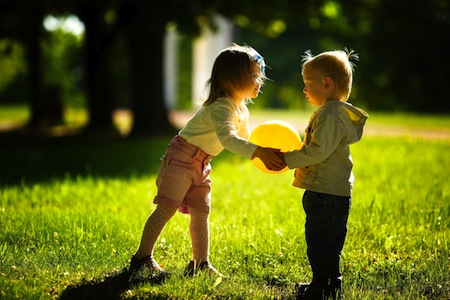 A fascinating paper in the journal Infancy reveals that reward has nothing to do with it. Three to five-year-olds are less likely to help someone a second time if they have been rewarded for doing it the first time. In other words, extrinsic rewards appear to undermine the intrinsic desire to help. (Parents, economists and government ministers, please note). The study also discovered that children of this age are more inclined to help people if they perceive them to be suffering, and that they want to see someone helped whether or not they do it themselves. This suggests that they are motivated by a genuine concern for other people’s welfare, rather than by a desire to look good. And it seems to be baked in.

Why? How would the hard logic of evolution produce such outcomes? This is the subject of heated debate. One school of thought contends that altruism is a logical response to living in small groups of closely related people, and evolution has failed to catch up with the fact that we now live in large groups, mostly composed of strangers. Another argues that large groups containing high numbers of altruists will outcompete large groups which contain high numbers of selfish people. A third hypothesis insists that a tendency towards collaboration enhances your own survival, regardless of the group in which you might find yourself. Whatever the mechanism might be, the outcome should be a cause of celebration.

So why do we retain such a dim view of human nature? Partly, perhaps, for historical reasons. Philosophers from Hobbes to Rousseau, Malthus to Schopenhauer, whose understanding of human evolution was limited to the Book of Genesis, produced persuasive, influential and catastrophically mistaken accounts of “the state of nature” (our innate, ancestral characteristics). Their speculations on this subject should long ago have been parked on a high shelf marked “historical curiosities”. But somehow they still seem to exert a grip on our minds.

Another problem is that – almost by definition – many of those who dominate public life have a peculiar fixation on fame, money and power. Their extreme self-centredness places them in a small minority, but, because we see them everywhere, we assume that they are representative of humanity.

The media worships wealth and power, and sometimes launches furious attacks on people who behave altruistically. In the Daily Mail last month, Richard Littlejohn described Yvette Cooper’s decision to open her home to refugees as proof that “noisy emoting has replaced quiet intelligence” (quiet intelligence being one of his defining qualities). “It’s all about political opportunism and humanitarian posturing,” he theorised, before boasting that he doesn’t “give a damn” about the suffering of people fleeing Syria. I note with interest the platform given to people who speak and write as if they are psychopaths.

Misanthropy grants a free pass to the grasping, power-mad minority who tend to dominate our political systems.

The consequences of an undue pessimism about human nature are momentous. As the Common Cause Foundation’s survey and interviews reveal, those who have the bleakest view of humanity are the least likely to vote. What’s the point, they reason, if everyone else votes only in their own selfish interests? Interestingly, and alarmingly for people of my political persuasion, it also discovered that that liberals tend to possess a dimmer view of other people than conservatives do. Do you want to grow the electorate? Do you want progressive politics to flourish? Then spread the word that other people are broadly well-intentioned.

Misanthropy grants a free pass to the grasping, power-mad minority who tend to dominate our political systems. If only we knew how unusual they are, we might be more inclined to shun them and seek better leaders. It contributes to the real danger we confront: not a general selfishness, but a general passivity. Billions of decent people tut and shake their heads as the world burns, immobilised by the conviction that no one else cares.

You are not alone. The world is with you, even if it has not found its voice.

This article was first published on the Guardian.

George Monbiot is the author of the best selling books The Age of Consent: a manifesto for a new world order and Captive State: the corporate takeover of Britain. He writes a weekly column for the Guardian newspaper. Visit his website at www.monbiot.com.

See also:
Yes to Compassion: 12,000 Icelanders Step Up For Refugees, Shaming Their Government (and Several Others')
Teaching What Matters Most