The houses are affordable and energy-efficient, and are bringing back elements of the Secwepemc’s hunter-gatherer culture. 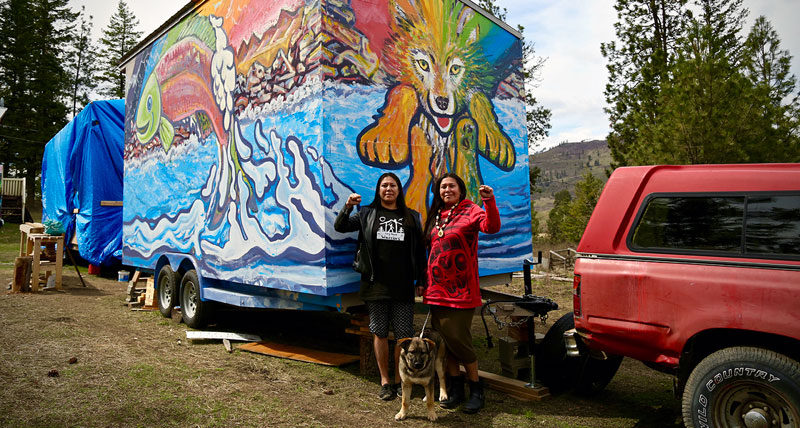 Tiny houses are a trendy way to live minimally and downsize—but for a First Nations community in British Columbia, they’re an act of resistance.

Since the fall, indigenous women of the Secwepemc Nation—calling themselves the Tiny House Warriors—have been constructing tiny houses that they plan to strategically place in the pathway of the proposed Kinder Morgan Trans Mountain pipeline expansion.

“Our women came together to specifically address how we would launch our fight against this pipeline,” said Secwepemc artist and activist Kanahus Manuel, who cofounded the Tiny House Warriors. “When we saw that we were able to build those tiny houses so fast, we came together to really develop a strategy for how we were going to fight against this Kinder Morgan pipeline coming into our land.”

These tiny homes have the potential to have a big impact for Secwepemc communities. The houses are being used as symbols of resistance, and they’re also providing something more tangible: affordable, efficient housing that could revitalize Secwepemc nomadic lifeways.

The houses are solar-powered, fitted with composting toilets and wood-burning stoves, and are completely fossil fuel- free. And they’re on wheels. According to Kanahus, the small, moveable houses are also bringing back elements of the Secwepemc’s nomadic hunter-gatherer culture.

Kanahus, her twin sister, Mayuk, and women in the Secwepemc Women Warriors Society founded the group after Kanahus returned from Standing Rock in 2016, where they participated in indigenous resistance efforts against the Dakota Access pipeline. There, a Native youth group from Portland, Oregon, constructed a tiny house for Kanahus and her children within one week.

Kanahus and the Secwepemc women were inspired, and when they returned home, just outside of Kamloops, British Columbia, they considered how to use tiny homes in their own fight.

Indigenous-led actions against the controversial pipeline have been ongoing since 2010, but cohesive actions along the pipeline route started up again in March, when tribes came together to build a traditional watch house in the pipeline’s path. If the expansion is completed, it would nearly triple the amount of oil transported through unceded indigenous territories from the Alberta tar sands to Vancouver. In recent months, there have been a wave of actions to reclaim indigenous land and protect tribes’ natural resources.

So far, the group has built three houses and are installing wood-burning stoves inside them for heating. They plan to build at least 10 homes over the next few months to be deployed along the pipeline route, where pipeline construction threatens food and medicine gathering grounds and spiritually and culturally important sites, Kanahus said.

By building tiny homes, the Tiny House Warriors aim to resist a pipeline while reasserting sovereignty over traditional lands and housing practices in the process.

The Manuel family has a deep history of fighting back against colonialism. Arthur Manuel, Mayuk and Kanahus’ father, was an international leader and vocal critic of Canada’s residential schools. He wrote several books on indigenous rights, served on the United Nations Permanent Forum on Indigenous Issues, and was active in indigenous-led resistance efforts until he passed away in January.

Their grandfather George Manuel founded the World Council of Indigenous Peoples and traveled internationally to advocate for indigenous rights. Other family members have organized against deforestation and led organic gardening efforts to revitalize Secwepemc culture and build sovereignty.

“[We are] fighting back through gardening, fighting back by learning our language,” Kanahus said. “All of the stuff we’re doing is a form of resistance and a form of decolonizing.”

Kanahus herself became a vocal environmental activist after witnessing several environmental disasters occur on Secwepemc territory in British Columbia, characterized by mountains and an inland temperate rainforest. One of the worst of these disasters was the 2014 Mount Polley mine disaster, where 350 million cubic feet of wastewater from the Imperial Metals mine leaked into Quesnal Lake. The spill contained high levels of arsenic, lead, copper, and nickel.

“No one could stop the sludge from going right into our salmon run,” Kanahus said. “Our women had to get evacuated from picking huckleberries.” So Kanahus and others went to the site to set up a sacred fire, bringing media attention with them. 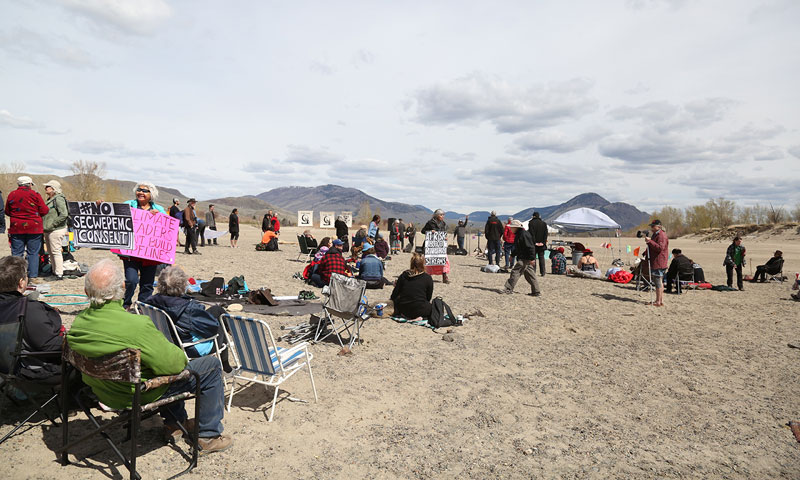 From that perspective, the Kinder Morgan pipeline is just the most recent example in a history of encroachments on the lands and rights of Secwepemc people.

Throughout the 1990s several violent standoffs occurred between indigenous people, the Canadian government, and white settlers, including the Oka Crisis in Quebec and the Gustafsen Lake Standoff on Secwepemc Territory in British Columbia. And after several years of First Nations resistance, in 2004 the provincial government allowed Sun Peaks Ski Resort to bulldoze indigenous homes, including Mayuk’s.

Mayuk had built her house outside the reserve on Secwepemc territory after a landmark 1997 case in the Canadian Supreme Court established a clearer framework for indigenous land rights. Even with this ruling, provincial governments were initially able to issue permits for mining, construction, and logging on indigenous lands. In 2014, however, a second Supreme Court decision placed stricter requirements on corporations to consult with indigenous nations before projects were approved. Still, said Kanahus, corporations have often been able to establish the appearance of indigenous consent without their agreement.

The idea to place the tiny houses on wheels was in response to the Sun Peaks Ski Resort incident.

“There are a bunch of different things that we have in our memory, our real, recent memory, of how the government bulldozed down our homes, how they got injunctions and gave us trespass and seizure notices,” Kanahus said. “We couldn’t move our homes because they were there, permanent. So, we were like, What happens if we put them on wheels and what happens if we are mobile?”

The Warriors also intend the homes to provide affordable—and safe—housing for displaced community members who need it.

“A lot of people have been living on the reserve or in urban settings because we don’t have access to our lands,” Kanahus said.

And government housing on reserves is often unhealthy and unaffordable. Kanahus said these homes are often filled with toxic chemicals like asbestos and formaldehyde and came with 50-year mortgages that were difficult to pay off. At the same time, living off the reserve is difficult because much of the Secwepemc land has already been claimed by ranchers, businesses, or towns.

Before the Secwepemc were forced to live on designated reserves, they were semi-nomadic, traveling to different parts of their territory based on the season to harvest berries, hunt, and fish. Secwepemc women were experts at setting up and taking down camp to facilitate their hunter-gatherer lifestyle, according to Kanahus.

“We were always tiny-house people. We lived in traditional underground pit houses and cedar bark lodges. It’s nothing new for us,” Manuel said. “We were always a nomadic people, we were hunter-gatherers in our nation. So, we said, Let’s go with the tiny houses, let’s go with calling it the Tiny House Warriors. It was inspired by the women in our community.”

Because the houses are on wheels, they’ve created a modernized, efficient, and fossil-fuel free revival of their nomadic lifestyle.

The Tiny House Warriors are working with Lubicon Solar, a women-led solar power initiative by members of the Lubicon Cree Nation whose territory and traditional hunting grounds have been impacted by the Alberta tar sands mining. The houses will be completely solar-powered, with heating created by wood-burning stoves and electricity from solar panels.

The sides of the houses are covered with colorful murals by Secwepemc artist and professor Jeffrey McNeil-Seymour, which illustrate aspects of Secwepemc culture and issues affecting indigenous communities. The Tiny House Warriors have also released a music album with songs by indigenous artists to support their efforts.

“A lot of this is creativity … is the art of war through media, through videos, and through images,” Kanahus said. “We want to do some different art pieces along the pipeline route.”

Each tiny house will also address a different issue affecting indigenous communities in Canada, she said.

The Warriors also hope to have a house dedicated to protecting the habitats of salmon they’ve fished for generations.

In addition, the Warriors are speaking out against proposed “man camps” that would bring in all-male construction crews to build the pipeline. These man camps, filled with workers who stay for short periods of time, lead to documented increases in violence against indigenous women.

Another issue they’re hoping to tackle is the apprehension of children from indigenous communities, Kanahus said. “We see that there’s discrimination against indigenous kids, where they are apprehended from their homes for reasons like poverty, or lack of adequate housing or food,” Jane Philpott, Canadian minister for indigenous services, told The Guardian. Recently, British Columbia passed a law that requires child services to consult with First Nations communities before taking their children.

“We want to connect those dots, because it all has to do with the displacement of our [people from our] territory,” Kanahus said about the different themes represented on the tiny-house murals.

At the moment, it’s unclear whether the pipeline will be built, but Kinder Morgan will face fierce resistance from the Tiny House Warriors at every step of the way.

“We are modern-day Indians, modern day warriors,” Kanahus said. “Consultation is not consent.”

Janice Cantieri wrote this article for YES! Magazine. Janice is a journalist who writes about Indigenous and environmental issues. As a Fulbright-National Geographic Digital Storytelling Fellow, she spent a year living in the Central Pacific island nation of Kiribati where she covered the ways communities are adapting to extreme sea level rise. She is a graduate of Medill Graduate School of Journalism at Northwestern University and is passionate about sharing stories from underrepresented communities, especially those affected by environmental issues.