Jin Shin Jyutsu: A Way To Help Ourselves

Jin Shin Jyutsu is not a healing modality, but a harmonizing art. Healing is the only known side effect. 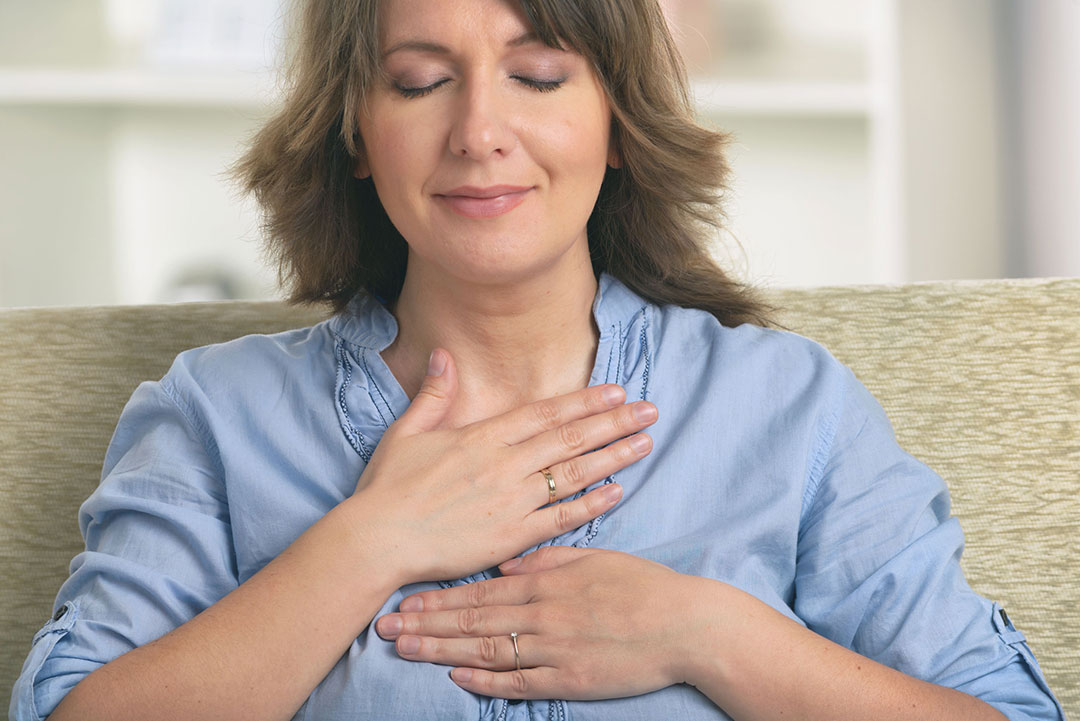 Within each of us a pulse of perfect harmony is always present, even when illness and discomfort are experienced. This underlying perfect harmony is the harmony implicit in all creation, the harmony of the bigger order of which we are a part. Different ancient philosophies allude to this inherent profound harmony in many ways; for example, they speak of being created in the image of God, divine interconnectedness, or of the Buddha within.

Jin Shin Jyutsu (pronounced jin-shin-JIT-soo) simply helps us to live this perfect expression of harmony that is innate to each of us, to be the divine blueprint. Jin Shin Jyutsu reminds us that we are not separate from nature — we are nature. Nature is always effortless. “Jin Shin Jyutsu is beautifully simplifying the complexities of existing into an art of living,” says JSJ’s first teacher in America, Mary Burmeister, in Introducing Jin Shin Jyutsu Is, Book 1.

As the art of Jin Shin Jyutsu offers a way of being, a way to know ourselves and a way to help ourselves, it can be a lifelong journey of self-knowledge and harmony. However, it can also bring profound relief where there is pain, physical discomfort and disease.

I was introduced to Jin Shin Jyutsu while I was healing from chronic illness. What most drew me to it was that it offered a toolkit for me to support myself. Having over a two-year period been simultaneously in the care of many health professionals (including neurologists, ophthalmologists, neuro-ophthamologists, rheumatologists, endocrinologists, kinesiologists, nutritionists, cranio-sacral therapists, homeopaths and acupuncturists) it seemed a radical idea that my wellbeing could literally be in my own hands.

I was delighted to realize that simply by exhaling, allowing myself to relax, and holding specific places on my body — called “safety energy locks”— could be energized, and severe pain and discomfort would dissipate.

Illness presented me with lots of time. Lying around unable to function in the ways I had been accustomed to, I welcomed the opportunity to practice something positive. That I am now strong and well again, and continue to practice Jin Shin Jyutsu self-help every day is testament to the positive results I found. We always have our hands with us and they are available at no cost! A deep passion to share this powerful and empowering art arose.

Our wellbeing depends upon the free and even distribution of life energy throughout our body, mind, and spirit. “When the stress and strain of daily living disrupts the movement of life energy, our mind, body, and spirit are all affected. Not only do we succumb to worry, fear, anger, sadness, and pretensions, but we increase our tendency to become ill or ‘out of balance,’” says Alice Burmeister, Mary’s daughter-in-law, in The Touch of Healing, a comprehensive guide to Jin Shin Jyutsu.

Our bodies have thousands of pathways for delivering energy to each cell in the body. These pathways can be compared to other systems of pathways, for example a system of roads in a city. While roads can be recognized as separate streets, they only function together as a system. When the flow gets obstructed or becomes sluggish or out of rhythm with the other pathways, a traffic jam results. Often the cause of a blockage is situated separately from the place where the worst of the traffic jam is felt. Similarly, in our bodies there is a complex relation between all the different energy pathways; cause and effect of symptoms are not always located in the same system, and seemingly unrelated symptoms can be found to be related when there is understanding of the whole.

The application of the art of Jin Shin Jyutsu restores movement, unobstructed flow and harmonious rhythm to the energy pathways of the body.

Electrical systems incorporate fuses to act as safety mechanisms when the flow of energy through the system is out of harmony. When the fuse blows and the circuit of energy is stopped, we are alerted that there is a problem in the overall circuit. Similarly, human beings have inbuilt safety fuses in the circuitry of our being; in Jin Shin Jyutsu they are referred to as “safety energy locks.” When these safety energy locks lock, uncomfortable symptoms can result; this discomfort draws our attention to the imbalance we are living.

These safety energy locks are not only locks but also keys. Each one offers us the key to a particular vibrational energy and is a resource for particular aspects of physical, mental and emotional wellbeing. The key is knowing where the relevant safety energy lock is, and simply holding these locations with the hands.

Gift to the Modern Western World

According to ancient written records, stored in the archives of the Imperial Palace in Japan, the principles of Jin Shin Jyutsu physio-philosophy were, in fact, widely known before the birth of Gautama Buddha, before the birth of Moses and before Kojiki (the Japanese Record of Ancient Things). For many generations it was passed on through verbal teachings and shared experience. Knowledge of this ancient art of harmonizing life energy faded gradually until the concept was virtually lost.

It was rediscovered in the early 1900s by Master Jiro Murai, who, after recovery from a terminal illness, in gratitude devoted himself to the revival of the art for future generations. Master Murai was a man of keen intelligence with great dedication and capacity for questioning. After years of systematic and meticulous research, he organized the body of ancient knowledge for transmission, as he wished to make the art available again.

In the late 1940s Master Murai invited an intelligent, young Japanese-American woman, who had arrived in Japan to serve as a translator and study diplomacy, to take a gift back to America. This woman was Mary Burmeister, born in Seattle in 1918. That Mary knew little of the healing arts when she met Master Murai did not stop her from studying with him for 12 years. It was, however, 17 years before Mary started sharing Jin Shin Jyutsu with people in the West.

“I just felt I had to know something before I could say I knew it. Then I realized you can’t say you ever really know an art like this. One day I found myself timidly putting my hand out to a neighbor with a back problem and saying, “Maybe I can help you.” After five years of working with her, I moved, and she then went back to her chiropractor, who called me soon after and requested that we meet. The chiropractor became my first student,” Mary recounts in an interview by Melissa Higgins published in the March/April 1988 issue of Yoga Journal. In the years following, as interest and demand grew, Mary tirelessly practiced and taught the art of Jin Shin Jyutsu throughout the USA and Europe.

One can discuss endlessly the commonalities between Jin Shin Jyutsu physio-philosophy and other systems of understanding the universe and creation including religions, numerology and astrology. Yet while Jin Shin Jyutsu has an intellectual component, it is not an intellectual practice; it is profoundly simple, and perhaps it is this aspect that people find so challenging. Jin Shin Jyutsu is gentle, non-invasive and disarmingly simple; for this reason, many people are initially sceptical about the possible efficacy and potency of the art.

Jin Shin Jyutsu is never about diagnosis and cure; it is always simply harmonizing. The journey towards harmony and balance is unique for each person. Consistency in receiving sessions as well as the regular application of self-help routines improves the effect of Jin Shin Jyutsu. In chronic or very acute conditions, sessions at frequent intervals are commonly advised. The benefits of Jin Shin Jyutsu are cumulative, so the more we practice it, the greater is our vitality and self-knowledge.

As an adjunct to other natural therapies or alongside allopathic medical treatment, Jin Shin Jyutsu can be beneficial in alleviating pain, supporting the immune system, boosting vitality and minimizing the side effects of strong medication such as chemotherapy. As Jin Shin Jyutsu generally brings deep relaxation that lasts after the session, it is a great helper in stressful times.

Because Jin Shin Jyutsu treats the mental, emotional and physical aspects of a person as a whole, it is not uncommon to see a range of positive benefits emerging. For example, a woman with stroke paralysis attending regular Jin Shin Jyutsu sessions was surprised that not only did the paralysis lessen significantly, and the muscle tone improve, but the anxiety she had held most of her life was greatly reduced. She began to sleep better at night, and her family and friends were amazed to see her skin looking younger and more radiant. She expressed that in many ways she was now in better condition than she had been before the stroke.

I have also seen healthy people discover simple support for the stresses and challenges of day-to-day living. Jin Shin Jyutsu self-help methods are so easy and unobtrusive that they can be used inconspicuously in any place and at any time; even children can use them effortlessly. For each of the levels of disharmony we are able to experience, so too there are deeper and deeper levels of harmony we can live. The art of Jin Shin Jyutsu offers a uniquely simple and empowering tool to support that individual journey.

While pursuing a London media career, Lynda Silk became ill with auto-immune disease. When she encountered Jin Shin Jyutsu, she became passionate about its boundless possibilities. She now practices Jin Shin Jyutsu with herself, clients and animals, and continues to study Jin Shin Jyutsu in recognition that a full understanding of this “artless art” will be a lifetime’s study. Contact Lynda at +27 84 875 4585 or email info@beingwellbeing.com. Visit www.beingwellbeing.com.