Legacy of the Tyrolean Iceman

Insights into ancient trade and medicine include startling evidence of Neolithic European acupuncture. 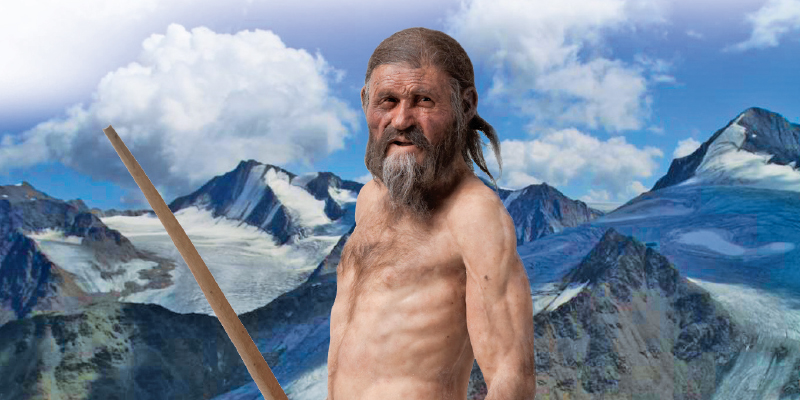 In 1991, two hikers in the South Tyrol Alps of Italy, veered off a path onto a boggy area and stumbled onto one of the most outstanding discoveries of the century: a mummy. The well-preserved body of a man lay in a blanket of ice three thousand two hundred and ten meters above sea level. He was a “wet” mummy, meaning humidity was retained in individual cells, a kind of freeze dried condition. It’s thought that he and his possessions were covered by a protective layer of snow that allowed air to penetrate for years. Only many years later was he covered with glacial ice. This kind of burial kept his body tissues elastic, suitable for performing detailed scientific investigation. He was fondly named “Otzi” after the area of the find, and he changed history.

About 45-years-old, slim in build, weighing about 50 kilograms (approximately 110 pounds), Otzi stood about 1.6 meters tall (about 4.5 feet). He had dark, wavy, shoulder length hair worn loose and he may have had a beard. He was fully clothed. He wore a grass matting, probably over his head, fastened with string. The pieces of leather, hide, and string made into clothing came from goat and bear, and were woven into a coat-like garment, leg coverings and shoes. Preserved with him in the ice was an extensive kit of tools, which allowed him to remain away from his home for long periods and to be self-reliant. He also possessed a medical kit.

The tool that proved to be a most surprising part of his kit was a copper axe. Otzi having a copper axe pushes the history of early man and his environment back almost 2000 years. The axe also gives clues as to Otzi’s social status: a copper axe denotes membership of a warrior or leadership class. His DNA identifies him as a member of the first independent Alpine cultural group called Tamins-Carasso-Isera 5 (the name denotes location). We know how old he was, where he lived and his status in his community, but who was he?

Otzi lived between 3350-3100 BC. He had resided in the general area where he was found for at least ten years. One theory put forth is that he could have been a shaman, but this is very unlikely since he possessed no ritual objects. He may have been a hunter or a trader. The ability to work in copper opened new industries and vigorous trade across Europe and the Middle East.

Otzi’s lungs were blackened with soot particles, a result of spending a great deal of time in front of open fires. Was he one of the elite who knew how to extract and refine copper? Did he travel, bartering with raw materials and finished products, and making far reaching cultural contacts? But there were no items in his kit to substantiate this theory. Was he a shepherd? The area where he was found was not considered a seasonal pastoral economy.

Physically, he had brown eyes, of the O blood group and also of a rare chromosomal group. His physique appears to be hardy, although his joints showed wear and tear. He was diagnosed with hardening of the arteries and predisposition to cardiovascular disease. He was lactose intolerant and the first recorded human case infected with the Lyme’s disease pathogen. It’s generally agreed that Otzi, perhaps the most closely examined patient of all time, was born and lived much of his life in South Tyrol between what is modern Italy and Austria.

And he was murdered!

Otzi’s tissues have given up much information but just as many questions. Fingernail markings showed he had been living under stress for eight to sixteen weeks before his death. Had he been banished from his community? Was he fleeing across the inhospitable Alps to escape some crime, some prejudice against him, some delayed punishment, only to be found and killed? He was certainly pursued and involved in hand-to-hand combat before he died. One of his hands shows a cut made in a recent fight prior to his death. He sustained head trauma from a skull fracture with bleeding in the back of the brain.

He could have survived these assaults. He may have hid from his enemies for a while but eventually was hunted down. He bled to death from an arrow wound. The arrow pierced a major blood vessel and damaged nerves in his left arm. He may have crawled to safety but his arm was probably paralyzed. Otzi had reached safety too late.

Discovering this mummy has had an astounding effect on the history of early man. He appears to be quite sophisticated for his time. Having copper tools changes modern ideas about his civilization, making it was much more advanced than originally perceived. The community was mature and its members lived in the area where he was discovered for a long period of time as evidenced by a diversity of talents and duties. They had discovered rich mineral deposits and perfected smelting. Tools and weapons were objects for trading and wealth, with trader/merchants who crisscrossed through parts of Europe and probably the Middle East extending their community and bringing back new ideas. These wanderers would have experienced a multifaceted world. Early merchant/wanderers could return home with new ideas, customs and practices.

Otzi’s belongings imply that he may have been one of these wanderers. His clothes, his weapon and his medicine bag show that he was outfitted to travel. Why did he fall out of favor? What extraordinary grievance did he commit against his group? Some disturbing incident must have happened several weeks before his death, tipped the scales against him and he was ostracized. Perhaps he fled secretly but he didn’t get far. He was pursued, attacked, sustained mortal wounds and left to die.

The relics preserved with our ancient mummy give a few answers and insights into his culture. Along with a merchant/trader class, Otzi’s community had an herbalist/doctor and there is evidence of an acupuncturist. He possessed a first-aid kit with various herbs. Threaded on two hide strips around his body were round lumps of fungus, the fruiting body of the birch polypore fungus. The fungus was known then and even used today for its antibiotic and styptic properties (to halt bleeding). It appears Otzi may have been taking the fungus for parasites; he had signs of whipworm eggs in his gut. 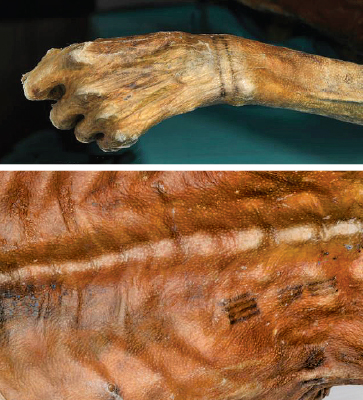 Otzi’s body was covered with 50 tattoos. They are in groups of lines and crosses located at points where his body was subjected to considerable strain. Considering his age and the climate he lived in, he needed an answer for arthritis pain. Apparently he found an answer. Some form of acupuncture had kept him going. The vertical lines are located to the left and right of the spinal column. Other tattoos are on the left calf, right instep, inner and outer ankle joint, left wrist, the back of his right knee and beside the left Achilles tendon. The tattooed areas correspond to acupuncture points and lines called energy meridians. Arthritis in the spine, knee joint degeneration, and leg problems were part of his medical history and the tattooed areas show exactly how to treat these conditions through acupuncture today.

Where did he get those tattoos? We can assume he traveled, but how far from home? If he traded copper implements or hunted down supplies needed for smelting, did he get to the Middle East? Did he wander even further, somewhere perhaps in an Arab country or along early versions of what was later called the Silk Road, where he was introduced to acupuncture? Did he bring back information of this medicine in the form of tattoos? Was he able to instruct someone in his community on how to treat him?

Having the information of point locations and effects at this time in history means that in Otzi’s life span, this medicine was already an established healing system, set up and ready to use. How wide was the practice of needling? Was it a local phenomena? It doesn’t seem logical that if the system worked, it would be kept secret. It could have spread through parts of Europe although there is no other evidence of it. Does this mean acupuncture could have originated in Europe and spread East? Or was Otzi the bearer of a new medicine he somehow found in his travels? Did he create enemies in his community when he introduced his new find? Was this why he was hunted down and murdered?

It has been assumed that acupuncture is an Asian product. At the time Otzi lived, all parts of northern and central China supported advanced societies. From West to East, societies in Europe to civilizations of China and everything in between provided plenty of adventure, danger, and exchanges of knowledge. It was not just goods but also ideas and cultural customs that were exchanged on West-East trade routes, and then with North-South areas of cities and trade. The Neolithic world was an incredibly diverse place.

And what of those tattoos? It is astounding to think that he had been treated with acupuncture long before its currently accepted earliest dates of practice, somewhere between 2000-500BC. Otzi turns the history clock back, making acupuncture even older than previously believed. Perhaps acupuncture treatment flourished as the medicine of his time or was Otzi the only human in Neolithic Europe to know about this strange medicine? Many questions and many theories about an ancient medicine and early man.

With over 30 years experience, Marie Cargill, LicAc, is a Boston-based homeopath, licensed acupuncturist, herbalist and holistic health expert for people and pets. Her newest book, Cancer and Your Pet: a Guide to Alternative and Integrated Treatment, is a must read for pet owners. Visit www.mariecargill.com.