Medicare For All Remains Best Cure For Sick Healthcare System 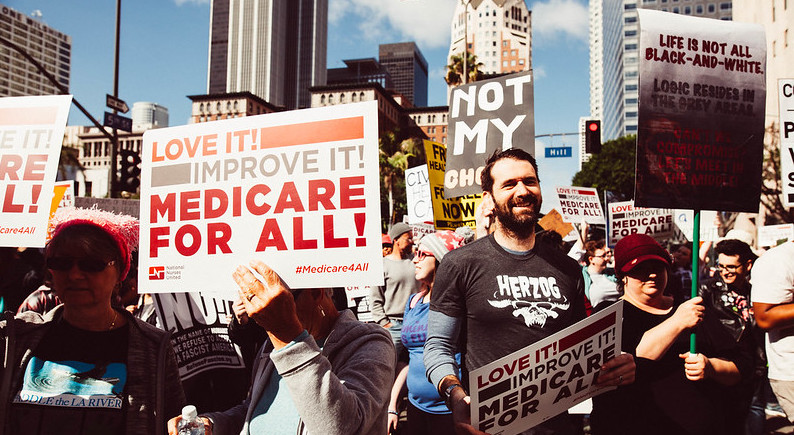 Early voting in the 2022 midterm elections has begun in many states, and inflation, the economy, and recession are top concerns for most voters, according to polls. Democratic political consultant James Carville’s 1992 presidential campaign quip, “It’s the economy, stupid,” has been getting lots of use lately. If true, it’s odd that healthcare has hardly been raised as a campaign issue, even though it accounts for 20% of the U.S. economy. U.S. healthcare is a complex patchwork of public and private entities and programs, resulting in the most expensive per capita healthcare in the world. Yet, the health of people in this country, on average, is worse than in other wealthy nations.

“Medicare for All is largely absent in media coverage. Could this be related to the media’s money stream, the constant barrage of pharmaceutical and insurance company advertisements?”

A key driver of this disparity is the hugely profitable private health insurance industry that has inserted itself between patient and doctor. This broken system consumes hundreds of billions of dollars annually and should be central in every election debate. One solution to this uniquely American problem would be adoption of single-payer healthcare, or Medicare for All, eliminating private insurers entirely.

Dr. Steffie Woolhandler is a primary care physician and co-founder of Physicians for a National Health Plan, which advocates for a U.S. single-payer system. She appeared on the Democracy Now! news hour in November, 2020, explaining,

“What we really need is to provide good insurance to everyone. We call that single-payer or Medicare for All. It’s a type of system that the rest of the developed world has, like Canada, like Scotland. You enroll in insurance the day you’re born, and you keep it your entire life. It’s not free; you pay for it through your taxes. But it’s a much more efficient system, because you don’t have all this administrative complexity and hassle that is eating up a huge share of U.S. healthcare spending, probably more than a third. So, by simplifying healthcare, moving it away from a business to a public service, you save a lot of money, that allows you to cover everyone and also remove copayments and deductibles, which have been a major problem in the ACA [Affordable Care Act].”

The COVID-19 pandemic has exposed enormous gaps, flaws, and inequities in our healthcare system. Widespread access to publicly-subsidized vaccines here has radically altered the course of the pandemic, but COVID-19 is still causing deaths and hospitalizations and stressing our healthcare delivery system, especially frontline healthcare workers. The CDC reports that 323 people on average are dying daily from COVID in the U.S. This mostly preventable death toll is predicted to get worse this winter as people move indoors and new Omicron variants emerge.

This week, Secretary of Health and Human Services Xavier Becerra extended the COVID-19 public health emergency for another 3 months. This provides for a significant array of taxpayer-funded support, like free COVID vaccinations and testing kits. Perhaps more importantly, the emergency declaration extends added access to Medicaid coverage and CHIP (Children’s Health Insurance Program). When the Public Health Emergency ends, HHS estimates, up to 15 million people will lose their health insurance.

Medicare for All is largely absent in media coverage. Could this be related to the media’s money stream, the constant barrage of pharmaceutical and insurance company advertisements? Nevertheless, single-payer is being championed by many progressive candidates. Rep. Cori Bush, Democratic Congressmember from Missouri’s 1st Congressional District, is running for reelection as she completes her first term. Cori Bush is the first African American woman representing Missouri in Congress. The formerly unhoused single mother is also a nurse. In her just-published memoir, “The Forerunner,” she writes,

“As someone who has been either uninsured or underinsured for most of my adult life, I know what it’s like to be burdened by thousands of dollars in medical debt and to have to seek out routine medical care in an emergency room rather than with a primary care doctor. And as a nurse, I’ve seen too many patients forgo mental health services or be forced to ration their insulin because they couldn’t afford the cost of treatment or medication. It’s also why I fight for Medicare for All, including for easy access to comprehensive mental health services and affordable prescription drugs, because health care is a human right and must be guaranteed for everyone.”

Unmitigated greed of private health insurers and drug companies is a major driver of inequality in our society. Medicare for All is a long-overdue prescription for our ailing healthcare system.

Denis Moynihan has worked with Democracy Now! since 2000. He is a bestselling author and a syndicated columnist with King Features. He lives in Colorado, where he founded community radio station KFFR 88.3 FM in the town of Winter Park.