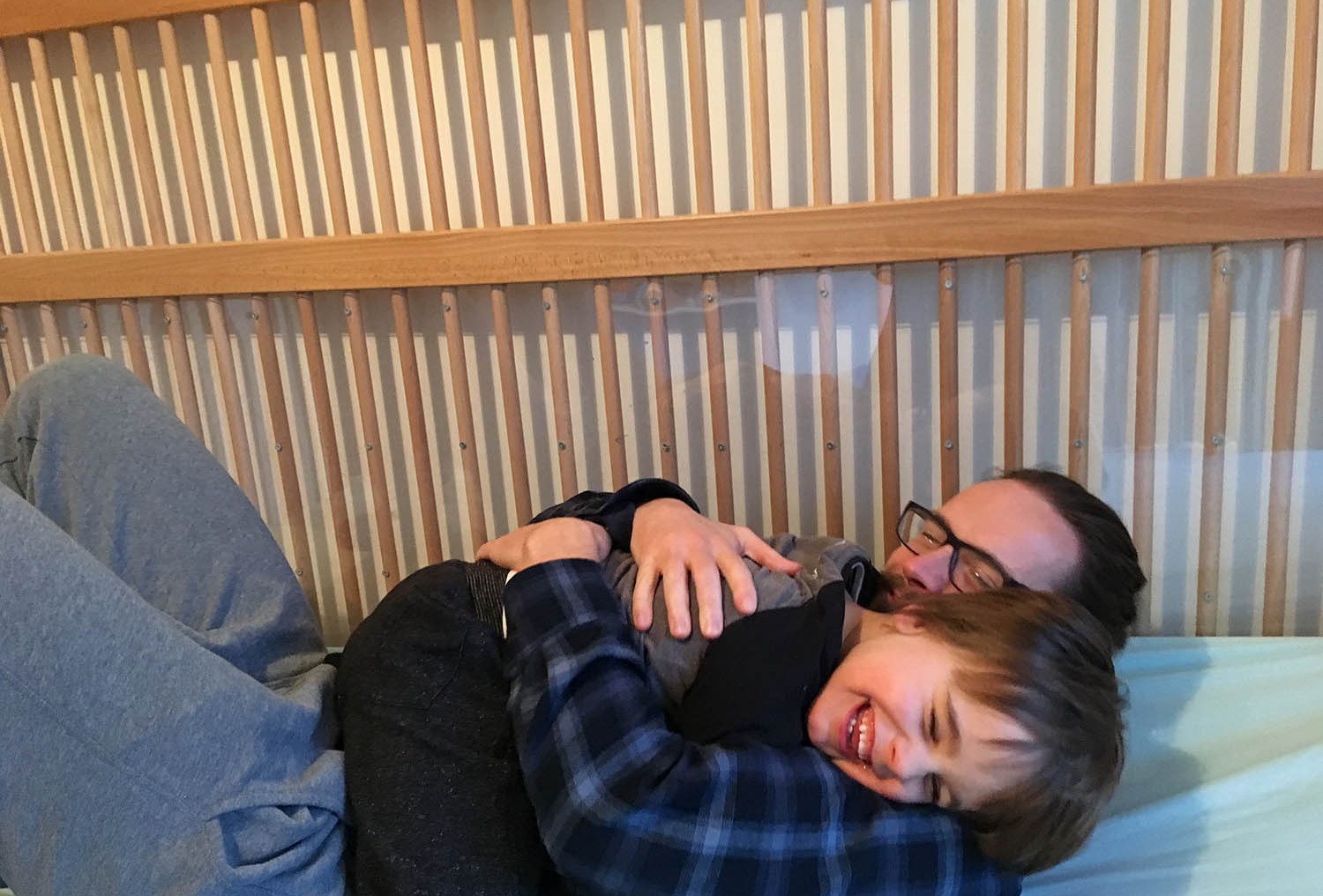 Wayne pilots us down wide, empty streets lined with houses in desert hues, typical for suburban Phoenix. I’ve traded Melbourne’s wintry weather for the Southwest’s arid splendor to carry out research for my book, Worlds of Care: The Emotional Lives of Fathers Caring for Children with Disabilities (University of California Press, 2021). I want to explore how fathers caring for children with severe cognitive and physical disabilities make sense of their circumstances, and learn about the factors that mediate their experiences. I hope that by understanding the lives of these men I can better understand my own.

Not much in my past prepared me for my life as a carergiver. When my son Takoda was given the diagnosis of global developmental delay when he was 5 months old, I felt as though I was cast adrift on some strange and unfamiliar sea. I was deeply uncertain about how my new life fit within the overall context of my life. I decided I needed to find out how men who become caregivers, fathers like me, find solid ground and move forward.

Wayne is in his late 40s, dressed in cargo shorts and a plaid short-sleeve shirt. We’ve been hanging out for a couple of weeks, and today he is taking me and his two boys to their favorite barbecue restaurant. We’re in a dusty white minivan that Wayne’s local church procured for his use until he can get another job and back on his feet financially. Noah and Nick sit in the back seat. Noah is 14, all arms and legs. Nick is 10 and solid, like a miniature quarterback. He stares silently out the window, while Noah leans forward in his seat, eager to be part of our conversation.

Wayne tells me how much they love watching comedian Frank Caliendo, and how good Noah is at copying his impersonations.

Nick says something, but it’s faint and indistinct.

“What’s that, Nicky?” Wayne glances at him in the rear-view mirror, but Nick’s eyes are transfixed on the passing scenery. “Oh, you’re just talking to yourself. All right.”

Wayne returns his gaze to the road. “Noah could do, like, Al Pacino …”

Wayne giggles to himself, charmed by what he thinks is his son’s uncanny ability.

After parking outside the restaurant, Wayne takes Nick’s hand as we all make a beeline for the entrance, eager to escape the pitiless heat. It’s an unfamiliar sight to see a man holding hands with a child of Nick’s age and stature, a moment that briefly arrests the flow of time. 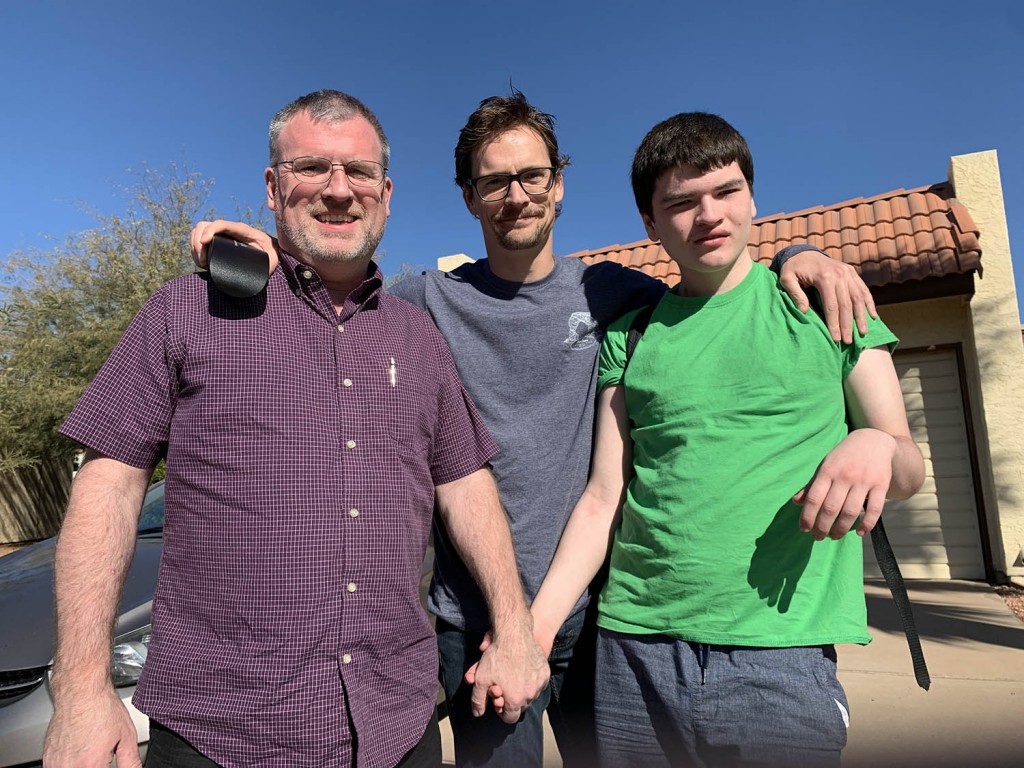 They introduce me to their favorite waitress, “blessed Billie”—a 60-year-old woman with a take-no-shit kind of look—and we sit in a booth beside a wall adorned with Chicago-themed paraphernalia.

“Are you OK?” Wayne asks Nick, leaning into him. Nick looks at his father for a moment and then softly presses his head against his. They stay that way a moment, forehead to forehead.

Billie reappears, beaming at Nick and Noah. “My boys are growing like weeds.”

Billie knows all about the difficulties and joys Wayne has faced as the sole caregiver of two boys who have autism. She tells him that a regular customer of hers, a guy named Chris, revealed to her the other day that he has a son who is non-verbal. She asked Chris why he’d never told her before, to which he’d replied, “I don’t know, it’s rough.”

When I was researching my book, parents like Wayne spoke to me about the overwhelming responsibility of caring for someone with significant cognitive and physical disabilities. In the case of fathers, traditional understandings of masculinity that valorize individuation and eschew emotional intimacy can aggravate the difficulty.

One father, Earl, recalled that the burden felt so immense early on that he attempted to escape the domestic space of caregiving by burying himself in work, “taking care of the things men do,” as he put it. After his son was diagnosed with Hemimegalencephaly, a rare congenital condition characterized by the enlargement of one side of the brain, Earl spiraled into grief, mourning his lost expectations and dreams. “I’d never been down this road before,” he said. “We can’t play baseball with our kids, go bowling, you know, do typical things. I found myself completely isolated. I couldn’t find other dads in my situation to share with.”

Earl’s fear of being judged as emotionally weak, and the male breadwinner/female caregiver gender roles that nurtured his escapism, slowly became untenable as his estrangement from his family grew. I asked him if there was any one particular moment that he attributed to his change of heart about caring for his son. He said, “I think one of the big things was, in the evenings when I was home from work, we would roll around and wrestle on the floor. He’d giggle and laugh. He couldn’t crawl or walk. He would roll to get to me, and it was just like, ‘God, he’s rolling to get to me.’ How do you not be emotionally touched by that, you know?” In the end, the emotional bonding nurtured through their physical interactions was responsible for Earl’s emotional return to his family and involvement in the practical acts of providing care.

I know this intimacy well. I often sit on the floor with Takoda and gently sing into his ear. He vocalizes in turn, choosing from his repertoire of giggles, squeaks, and squeals. He rarely makes eye contact, but when he responds there is mutuality. In these fleeting moments of emotional symmetry, the boundaries between our bodies become less defined. It’s a profound experience of connection and understanding.

No time seems to have passed before Billie returns with lunch. Nick quickly plunges in, mumbling quietly to himself. Wayne and Billie continue to talk. Noah remarks on how much Nick can eat, and I spill my soda, which cascades onto the floor.

“Nick is just taking it all in,” Wayne says. Nick’s low, indistinct sounds grow audibly louder, and Wayne gently puts his hand on his leg.

Wayne admits that when his boys were little, he’d felt consumed with fear and dread over his role as the breadwinner. He worried that he’d have to outlive his children and work until he was 120 to financially provide for them. Earlier in the week, he’d described his feelings of failure and shame over losing his job. His inability to prove his worth in the workplace left him feeling discredited as both a man and as a father.

Fathers’ experiences of caregiving are often beset by tensions and contradictions because of internalized gender-conforming ideas about how men should act and what men should do. When fatherhood is too narrowly defined around emotional restraint and success in the marketplace, other equally important physical and emotional expressions of care are neglected, often to the detriment of men’s own needs as fathers. Many years have passed since Wayne’s boys were small. I wonder if the responsive, patient, and attentive qualities he has acquired and strengthened through caregiving now inform his understanding of manhood.

Wayne had told me recently about an altercation he’d had with his own dad, a strong 80-year-old former Marine he respected greatly. One evening, when Noah was especially inattentive as he worked on a jigsaw puzzle with his grandfather, Bill was impatient and particularly abrasive toward him, the same way he’d been when Wayne was growing up. Wayne mustered the courage to call Bill outside and tell him that his domineering and controlling style was incompatible with meeting the boys’ need to feel safe and loved. Wayne admitted to his dad that, through caring for them and helping them grow, his own fathering style and priorities had changed.

In being with their children and nurturing a sense of relatedness and responsiveness to them, parents often become attuned to their everyday situations in new ways. Different things matter, and we make new commitments that give our lives purpose and influence how we understand ourselves. In that way, father-child caring interactions can change the ways we men relate to our children, ourselves, and others, and shake loose deeply rooted attitudes that no longer serve our best interests and those of the people we love. This is the moral potential of caregiving.

Before we leave, Billie embraces the boys and hugs me, too. Outside, the Sonoran sun has lost its edge. Shadows lengthen and colors drift across the distant mountains. On the way back to the van, Wayne and Nick hold hands, and Noah does another impromptu impersonation. I follow closely behind Wayne and his sons.

Aaron J. Jackson is an anthropologist living and working in Melbourne. His research focuses on fatherhood, care, and disability.