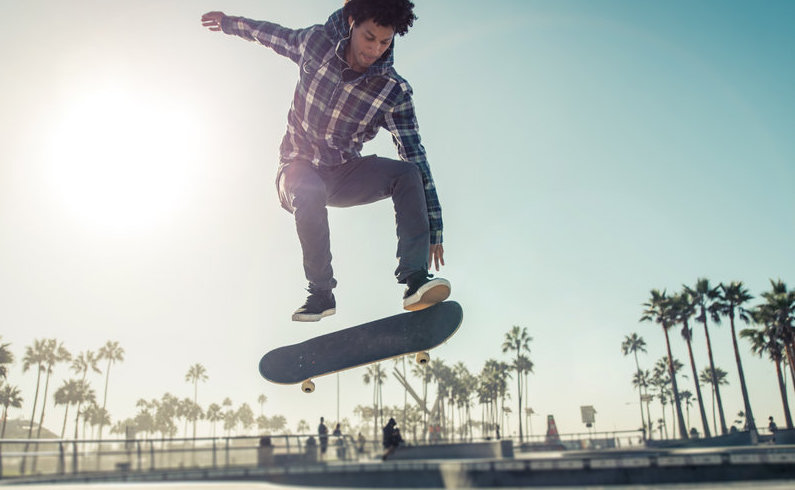 Over the last decade the numbers of those identifying as “Spiritual But Not Religious,” or SBNR, have continued to increase. In 2017, Pew Research Center found that a quarter of Americans identified as SBNR.

Those identifying as spiritual tend to adopt different forms of spirituality while embracing some elements of religion or rejecting religion altogether. Many scholars believe this to be an attempt by individuals to resist religious authority. As individuals explore different spiritual resources, they may blend forms of practices like yoga or meditation while also taking on everyday life experiences as part of a spiritual journey.

In 2020, along with a research colleague, I began looking at everyday practices that might be considered spiritual.

Building upon other research projects noting the similarities between sports and religion in society today, we interviewed skaters at skate parks to see how they understood skateboarding.

After conducting our research, we concluded that there are spiritual elements to skateboarding for some within the skateboarding community.

Dealing With A Harsh Urban Environment

For our research, we began hanging out at three local skate parks as a way of establishing trust with the skaters. My research colleague is a skater, and she educated me on specific tricks, the skating culture and the slang. Noting those who tended to be regulars, we began to conduct interviews, asking the skaters about style, tricks and, ultimately, what skateboarding means to them. Because of the pandemic, we pivoted to asking skaters to complete an online, open-ended survey. We were able to garner seven interviews and 24 survey responses. None of our respondents identified with any religious tradition.

The skaters we interviewed often acknowledged that through skateboarding, they were able to give meaning to their local spaces, which tended to lack natural fauna. Accepting one’s environment of concrete sidewalks, stairs and parking lots can lead to a spiritual practice of imagination.

Where many people see the banal aspects of urban geographies, skateboarders can see opportunities for exploration, as we found. One skater explained, “I don’t see skateboarding as a sport, but a way to navigate and manipulate an urban environment in ways you see fit.”

Skateboarding can be dangerous and lead to multiple types of physical injuries. A quick scan of skating videos on YouTube will demonstrate how often skaters fail to land tricks or even injure themselves skating.

After we analyzed our interview data, which is being published in a forthcoming journal, we began to understand failing as a spiritual exercise. Whereas many religious objectives include working toward perfection, spiritual practices often embrace the imperfect.

What we learned is that the dangerous elements of skateboarding separate the exercise compared to sports that are deemed safer. Certainly there are risks involved in many team sports, but skateboarders understand those risks differently. In skaters’ minds, the dangerous elements of skateboarding separate it over and against safer sports. They understand the risks as something crucial and valuable to be accepted.

“You don’t always want to land stuff, you know?” explained a skater, “And that’s how you know you’re alive because you almost died kind of thing.” In fact, failing and falling (known as slamming) is integral in skating practices, a spiritual rite of passage. “Falling is easily half the battle, if not more. That’s the rite of passage to being a ‘skateboarder.’ It’s not your friend. It hardly likes you. And it will put you in your place real quick.”

Furthermore, the rite of passage of slamming proves a skater’s authenticity into the skating community. “You’ve got to be willing to pay for your time in blood, or else you’re just a culture vulture,” is how one skater described this rite.

Skateboarding As A Spiritual Cure

The more we spoke with skateboarders, the more we realized that skating is a spiritual exercise, possibly a kind of remedy against boredom in modern life. Past studies have shown that skateboarding provides moments of autonomy and freedom.

Skateboarding was almost like a spiritual tool to re-imagine the monotony of life in urban geographies. Landing a kick flip or grinding down a handrail yields an exuberance and an outlet. One skater explained, “Skateboarding gave me independence, confidence and a way to express myself and my artistic traits.”

Another skater told us as he sat on his skateboard and the sun set: “You have to be willing and dedicated so much for something that actually has no value to anyone except yourself. Falling teaches you that sometimes in life shit’s not easy. There are so many obstacles along the way, but you need to figure them out, learn, adapt and continue to move forward and obtain the goal you’ve been wanting to accomplish.”

Others described the ways in which skateboarding is a meditative practice. When we asked another skater to simply describe what skateboarding is, he offered: “Infinity, and it represents openness. It’s a lifestyle for inventor minds. Skateboarding is falling down and getting back up. Inventing. Playing for the sake of playing. Toying around. That is why I do it and what I feel from my participation is similar to meditation, like a lulled-out, relaxed state – the very act of riding the board changes the way you move through life.”

Although skateboarding and skateboarders generally are stereotyped as vulgar trespassers who damage property, skateboarding itself seems to be a way for some individuals to cope with the conditions of the contemporary world.

We’re not the only researchers to find correlations between skateboarding and religion and spirituality. Sociologist Paul O’Connor discovered religious elements in skateboarding, like iconography of certain popular skaters and pilgrimage spaces marked as sacred in the skating world. He even describes skating as a “DIY (Do It Yourself) religion.”

Spiritual practices don’t always mean supernatural. Instead, spirituality is often about examining the everyday and asking how meaningful exercises can be developed to cultivate the individual into a better person.

Terry Shoemaker is an Americanist scholar focusing on religious change in contemporary life. This includes the ways that religion and religious people adapt, convert, deconvert, reform, and abandon aspects of their religiosity or spirituality.