Smashing All Previous Records, 2015 On Track To Be Hottest Year Yet

...and 2016 may likely be even hotter, scientists warn

The planet Earth, with mankind's help, is leap-frogging into sweltering new territory.

With the monthly update from the National Oceanic and Atmospheric Administration (NOAA) out Monday, three of the world's official climate reporting agencies agree that June 2015 was the hottest on record, and that this year is shaping up to be the hottest year yet.

What's more, scientists say this trend is likely to continue and that 2016 could very well surpass 2015's record-breaking temperatures.

This followed reports from NASA and the Japan Meteorological Agency last week which found similar results. According to both NASA and NOAA, the year-to-date period (January-June) was also the warmest such period on record, with four of the six warmest months in recorded history occurring so far in 2015, putting us on the path to breaking 2014's record as the hottest documented year.

As journalist Andrew Freeman notes, "the heat in 2015 isn't just breaking records, it's smashing them."

"This extra bump in temperature, when combined with the long-term warming of the planet due to human-caused emissions of heat-trapping gases like carbon dioxide, makes it likely that 2015 will be Earth's second consecutive warmest year on record," Masters wrote on his Wunderground blog on Monday.

"Climate change is a long-term driver, so that’s like standing on an escalator as it goes up," Arndt said during a press conference call last month. Alternately, El Niño, "is like jumping up and down while you’re on that escalator."

"So, the longer that we go into history, we’re riding up the escalator. And now that we're getting an El Niño event, we happen to be jumping up at the same time, and so they play together to produce outcomes like what is likely to be the warmest year on record,” Arndt said.

Further, citing data from the International Research Institute (IRI) for Climate & Society, ThinkProgress notes that there is a more than 85 percent chance that this current El Niño may last until May 2016, with the strongest period being December through February.

"If this pattern plays out, then 2016 would likely top whatever temperature record 2015 sets — again, possibly by a wide margin," ThinkProgress reports. 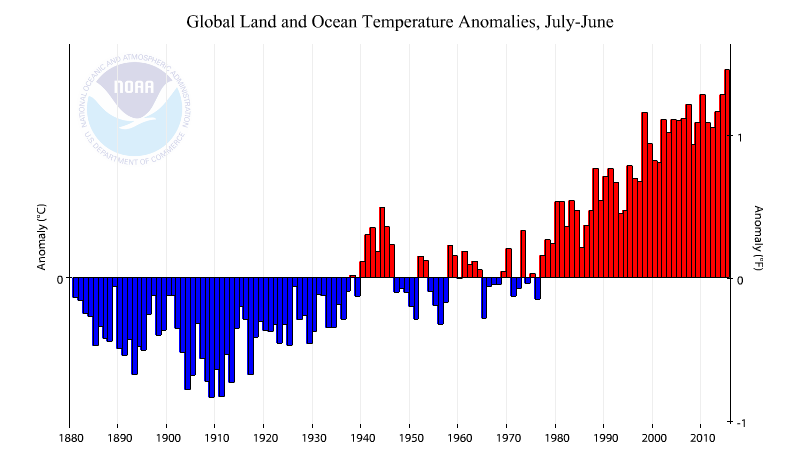 Lauren McCauley is a staff writer for Common Dreams.

See also:
Staying Human in a Time of Climate Change: New Author on Science, Grief, and Hope
Earthtalk: Where Should Climate Refugees Go?
Pope’s Climate Letter is a Radical Attack on the Logic of the Market