Smoked Salmon For Amelia: A Native Perspective On Homelessness 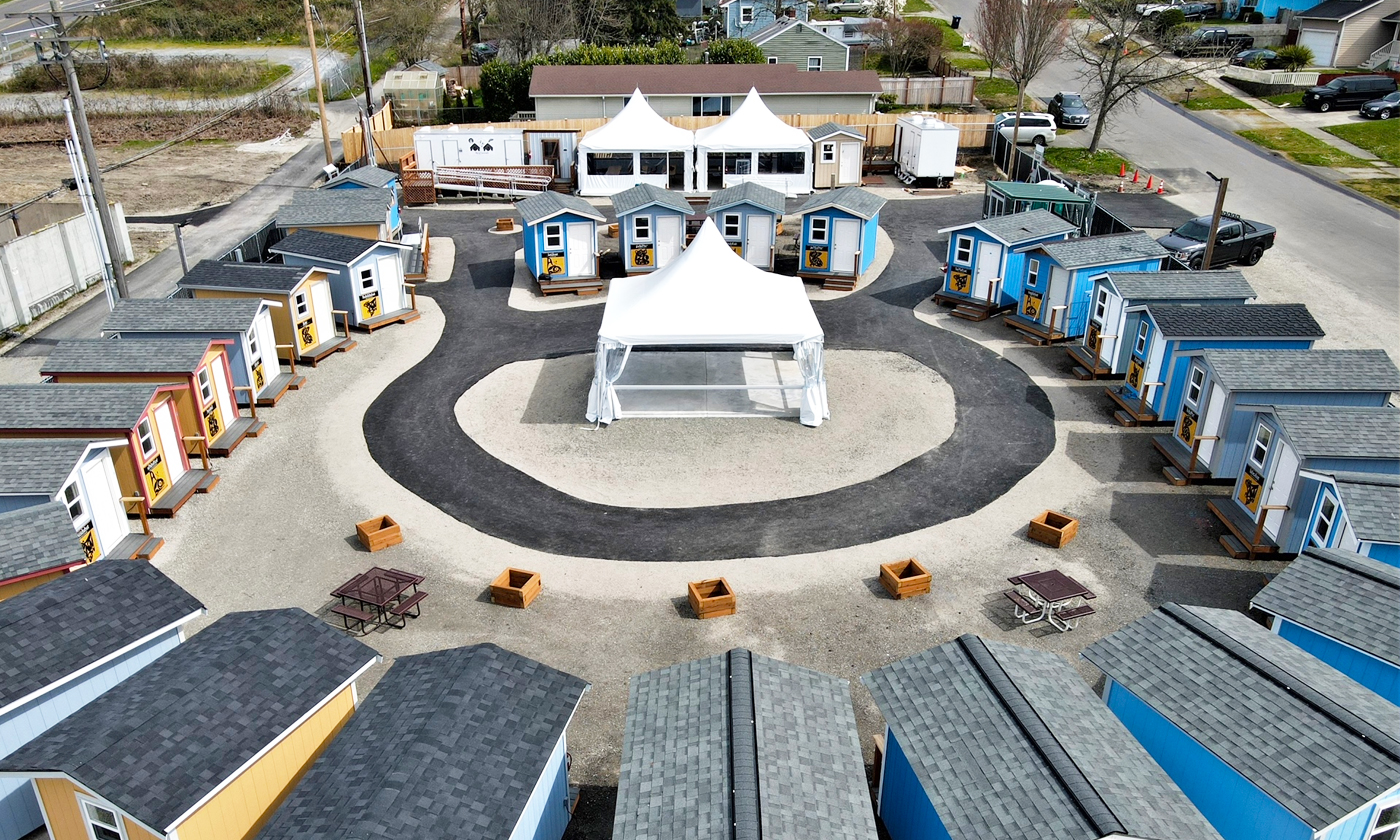 The city of Tacoma, Washington, now sits on what was once Puyallup tribal land. Many little villages of wooden longhouses once sat by streams and rivers. Food and shelter for the Puyallup came from the land, as did their identity and sense of being. They were bound to their environment through song, story, art, and ritual.

The Puyallup knew nothing of homelessness. Strong kinship ties made sure everyone had a place to stay and food to eat. Today, that spiritual tapestry is virtually gone. The new non-Native residents of Tacoma don’t talk about the spiritual nature of the land. Instead, they refer to it as “the streets.” 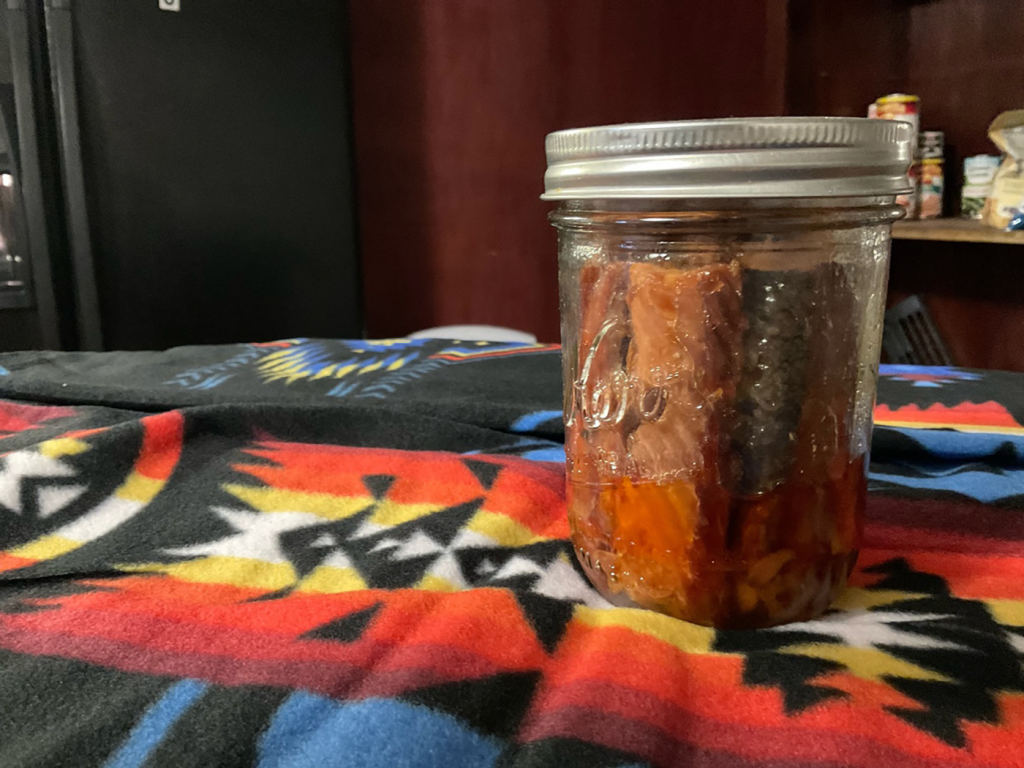 “Hi! I have something for you,” I said, holding out a jar of home-canned smoked salmon strips.

From inside a fortress of apparent junk on a street corner a block from my house, a young, homeless African American woman came out of her makeshift shelter of tarps and took the jar.

“Thank you,” she said in a small voice.

“I’m waiting for Poppy. He said he’s coming back,” she said, turning away but still keeping an eye on me.

I had first noticed Amelia one day last summer when I got off the bus near my house in South Tacoma. A big pile of debris on the sidewalk next to the bus stop nearly blocked the bus door. Tarps, boxes, empty bottles, string, small broken appliances, and cardboard formed an igloo around Amelia.

The police soon shooed Amelia away from the bus stop. She moved her camp a half-block down the street. The dwelling grew over time, and people in the neighborhood got upset. They posted pictures of her camp on social media and griped about her.

I stood up for her by posting a comment saying she’s a human being who deserves respect like anyone else. I was attacked viciously. One man wrote that if I cared about her so much, I should let her move in with me. Many pointed out that homelessness can bring drugs, crime, and unhealthy conditions into our neighborhood.

I knew what it was like being homeless. That’s why I took the smoked salmon to Amelia. I needed to tell her what no one on the street ever told me: that she was important and her life mattered.

The Maze Of Assistance For The Homeless

I wanted to help Amelia, so I contacted Maureen Howard of the Tacoma Pierce County Coalition to End Homelessness, who had recently written a moving piece on the subject for the Tacoma News Tribune.

“Unfortunately, for a single woman on her own, there aren’t many options,” Howard told me. “She could probably get into a women’s shelter, but then she’d have to share living space with other women, and that might be a problem for Amelia.”

I emailed the Tacoma Neighborhood and Community Services office requesting help for Amelia and received a response from the office’s assistant director, Allyson Griffith. She said they were well aware of Amelia, and that she had refused their attempts to help her.

In a later interview with Griffith, I learned that 1,005 people are living in Pierce County emergency shelters or transitional housing, according to the county’s 2021 Homeless Point-in-Time Count. Most live in the county’s largest city, Tacoma. No survey of those living outside was done in 2021 due to the pandemic, but the previous year counted an additional 914 unsheltered people living on the streets. So a more realistic current total of those unhoused living in and around Tacoma today—a city of 200,000 people—would be close to 2,000.

According to the survey, half of those experiencing homelessness are White, about one-fifth are Black, 18% are listed as “multi-racial,” 6% are Native Hawaiian/Pacific Islander, 4% are Indigenous, and 1% are Asian. The top three reasons given by survey respondents for their homelessness were family crisis, no affordable housing, and job loss. About 41% self-reported mental illness as a disability.

Help was available for Amelia. But there was one major obstacle: She didn’t want their help, and the city couldn’t force her to take it.

I checked on Amelia whenever I walked to the store. I’d give her a little money and ask if she needed anything. Understanding her was difficult, because she spoke so quickly and the traffic was so loud. But she kept mentioning the name Poppy, and one day, she cautiously revealed a little more about him.

“Poppy took my children, took them to the hospital. He told me he’d come back and get me. I’m waiting for him,” she said.

“Do you really think he’s coming back?” I asked.

Amelia refused help from the city because she was waiting for Poppy to come back and take her to her children. She had been waiting since last summer, and here it was November. I felt like crying as I walked home after she told me that.

A Place Of Transformation

I discovered the Puyallup tribe has its own tiny home village for the homeless called “ʔay’gʷasilali” (pronounced Igwasilali), which is a Whulshootseed word meaning “place of transformation.” Located on Puyallup trust land, the village has 30 tiny homes, each with heating and electricity. On-site staff from the Low Income Housing Institute are available 24 hours a day, helping residents connect with social services. Plumbing, cooking, and laundry facilities are located in a separate communal building.

The land was blessed last February in a ceremony by the tribe before construction began. Tribal members danced, drummed, and sang. Puyallup Culture Director Connie McCloud offered a prayer that the land be a place where homeless tribal members are welcomed and helped to heal.

Sharon Lee, executive director of the Low Income Housing Institute, first came up with the idea for tiny home villages in 2015. Her office determined that structures under 120 square feet are exempt from most building code requirements. They could be built quickly and without complex permits. Tiny homes are a vast improvement over tents and tent cities. The institute now operates 16 tiny home villages in the Puget Sound region.

“They are a transitional housing option,” Lee said. “Most residents typically stay about three weeks before we’re able to place them in more stable housing.”

I asked Lee about my friend Amelia. Since she’s not Puyallup, she’s not eligible for their tiny home village, but Lee told me there are two other villages in Tacoma. She would have someone from the institute go out with me to talk with Amelia about her options. I was ecstatic. 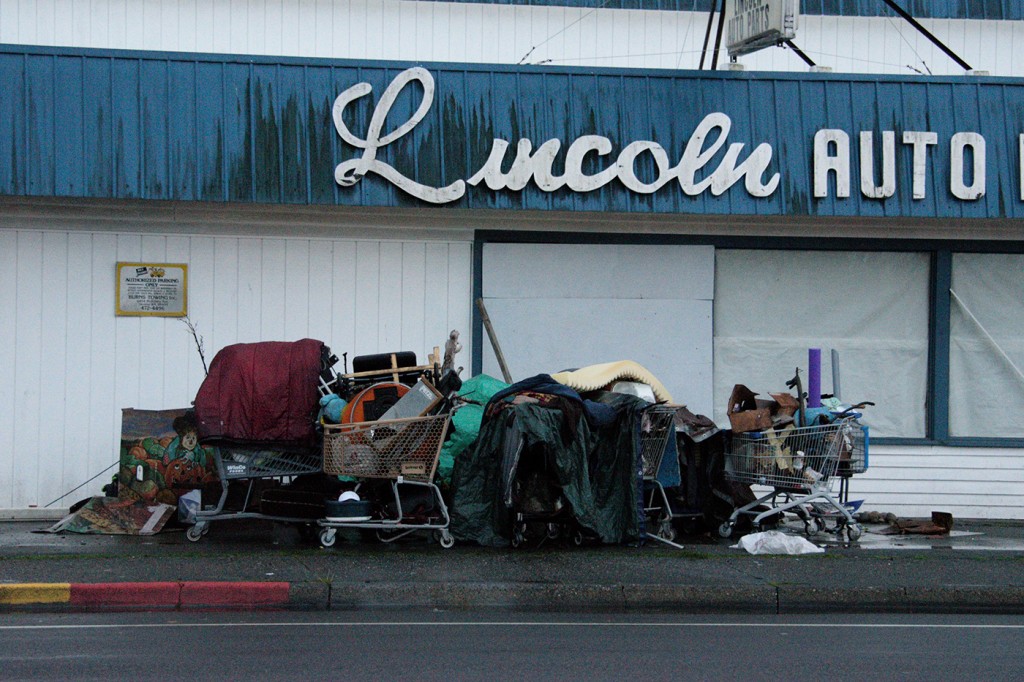 The next day, I went to Amelia’s camp to tell her the good news. As I approached, I saw three city workers loading her belongings into a dump truck. I ran up to them and asked what happened to the woman who was living there.

“She got into a hotel,” one worker told me.

The city of Tacoma, the city of Lakewood, and Pierce County had assisted the Low Income Housing Institute in purchasing the Comfort Inn located just south of Tacoma in Lakewood and converting it into a homeless shelter. The outreach people came and offered Amelia housing there, and this time, she accepted.

“I guess because the weather is getting cold, or who knows why, but she finally accepted help,” the worker said.

As I walked home, I felt happy but also empty. Did all my concern for her do any good? She wound up getting help all on her own. Did I make any difference?

I know not all homeless people are like Amelia. Many different paths lead to homelessness. But from a Native perspective, the ultimate cause of homelessness is our spiritual break with the land.

The modern world commodifies every aspect of our lives, requiring most of us to sell our labor to survive. If we are forced by circumstance to live outside this economic system, we are banished to the streets.

Once, love and kinship held together the Indigenous people of what is now Tacoma. They did not control the land with money. They were the land. That’s what Indigenous means. Balance was of utmost importance. And the sight of a confused young woman living outside in squalor is something they would have tried to set right instead of complaining about it.

I remembered the smoked salmon. Amelia made a point on several occasions to tell me how much she liked it. That always made me feel good. The salmon was caught, smoked, and canned by Indigenous people, people of the land, and it made a big impression on her.

I’ll never know if she was reunited with her children. But I do know I treated her with honor and respect. I fed her Native food and cared about her problems. Maybe that eased some of the crisis from her mind. I realized I was not her rescuer. I was her friend. That was enough.

Frank Hopper, Kaagwaantaan, is a freelance journalist covering Indigenous people. He focuses on the Pacific Northwest/Alaska region. His work has appeared in Last Real Indians, The Stranger, and extensively in Indian Country Today. His self-titled YouTube channel features videos about Native issues. He can be reached at tigerskin62@gmail.com. His YouTube link is https://youtube.com/c/FrankHopper1