The Best Way To Say “No”

Learning how to say no could easily be described as one of the best-kept secrets to happiness. If you become overburdened with commitments, it’s virtually impossible to find the time to devote to the things that matter most to you.   And, spreading yourself too thin, whether for work or pleasure, is a surefire recipe for burnout. Saying no is a single strategy that can have endless benefits to your stress levels and well-being, including: Boosting your productivity, giving you time for rest and relaxation, eliminating distractions, improving your focus, allowing you to achieve your personal goals.

The Power of Words: How You Say No Matters

Research published in the Journal of Consumer Research shows that simply saying “no” is not the most effective strategy;1 neither is saying “I can’t.” Instead, just by changing one word you may be able to dramatically improve your success.

The word to use, according to a series of two studies? “Don’t.” The first study compared two groups of students saying either “I can’t” or “I don’t” when faced with a temptation, such as eating ice cream.   After repeating the phrases, the students were then offered a candy bar or a healthier treat when they left the study room. Those in the “I can’t” group chose the candy bar 61 percent of the time, compared to 36 percent of the time for the “I don’t” group, which suggests the change in terminology helped the students make healthier choices.

The next study was even more revealing. It involved three groups of women who focused on a long-term health goal. One group was told to “just say no” when they felt tempted to lapse on their goal, the second group was told to say “I can’t” and the third group said “I don’t.” After 10 days, the number of women who persisted with their goals was drastically different:2

And therein lies the secret to its success. As Heidi Grant Halvorson, the director of the Motivation Science Center at Columbia University, told Lifehacker:3

“‘I don’t’ is experienced as a choice, so it feels empowering. It’s an affirmation of your determination and willpower. ‘I can’t’ isn’t a choice. It’s a restriction; it’s being imposed upon you. So thinking ‘I can’t’ undermines your sense of power and personal agency.” 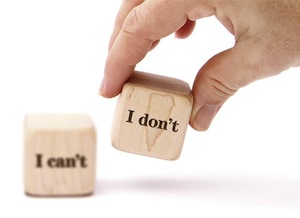 This is an incredibly powerful strategy that you can implement in your own life immediately. Erase the phrase “I can’t” from your vocabulary and replace it with “I don’t” when you’re trying to avoid potentially self-defeating habits, temptations or obligations. For instance:

You can also put a positive spin on this, which may also be empowering for you, by instead saying:

When you use empowering words like “don’t” instead of “can’t” it can help to reprogram the way you think and ultimately help you to make more positive life choices. This strategy works for short-term, immediate circumstances, such as helping you keep your schedule manageable, as well as for reaching your long-term goals. This is the power of your words!

No matter what your goal or purpose, make sure you use words that affirm your abilities and power rather than those that highlight your limitations. Lifehacker reported:4

“ …The words that you use create a feedback loop in your brain that impacts your future behaviors. For example, every time you tell yourself ‘I can’t,’ you’re creating a feedback loop that’s a reminder of your limitations. This terminology indicates that you’re forcing yourself to do something you don’t want to do. In comparison, when you tell yourself ‘I don’t,’ you’re creating a feedback loop that reminds you of your control and power over the situation. It’s a phrase that can propel you towards breaking your bad habits and following your good ones.”

By choosing your words carefully, you can, quite literally, change your outlook on life and the success you have at reaching your goals and, ultimately, living a happy life. As Leonardo da Vinci said:5 “One can have no smaller or greater mastery than mastery of oneself.”

When you’re able to effectively say no, it allows you to weed out the distractions in life that are keeping you from doing what you love. In short, it helps you keep your external focus on what matters most. A more inward, mental practice of this is mindfulness, which helps you to keep your internal focus. Practicing mindfulness means that you’re actively paying attention to the moment you’re in right now.

Rather than letting your mind wander, when you’re mindful you’re living in the moment and letting distracting thoughts pass through your mind without getting caught up in their emotional implications. In a study of college students who took either a mindfulness class or a nutrition class for two weeks, those who took the mindfulness class improved reading-comprehension test scores and working-memory capacity, as well as experienced fewer distracting thoughts.6

Mindfulness can also help to reduce stress-induced inflammation, and it’s another example of how you can harness your own sense of power and control to achieve what you want in life, similar to swapping the word “don’t” for “can’t.” Simple techniques such as the following can help you to become more mindful:7

Part of living life to the fullest is taking the time to indulge your passions and inspirations. So while it’s important to say “no” to activities that will drain your physical or emotional energy, it’s equally important to say “yes” to those that you enjoy. Writing down the things that bring you a sense of pleasure and happiness, and reviewing your list on a regular basis, can help you remember to carve out the time to do those simple activities that reinforce your belief that life is indeed good.

Dr. Mercola is an osteopathic physician, board-certified in family medicine, whose mission is to educate and provide simple, inexpensive tools to help limit or avoid expensive and potentially dangerous drugs and surgery through www.mercola.com, the most visited natural health website in the world. A New York Times best selling author, Dr. Mercola was voted an Ultimate Wellness Game Changer by the Huffington Post, and has been featured in Time magazine, LA Times, CNN, Fox News, ABC News, and the Today Show.