The Spirit of Health: Mastering the Mind/Body Interface

During the interval between the discovery of the HIV virus together with an antibody test to detect it and the discovery of antiviral drugs active against HIV, there was desperation among people with HIV who had no effective recourse. I was asked to create mind-body programs to be used at clinics in San Francisco and New York. To my amazement, the patients who showed up had never been tested for the HIV antibody. Instead they had guessed, intuited, deduced, assumed, or supposed but never fully believed that they were infected. Not being tested was a key to maintaining a foot in the world of hope because a positive test at the time was a sentence to a certain, slow, cruel death.

“Even the dream that I am HIV negative is a therapy for me,” one man told me, “because I have seen that when my friends were confirmed to be infected their disease accelerated. I don’t want to know.” At the time, a person like him was considered to be in denial and worse, a walking public hazard. Infectious disease specialists said there was no basis for their observation, that you can’t worry yourself from HIV positivity to full-blown AIDS. But I began to realize that there was some truth in their folly. As soon as zidovudine (known then as AZT) became available as the first antiviral agent against HIV, even though by itself it was mostly useless, all my putative AIDS patients rushed out to get the confirmatory tests so they could start the drug. Within weeks the T-cell counts of some of them dropped precipitously, sometimes even before they got their hands on the first dose.

Last month researchers at UCLA confirmed the link between one’s state of mind and the course of HIV infection. Men infected with the virus who were introverted, reserved and loners had eight times as many viral particles in their blood as outgoing men. The extroverted men also had a better response to therapy. After 18 months taking anti-retroviral drugs, their viral load fell 162 fold, while the withdrawn men had a drop of only 20 fold.

This study suggests that your constitution or makeup, a trait that changes, at best, extremely slowly, can influence your immune system. It has been well documented that changing mental states like depression are also linked not only with AIDS but also with cancer and osteoporosis. Researchers following 5,000 people with depression found they had twice the risk of developing cancer as people without the blues. Research going back 40 years has shown that people with high scores on indices of stressors — life-shaking events such as divorce, death of a spouse, loss of a job or even marriage — have not only more high blood pressure and heart disease but also more cancer than those with lower scores.

The interface between body and mind is a determinant not only of health but also of longevity. One of the characteristics of the eldest of the old, people over 95, is an uncanny ability to shrug off adversity such as the loss of a loved one and get on with their lives. It is important to explore this interface not only because it affects us during every waking and perhaps sleeping moment, but also because it is a portal we can access to bring about positive changes in our health, physical performance and mental well-being.

We also need to master this interface to prevent the opposite: the body holding the mind hostage, as in a panic attack. A simple sensation, “Oh, I can feel my heart beating,” sets off a chain reaction where the body now dictates the state of the mind. The next thought, “Oh, no, now I can’t breathe!” and the stricken person tries to increase airflow and feels the symptoms of lowered CO2 from hyperventilation. Next, “Oh, my face is going numb. I must be dying!” This increases the anxiety, a vicious cycle of the mind-body interface run amok.

I use the expression mind-body interface as a starting reference, but in reality there is no boundary between the two and these terms need to be restated to have a meaningful discussion. We will instead consider the terms consciousness and physiology, because they better describe the relationship between the non-manifest world of our inner experience and the physically expressed nature of our biology.

Our purpose in all this is to master the laws of nature, thus possessing the ability to choose our state of mind and permitting our body to do just what the mind dictates. This means peeking into the chapters of the owner’s manual to the human body not found in a medical library. An anatomy lesson of the mind-body interface would present a diagram showing the hierarchy of expression of the parts of our experience arising from the field of pure consciousness. Ascending sequentially from most subtle to most manifest, the mental organs that permit us to experience and cognize appear like this: 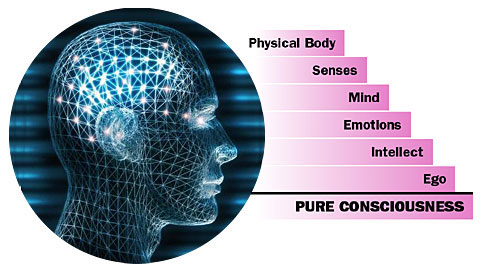 Like waves on an ocean, all the mental and physical processes above the line are the manifest expressions of the unmanifest field of pure consciousness, theocean’s silent depth. We call it “pure” consciousness because it is consciousness without its content. The workings of the mind, intellect, emotions and senses are the superficial turbulence while pure consciousness always remains the unmoving basis for mental activity.

One could similarly compare the cognitive organs in this diagram to a tree finding its roots in the earth, an apt analogy because nourishing pure consciousness through practices that put us in touch with it is the best way to cultivate the parts. Modern psychology studies the diverse expressions of consciousness above the line. Unfortunately, this is a cumbersome way to gain insight into the core of a person’s quirks and foibles.

Before attempting to fathom a complex system, scientists study its simplest model, a hydrogen atom with one proton and one electron, the metabolic pathways of a one-celled bacterium, or the simple neuron of a squid. Similarly, to understand complex human behavior such as the T-cell counts that rise and fall with one’s state of mind, we need to analyze those moments of pure consciousness. Can we analyze the moments where time stands still upon seeing a sunrise or the beauty of an innocent child? Or moments between waking and dreaming or sleeping when we are awake inside yet the mind is still? Or a moment of sudden insight, a Eureka moment where the brain reboots, discharges old ideas and resets itself using new parameters? Or a moment at a Beethoven symphony where the musicians in black lead you on an exploration of the field of possibilities of four notes, incessantly repeated in startling ways, each iteration different from the other, as you let yourself be charmed by their variation and familiarity, until your breath and your brain are simultaneously suspended?

We can indeed analyze this with the tools of research being the fabric of your nervous system. This is transcendence. You have gone beyond the mind, intellect and senses into another realm which is wakeful but still. It is not a trance. It is not flashy. Angels are not there to sing, and fireworks are not there to entertain you. The experience is just natural, simple, uncomplicated. But your problems and cares don’t exist in this field. In fact, this is where they can be dissolved.

Visiting this field of pure consciousness on a regular basis is the first exercise in gaining mastery over the mind-body interface. Spiritual practices including yoga, pranayama and especially meditation are techniques par excellence to gain familiarity with this state. Some people say pure consciousness happens during tai chi, running, writing or even drinking a beer. This may be, but these encounters with pure consciousness are less practical because the next step after having experienced pure consciousness is mastering how to think and act in this state. This requires us to be able to invoke pure consciousness at will, systematically, and in a circumstance where we can begin to cultivate it. If we want to teach our pet some new tricks we had better pick an environment without distractions.

Let’s return to our example of waves on the ocean, the thoughts, feelings, judgments, insights, desires, memories and other experiences that superimpose themselves on the silence of pure consciousness. Suppose in the midst of this quotidian chaos you have the thought, “I need to cure my asthma.” It is highly unlikely that the thought would be experienced throughout the brain because of all the surface turbulence. If you throw a boulder in a choppy sea, it’s still just so much foam. This is like trying to attempt visualization, affirmations or even prayers to improve your asthma while in an agitated state of mind without pure consciousness. The results are usually less than dramatic. But if you drop even a grain of sand into a still pond, the ripples emanate perceptibly in all directions. Perceptibly means the import of the desire touches the whole brain. Since your brain is the master organ, like the maestro of the orchestra, connected to and directing every other, it has a bully pulpit to spread your desire throughout your physiology, alerting not only your lungs, but your adrenals, gut, heart, and immune system that the wheezing has to stop.

In the state of pure consciousness, a brain impulse affects the brain in a more global manner. Prof. Nicolai Lyubimov of the Moscow Brain Research Institute found that sensory evoked potentials (faint repetitive stimulations of a finger to evoke a brain wave response) during the practice of Transcendental Meditation spread throughout both brain hemispheres, but during normal waking in the same subjects the brain responses were confined to the sensory cortex.

To gain mastery of the mind-body interface to heal our asthma (or headaches, insomnia, colitis, cancer, AIDS, etc.), we need to begin to desire from the state of pure consciousness where a whisper is appreciated more than a shout. This doesn’t mean having a less intense desire. Rather we need to learn to hold our desires ever so subtly on the finest level of feeling within a settled nervous system. This is skill in action where a mere thought can hold sway over the physiology so it collaborates with your desire for radiant health.

Jay Glaser, MD is a board-certified internist and medical director of the Lancaster Ayurveda Medical Center in Sterling, MA. More information about topics discussed in Spirit of Health and about his practice is available on his web site http://www.AyurvedaMed.com or by calling 978-422-5044.