The Wall Street Occupation — What's It Really About?

A lot of what you’ve probably seen or read about the #occupywallstreet action is wrong, especially if you’re getting it on the Internet. The action started as an idea posted online and word about it then spread and is still spreading, online. But what makes it really matter now is precisely that it is happening offline, in a physical, public space, live and in person. That’s where the occupiers are assembling the rudiments of a movement. 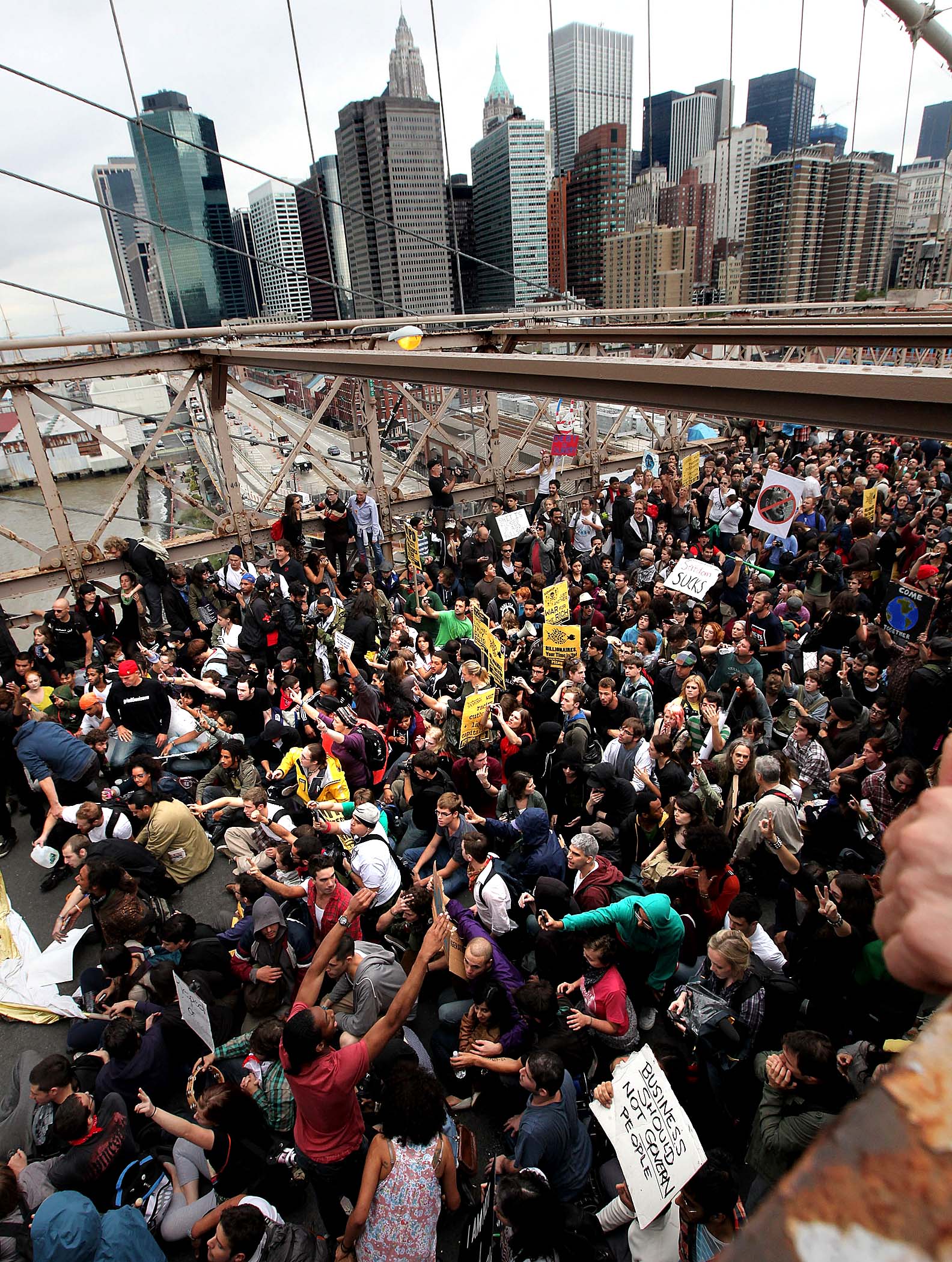 At the center of occupied Liberty Plaza, a dozen or so huddle around computers in the media area, managing a makeshift Internet hotspot, a humming generator and the (theoretically) 24-hour livestream. They can edit and post videos of arrests in no time flat, then bombard Twitter until they’re viral. But for those looking to understand even the basic facts about what is actually going on—before September 17 and since—the Internet has been as much a source of confusion as it is anything else.

For someone who has been following this movement in gestation as well as implementation, it’s painfully easy to see which news articles take their bearing entirely from a few Google searches. Some reporters come to Liberty Plaza looking for Adbusters staff, or US Day of Rage members, or conspiratorial Obama supporters, or hackers from Anonymous. They’re briefly disappointed to find none of the above. Instead, it’s a bunch of people—from round-the-clock revolutionaries, to curious tourists, to retirees, to zealous students—spending most of their time in long meetings about supplying food, conducting marches, dividing up the plaza’s limited space and what exactly they’re there to do and why. And that’s the point. More than demanding any particular policy proposal, the occupation is reminding Wall Street what real democracy looks like: a discussion among people, not a contest of money.

As is now well known, the anti-consumerist group Adbusters made a call on July 13 for an occupation of Wall Street. That and a bit of poster art were the extent of its involvement. Adbusters floated the meme and left the rest to others. The trouble was, though, that most of the others were meme floaters, too.

The occupywallst.org web domain was registered anonymously on July 14, and it soon became the main clearinghouse for information about the movement’s progress. It remains so now and is getting, on average, about 50,000 unique visitors per day. It’s maintained mainly by a man and woman who met through the Anarchism section on the web site Reddit. 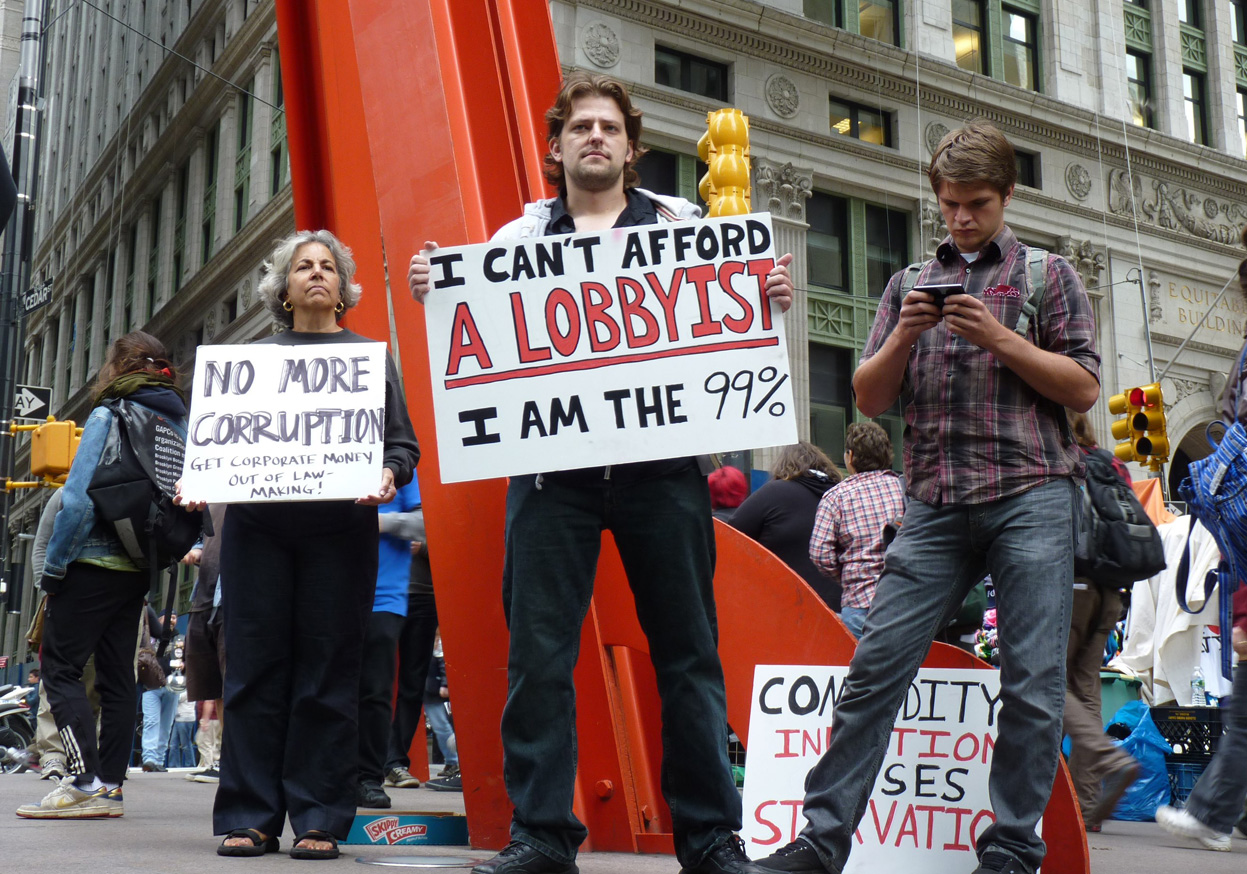 Soon came US Day of Rage, the project of Alexa O’Brien, an IT content management strategist. Since March, she has been trying to build a nationwide movement for radical campaign-finance reform—”One citizen. One dollar. One vote.”—and decided to peg her efforts to the September 17 action. While she has around 20 organizers working with her in cities around the country, as far as one leading #occupywallstreet organizer in New York could tell, it seems like her only colleagues might be coffee and cigarettes.

Then, of course, there’s Anonymous. The most-wanted hacker-activist collective indicated that it would join #occupywallstreet in late August. Within days, the Anons’ presence in the movement was being felt through Anonymous-branded viral videos, the bombardment of the movement’s Twitter hashtags (of which there is an ever-growing number) and rumors of scrutiny from Homeland Security.

Meanwhile, quietly, a group of several hundred mainly young activists, artists and students started gathering as a “General Assembly” (GA)—a leaderless, consensus-based decision-making process. They met weekly in public parks, starting on August 2 and continuing until the occupation began, with the intention of building an  organizational and tactical framework for the action. It grew out of New Yorkers Against Budget Cuts, which had recently held a three-week occupation near City Hall called “Bloombergville” to protest against austerity measures. They had learned a lot from that and were ready to try something bigger.

The GA formed an Internet Committee, which quickly became fraught with infighting about process, security concerns and editorial control. These problems consumed hours and hours of the whole Assembly’s time. Their site went up, then down and then finally up again just days before the occupation began. It is now online at nycga.cc, but it receives only a small fraction of the traffic of occupywallst.org. Only on Thursday afternoon did the two sites figure out how to formally coordinate their activities.

As a result of these hiccups, in the lead-up and early days of the occupation, media coverage almost always associated it with meme floaters like Adbusters, US Day of Rage and Anonymous. But none of them were especially responsible for what would be happening on the ground starting on September 17. That was the GA’s doing.

Others, it seems, have taken it upon themselves to fill the GA’s media vacuum of their own accord. One document being circulated and discussed online is “Occupy Wall Street—Official Demands,” dated September 20 of 2013, which includes detailed proposals for reforming the financial system, none of which has been approved by the GA.

“This is definitely not ours,” says Marisa Holmes, a facilitator of the GA since the first planning meetings. “All decisions made by the GA are made in this space.”

Worse, thanks to some imaginative theorizing by Aaron Kein of the right-wing online publication WorldNetDaily, the idea began circulating that the movement was “closely tied” with ACORN, SEIU and that it took its inspiration from the Weather Underground; George Soros; and, ultimately, President Obama himself. Five minutes at a GA meeting would easily disabuse one of such associations. The GA had no official organizational ties and, besides a food fund that has been stuck in an inaccessible WePay account, almost no money. Many wish that they had the support of unions, but so far they still don’t. 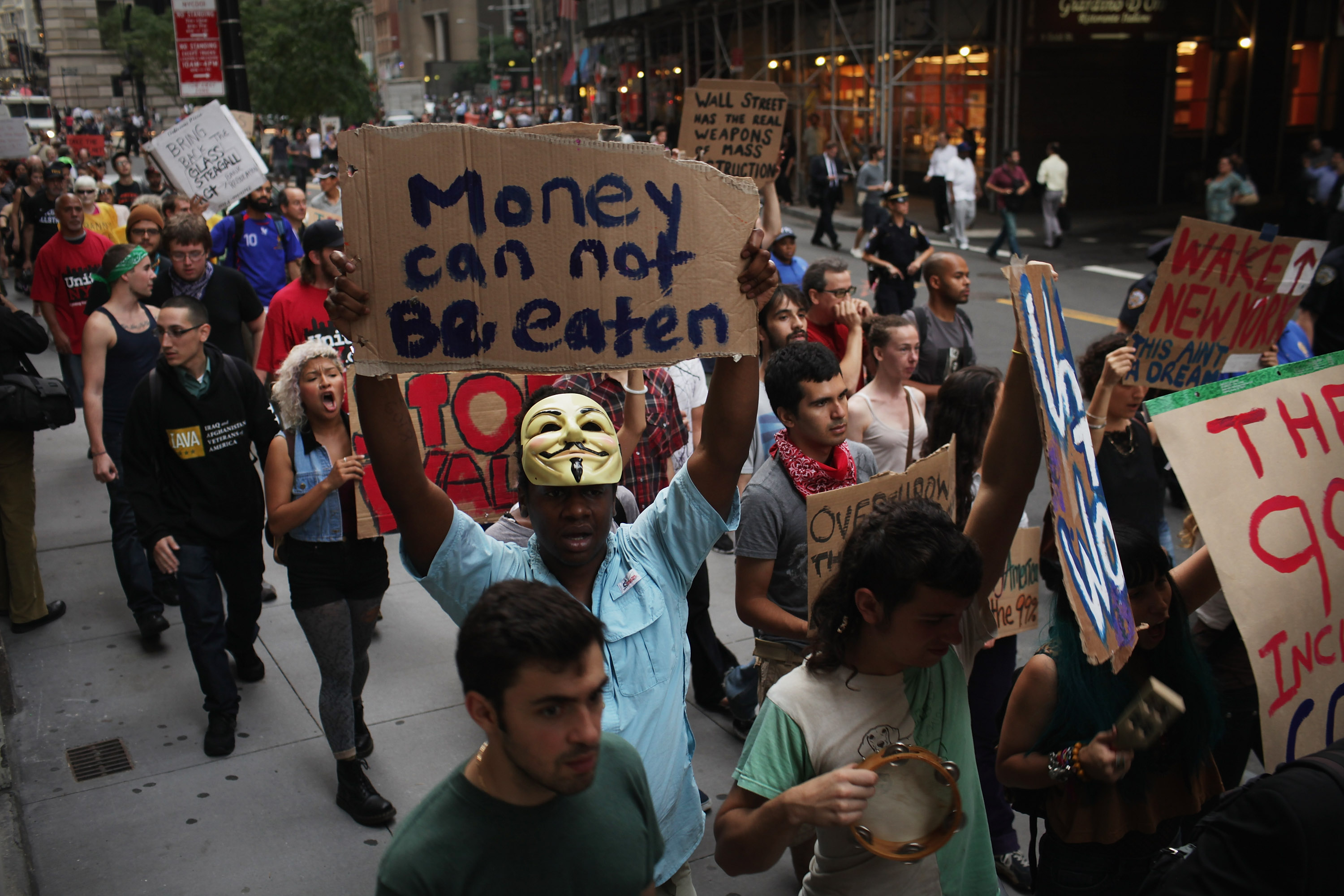 What’s actually underway at Liberty Plaza is both simpler and more complicated: music making, sign drawing, talking, organizing, eating, marching, standoffs with police and (not enough) sleeping. It’s a movement in formation. As protesters sometimes like to chant, “This Is Just Practice.” There are a handful of guys with Anonymous Guy Fawkes masks backward on their heads, but they’re just one affinity group among many. O’Brien didn’t appear on the plaza for a couple of days—she was “running the back-end,” she says—and there has been almost no talk of “One citizen. One dollar. One vote.” Adbusters sends the occasional package of posters in the mail and offers confusing advice to organizers on the ground. Nobody’s exactly sure yet who is doing what, but they’re learning.

For the most part, the occupation is riding the momentum started in the GA meetings that were going on for a month and a half beforehand. They built a community of people who trust each other, who have a sense for each other’s skills and who are in some basic agreement about ends and means.

In the revolutions and uprisings and occupations that have been taking place around the world since the beginning of this year, there has been a lot of talk about the mobilizing power of social media—of the Twitters and Facebooks and cell phones. But when the Egyptian government shut down the Internet and the cellular signals in January, the movement there carried on. One of the deciding factors that brought down Mubarak, in the end, was not some Twitter hashtag, but a general strike organized by traditional labor unions. The Internet can help (as well as hurt) a movement, but it’s no replacement for actual relationships among actual people, building actual trust through actually working together over a period of time.

“I could have a political discussion just on the Internet,” says web developer Drew Hornbein, who is on the GA’s Internet Committee, “but it’s nice to get out like this.” When he started attending GA meetings in August, he got excited, thinking, “This is something really real. This could really be something.”

So it has become. But everyone at Liberty Plaza knows the movement has to be bigger for it to have the effect they want to see. Whole swaths of Americans—from racial minorities to disgruntled Wall Streeters—are underrepresented among the occupiers. Not everyone, it seems, is quite so glued to Twitter as the young radical set. They’ve had to start scrambling to relearn how to make fliers, reach out to membership organizations and find people where they are to make the movement’s numbers grow.

On Thursday evening, a surprise march of hundreds mourning the execution of Troy Davis in Georgia set out for Liberty Plaza from Union Square, led by occupiers. Police made attempts to stop it with barricades and clubs and arrests, but they couldn’t; and when the marchers arrived, the numbers in the plaza swelled. There were a lot of new faces and new kinds of faces. It paid off to quit the Internet, go to where people actually are and bring them back.

In the GA that night, Ted Actie, who lives in Brooklyn and works for On the Spot, a minority-owned talk-show production company, called on the protesters to speak more directly to the communities around them. “You do so much social networking,” he said, “you forget how to socialize.”

Nathan Schneider is an editor of Waging Nonviolence. He writes about religion, reason, and violence for publications including The Nation, The New York Times, The Boston Globe, Commonweal, Religion Dispatches, AlterNet, and Truthout, where this article first appeared.. He is also an editor at Killing the Buddha. Visit his website at TheRowBoat.com.