This Library Takes An Indigenous Approach To Categorizing Books

For more than a century, the Dewey Decimal Classification system has dictated the way libraries organize their collections. And the way they organize and sort information says a lot about what kind of information is prioritized—and what’s left out.

Books on Indigenous communities often get looped into the history section. As a result, information on Native peoples literally gets left in the past.

X̱wi7x̱wa Library (pronounced whei-wha) at the University of British Columbia in Vancouver, Canada, is working to change that. The library aims to counter Western, colonial bias and better reflect the knowledge of Indigenous peoples. By offering an alternative to the widely used Dewey Decimal and Library of Congress classification systems, this library aims to take steps toward decolonizing the way information is sorted, cataloged, and shared.

Amy Parent, a 2014 graduate of UBC and member of the Nisga’a Nation, used X̱wi7x̱wa to conduct research as a graduate student studying Indigenous education. But it was the librarians’ efforts to reach out and get to know their library’s visitors that stood out to Parent.

“They are very much aligned with the way we form relationships with our communities,” Parent said. Parent said the librarians at X̱wi7x̱wa get to know visitors on a physical, emotional, mental, and spiritual level.

X̱wi7x̱wa librarians ask about visitors’ families, they help visitors establish connections with other X̱wi7x̱wa users, and they attend UBC’s Indigenous events to make connections with more students. They also ask about a visitor’s interests so librarians can help in research; Parent said they’d often put aside materials they thought she’d be interested in.

Sandy Littletree, an Indigenous librarian and researcher of Indigenous knowledge, remembers first experiencing bias in Western libraries while an undergraduate at New Mexico State University. At the time, Littletree planned to focus her studies on adult literacy with a focus in Native American education. But when she searched her library’s database for books on the topic, she couldn’t find anything.

When Littletree later began studying librarianship in graduate school, she found subject headings were part of the issue. Subject headings sort Native topics into the history-related sections of the DDC. As a result, Native peoples are treated as historic artifacts instead of a living group of people with present-day struggles.

Additionally, mainstream library systems reflect Western methods of sorting information, rather than Indigenous methods. Canadian First Nations libraries organize information on Indigenous communities geographically according to region, Littletree said, reflecting a sense of place. Systems like the DDC and Library of Congress, on the other hand, sort according to alphabetical order.

“The systems are not really designed with our language and our behavior for research.”

“The systems are not really designed with our language and our behavior for research,” Littletree said. On top of differing categorization methods, she said, the systems also can’t easily incorporate Native American languages that use non-Roman characters in the spelling of certain words.

Western bias also plays a role in the way Indigenous literature gets shelved. Native American creation stories get sorted with folklore or fairytales, for example, while biblical tales are in the nonfiction section.

Practices like these reinforce colonial cultural traditions while undermining Native culture. “Those subtle messages can be picked up by Native people,” Littletree said.

The system incorporates Indigenous perspectives when categorizing books. One of the most important ways it does this, said acting head librarian at X̱wi7x̱wa Adolfo Tarango, is by using subject headings that reflect a tribe’s preferred name.

“Westerners use their labels, so it makes tribes invisible,” Tarango said. “This is a way of reestablishing identity and saying these are our names and these our people.”

By using Indigenous names and with Indigenous librarians on staff, X̱wi7x̱wa is able to provide a resource that organizes information in a way to which Indigenous students are more accustomed. 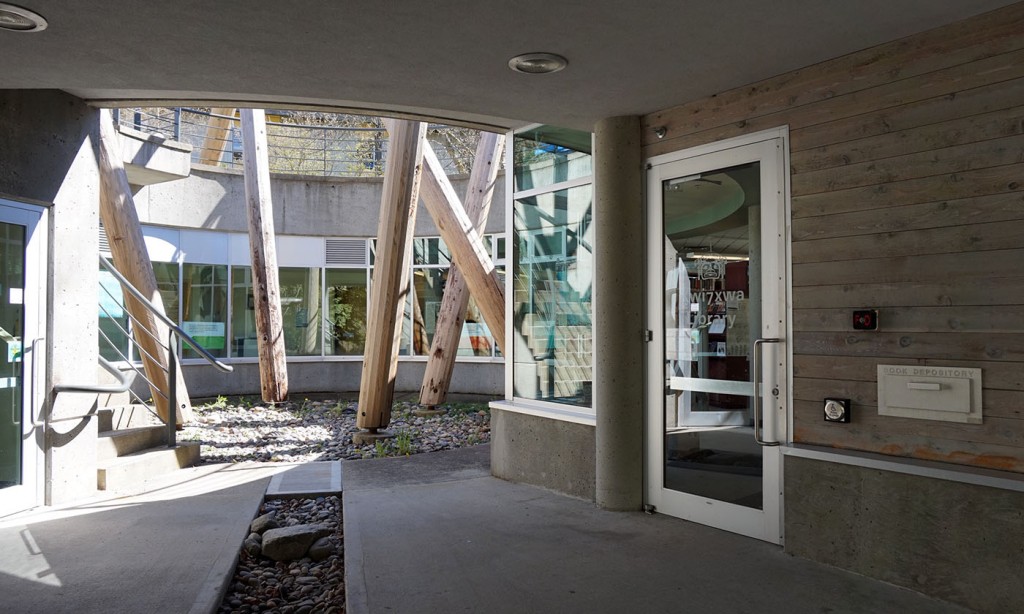 The entrance to Xwi7xwa Library. Photo by Jessica Woolman.

“The more ways you look at things, the more understanding you have,” Tarango said. “I think that’s a really promising thing for non-Indigenous communities.”

In fact, that’s what Tarango and his co-workers at X̱wi7x̱wa consider to be the most important part about the library. As the UBC community grows, so does the opportunity for developing a more inclusive categorization system. That means raising awareness about bias and incorporating input from the non-Indigenous community into the way the library operates.

Rather than shelving books alphabetically, X̱wi7x̱wa organizes their collection by geographic location. Books on coastal nations are grouped in one section, while information on northern nations are in another.

Kim Lawson, a X̱wi7x̱wa librarian in charge of community outreach, said this aspect of X̱wi7x̱wa not only helps students find specific information on tribes, but it emphasizes the importance Native communities put on the connection to a place.

“It makes research easier, but informally, it also teaches,” Lawson said. She said X̱wi7x̱wa’s categorization system makes it easier for the UBC community to connect with the many different tribes in British Columbia, as well as tribes from other North American regions.

Tarango said the struggle is educating non-Indigenous students on how libraries’ use of Western subject headings and categorization methods negatively impact Native peoples.

“Part of the challenge is to articulate the need to those people who aren’t aware and hopefully get their buy-in that these are issues that need to be addressed,” Tarango said.

And alternatives to mainstream categorization systems can only do so much to address colonial bias.

Littletree said books usually come into a library with a subject heading predetermined by the publisher. Even if a library is stocked with literature about Indigenous communities, the cultural depictions in these works may not be accurate.

Ultimately, library systems support “historical institutions and Western educations and contemporary state governments,” at least to some extent, said Lawson. That’s because the publication industry, classification systems like the DDC and Library of Congress, and libraries themselves are all ultimately rooted in colonial ways of generating knowledge, she said.

Despite the limitations, Lawson and Tarango remain positive that a resource like X̱wi7x̱wa can generate productive conversations.

X̱wi7x̱wa has a section of the library dedicated to the books filled with harmful stereotypes and false information about Indigenous communities. Parent refers to it as the “yuck shelf.”

The librarians not only want to keep these books out of the rest of X̱wi7x̱wa’s collections, but provide an opportunity to explain to non-Indigenous folks why such material perpetuates stereotypes.

And Parent sees this shelf as important in teaching non-Native students to critically analyze common misinformation about Indigenous culture.

Tarango said that people are becoming more aware of the problem with mainstream categorization systems. And at the end of the day, that’s all that the librarians at X̱wi7x̱wa can hope for.

“I think we are in a very opportune moment where a … broader discussion [can] happen,” he said.

And for former students like Parent, X̱wi7x̱wa continues to serve as an important resource. Today, Parent teaches Indigenous studies at Simon Fraser University. She often sends her students to X̱wi7x̱wa for research. The library is helping correct decades of inaccurate information circulated in mainstream libraries, she said.

The library’s Indigenous approach to categorization and relationship building with students makes it a beloved source of community for British Columbia’s Indigenous people.

“Going to X̱wi7x̱wa can be similar to the way you visit folks in Indigenous communities,” Parent said. “Sometimes you stay for tea and a baked good.

Sydney Worth is a journalist and former solutions reporting intern for YES!