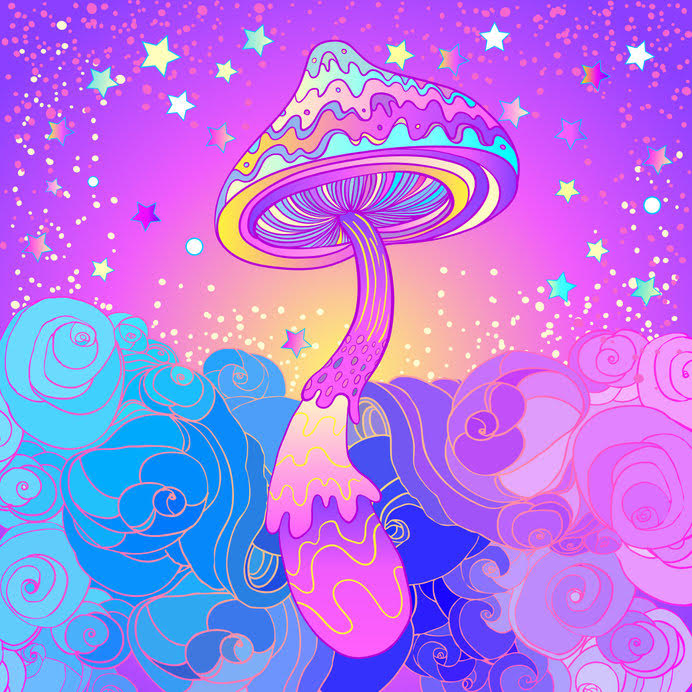 My first post graduate internship was at a state mental hospital where people were still being wet-sheeted, and electroshock therapy was considered a good option for behavioral control. The treatments, (including what are now considered very primitive drugs) were given for psychosis, depression or anxiety, were often worse than the cure. We used to call the patients “gorked”—they were zombie-like, unable to do any but the simplest of activities. If it was a slow day, we would take trips to the basement “torture chamber” where there were an assortment of tools, and chains anchored to the walls. Yikes!

So it was surprising for me to see an emerging trend toward psychotropic-assisted therapies being embraced by allopathic medicine. The recreational drugs of rich kids and spiritual seekers are now being considered as possible aids to mental health. Amphetamines for attention deficit disorder? Psychotropics for PTSD? Would we create an alternate reality they might never crawl out of?

But lo, the Age of Aquarius saw folks that achieved clarity and better health through the use of things like LSD and mind-altering mushrooms. Some were able to get perspective on their lives and understand and contextualize life’s little problems and contemplate lofty ideas. If it impacted the brain’s chemistry could this work with severe mental health issues? Wouldn’t it be better to have someone who could manage to function— even if at a low level— than someone who is in terrible emotional pain? And how do we get an accurate picture of the risks? What do we do for folks who have not responded to many different drugs, techniques and programs?

There were always other options out of the mainstream path of drugs and long-term therapy. Many open-minded therapists tried such things as herbal medicine, gestalt therapy, primal scream, meditation, religious retreat, healthy lifestyle— but there are always folks who just don’t get better enough to have a decent quality of life.

I think it’s important to first define what we mean by psychotropics. Many drugs have been prescribed over time that affect a patient’s mental state and their perception of reality. But are they psychotropic? Ritalin and its kin are not psychotropic drugs. In certain cases, they allow people with brain wiring issues to better “connect their circuits”: they sharpen perception rather than create visions— so not psychotropic. Antidepressants and anti-anxiety meds are not psychotropic. Most western medicines with the exclusion of some pain meds and some anesthesia are not intended to alter reality, hence, not psychotropic.

Back in the 50s and 60s there was much interest in using psychotropic drugs for all sorts of mental illness. But therapeutic use of psychotropics is very hard to control. Practitioners were often not trained in how to create a safe environment, and there was no consensus of what a reasonable dosage would be: would it be based on gender, or weight, or age?

Plus this type of work is extremely time consuming, usually requiring several sessions with more than one person supervising. If there is a bad reaction, there must be substances on hand that will immediately counteract whatever is administered. Because of these factors, and a bunch of political and social stuff that happened, the practice and research, fell out of favor.

Over the past 60 or so years, Big Pharma made it much easier and less complicated to simply come up with pharmaceuticals that were more of a “one size fits all.” So everyone with depression got a particular category of drug, and others— say with anxiety— a different category of drug.

Look at, for example, the plethora of drugs that are SSRIs, or serotonin reuptake inhibitors. Serotonin affects mood and certainly affects depression; this class of drugs has been widely used for many years and is produced by several drug companies in slightly different formulations. Likewise, for anxiety we have relied on benzodiazepines and similar drugs to calm people down. But we have had very little that is effective in dealing with other types of psychological disorders. People with schizoaffective disorder, for example, may end up so sedated that we don’t know whether what they’re taking is working, or they’re just too “gorked” to behave abnormally.

In our “just give them a pill” culture, it’s been a lot easier to use standardized, dosage-based, home-administered substances. I am in no way indicating that many people do not benefit from mental health drugs, talk therapy and other methods of treatment. I would not be where I am without lots of talk therapy over the years.

There is a growing trend in Western medical mental health treatment using heretofore “forbidden” substances in an attempt to get better therapeutic results. The number of clinical trials has increased dramatically. Consider the following: 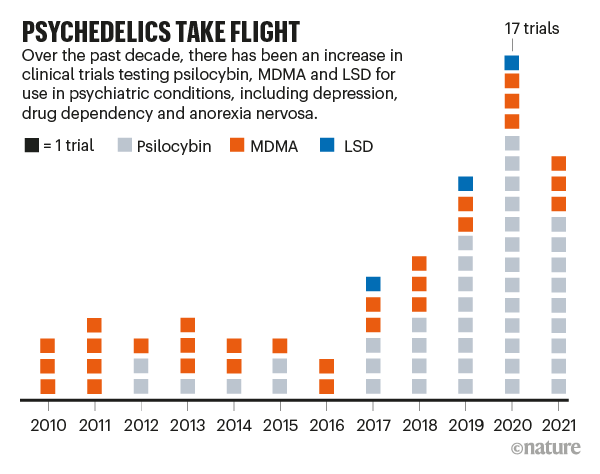 The studies show similarities in how brains respond to psychedelics such as psilocybin and LSD, as well as to N,N-dimethyltryptamine (DMT), the active ingredient in ayahuasca, and to mescaline, a psychedelic compound derived from the peyote cactus. They all act on receptors for serotonin, a neurotransmitter that affects mood.” From the journal Nature, January 27, 2021. Paul Tullis

As a shaman and a mental health practitioner, I have taken part in many ceremonies where drugs were taken, including nicotine, mushrooms and other substances that create an altered state of mind. But those experiences were always in a very controlled ceremonial environment. Participants did have terrific insights and new ways of learning, but a senior experienced guide was always with them. Whether you call that person a shaman or a psychiatrist can be a matter of context.

If we are to journey to the land of psychotropic drugs, we need to do it in a way that is safe, takes time, and requires practitioners to have significant training. My fear is that we will jump on the psychotropic bandwagon without the necessary safety measures put in place. Perhaps shamans and traditional medicine folks could teach psychiatrists, psychologists and other practitioners the methods they use to keep people safe during a spiritual journey. We have thousands of years of experience doing this. But I find it a little difficult to conceive of Blue Cross/Blue Shield approving 14 hours and three practitioners for a treatment that they could claim would be treated by a three dollar pill.

Yet it is a new and exciting frontier, a new take on the old attempts. I‘m all for returning to a traditional method of shamanic healing for spiritual and mental health issues, judiciously through the use of mind-altering psychotropic drugs in a controlled environment. I will be very curious to see how this evolves over time.

Wendy Marks is a Medical Intuitive and Rehabilitation Counselor with thirty years of practice in traditional and complementary health therapies. Sign up here for Wendy’s email blog.