To Curb Climate Change, We Need To Protect And Expand US Forests

To slow climate change, we need to rapidly reduce global emissions from fossil fuels, biofuels, deforestation and wetland and agricultural soils. We need to also accelerate the removal of carbon dioxide that is already in the atmosphere.

In a new report published by the nonprofit Dogwood Alliance, my co-author Danna Smith and I show that we have a major opportunity to make progress on climate change by restoring degraded U.S. forests and soils. If we reduce logging and unsustainable uses of wood, we can increase the rate at which our forests remove carbon dioxide from the atmosphere and ensure that it will remain stored in healthy forests.

At the 2015 Paris climate conference, the United States and 196 other nations agreed to combat climate change by cutting their greenhouse gas emissions. The Paris Agreement recognizes that forests play an important role in meeting climate goals by removing carbon dioxide from the atmosphere and storing carbon in trees and soils. But the agreement calls for steps only to protect and restore tropical forests.

These forests clearly are important. They hold such enormous amounts of carbon that if they were a country, their emissions from logging and forest clearing would rank them as the world’s third-largest source, behind China and the United States.

But these activities are also having a serious and little-recognized impact in the United States. Net U.S. forest growth each year removes an amount of carbon dioxide from the atmosphere equal to 11 to 13 percent of our fossil fuel emissions. This is only about half of the average carbon uptake by forests worldwide. In other words, U.S. forests are much less effective at capturing and storing carbon relative to our fossil fuel emissions than forests globally.

The greatest contribution to this gap is logging. We are cutting trees in the United States at a rate that has reduced the carbon storage potential of U.S. forests by 42 percent of its potential. Recent satellite images show that the southeastern United States has the highest forest disturbance rate in the world.

Environmental impacts of the wood pellet industry in the southeastern United States.

When European settlers arrived at the start of the 17th century, forests covered much of the eastern and northern portion of North America. By the late 1800s, 85 to 90 percent of these forests had been cut. Only about 1 percent of original intact old-growth forest remains in the lower 48 states. Regrowth now covers 62 percent of areas that originally were forested, and commercial tree plantations cover an additional 8 percent.

Tree plantations grow rapidly but are harvested frequently and retain very little soil carbon and are harvested more frequently. As a result, they store less carbon than natural forests.

And we are still logging our forests at a significant rate. According to recent studies, timber harvesting in U.S. forests currently releases more carbon dioxide annually than fossil fuel emissions from the residential and commercial sectors combined.

These harvests support a large wood and paper products industry. The United States produces about 28 percent of the world’s wood pulp and 17 percent of timber logs – more than any other country in the world. It is also the leading producer of wood pellets and wood chips for the growing forest bioenergy sector (burning wood in various forms for energy) at home and abroad.

Wood Energy Is Not Low-Carbon

Forest bioenergy is widely considered to be a renewable fuel source, because new trees can grow – albeit slowly – to replace those that are consumed. But it is not a low-carbon energy source. Bioenergy produces about as much carbon as coal per unit of heat released. Burning wood in power plants to generate electricity is typically 50 percent more carbon-intensive than coal-fired generation per unit of electricity produced.

But proponents assert that forest bioenergy is carbon-neutral because new tree growth, somewhere now or in the future, removes carbon dioxide from the atmosphere and “offsets” carbon emissions when biofuels are burned. Although the Intergovernmental Panel on Climate Change has stated clearly that bioenergy is as carbon-intensive as fossil fuels, the European Union and many U.S. states classify biomass as a zero-carbon energy source like wind and solar power. 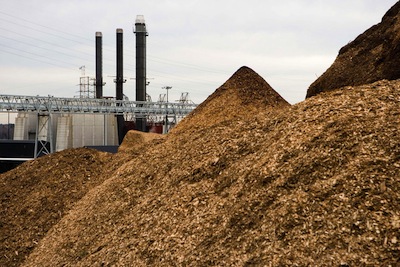 Today 60 percent of the European Union’s renewable energy comes from bioenergy. Notably, the United Kingdom is ending its use of coal for electricity, but is replacing coal with wood pellets imported from the southeast United States.

Needless to say, it does not make economic sense to import eight million tons of wood pellets yearly across the Atlantic Ocean. However, the British government has provided over $1 billion in annual subsidies to utilities to pay the cost of pellet production and transport.

Moreover, under climate accounting rules, emissions from burning wood for energy are counted as coming from land use change — that is, harvesting trees. This means that the United Kingdom is outsourcing carbon emissions from its wood-fired power plants to the United States. And the U.S. forest products industry and U.K. power companies are profiting from activities that have serious harmful impacts on Earth’s climate.

The Value Of Standing Forests

To make forests part of our climate strategy, we need a carbon accounting system that accurately reflects flows of carbon between the biosphere and the atmosphere. Bioenergy emissions should be counted as coming from energy production, rather than as a land use change.

We also must manage our forest systems on a sound ecological basis rather than as an economic growth-oriented business, and value the multiple ecosystem services that forests provide. One way to do this would be to pay landowners for maintaining standing forests instead of only subsidizing logging for timber, fiber or fuel. We cannot log and burn our way to a low-carbon, stable climate future.

How To Get Your Kids Excited About Protecting The Environment

Too Much Social Media Can Be Damaging To Mental Health

Opposed to the Leo Sun, the Full Moon in Aquarius is exact a minute before noon. Both astrological lights are locked in testing square angles with Uranus, the egalitarian planet behind revolutionary movements and unexpected events…

END_OF_DOCUMENT_TOKEN_TO_BE_REPLACED

3 Simple Poses For Peace And Calm

Not All Belly Fat Is Fat