Why US Communities Should Be Designing Parks For Older Adults

As America grays, healthy aging becomes essential. Physical activity or exercise is an important piece of this. Getting regular exercise of just 150 minutes of moderate physical activity per week has been linked to a reduction in heart disease, cancer, falls and cognitive impairment due to dementia, including Alzheimer-type dementia.

The physical environment of where a person lives has been shown to influence how much physical activity they get. This is especially important for the rising number of older people in the U.S.

Parks are an important public health resource in our country, connecting Americans to nature, providing access to physical activity opportunities, and serving as a safe space for making social connections. With the 100th anniversary of the National Park Service in 2016, national parks received a great deal of attention.

While national parks are great assets to our nation, they tend to be located far from most Americans, limiting their day-to-day use. The same is true of state parks. Even though they are more abundant, state parks often require a longer drive than most people can make on a daily basis.

Community parks offer most Americans the opportunity to be active daily, but a study of 75 American cities found that just under 10 percent of total landmass was devoted to city parks.

Despite the many benefits of public parks, few American older adults take advantage of them. In a recent review we conducted of observational studies in parks, the median percentage of older adults in parks was only 5 percent. Our studies in Chicago, Tampa and Honolulu showed that almost all neighborhood parks in these cities had basketball courts, playgrounds, baseball diamonds and other open fields for soccer and other team sports.

An assessment from the Trust for Public Lands found that playgrounds, tennis court and ball grounds accounted for over 60 percent of city park facilities in the U.S., which reflects a bias toward the young.

But with about 15 percent of the population currently being over age 65, we need to rethink how we design parks so that they offer space for older people, too. As the number of seniors is expected to increase to one in four by 2060, I’ll explain why it’s important to keep them in mind.

The lack of older adults in U.S. parks didn’t really strike me until we decided to conduct a similar study in China.

As I walked through the park in an old industrial city called Nanchang, it looked totally different from our American parks. There was a large lake with a stream flowing through the park, numerous bridges, exercise stations and small grottoes where impromptu exercise classes were being held.

The users were different, too. The park was teeming with older adults, with almost no teenagers in sight. As I visited three other parks on that trip, I knew we were about to discover some major differences.

When we analyzed the data from eight city parks and over 70,000 people in Chinese parks, we found over 50 percent of park users were older adults. We also found a study from Taiwan using the same methods that found a similar number of older adults.

In Nanchang, China, parks had walking trails, adult-oriented fitness machines, exercise pavilions and water features. Surprisingly, these parks did not have basketball courts, ball fields, and other teen-centric amenities.

We found that the amenities affect the users. Only 3 percent of the people found in the Chinese parks were teenagers. A recent study conducted in parks in Hong Kong, a city with strong Eastern and Western influences, found exercise equipment along with playgrounds and ball fields. In Hong Kong, about a quarter of the users were older adults. 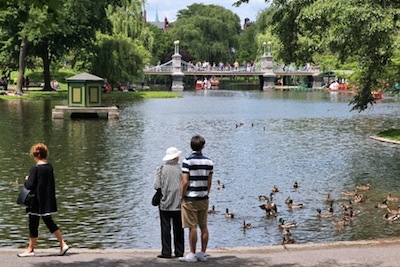 It is still not clear why older adults seldom use public parks in the U.S. It might be a lack of features that interest them. It might be safety, with numerous teenagers using the park, or it might be transportation, or another issue altogether. This is an important issue for researchers to assess to help more adults be physically active.

So how did parks in the U.S. come to be built this way?

Surprisingly, early parks in the U.S. were built more like Chinese parks. Boston Common, the first city park in America, was opened in 1634 and includes water features, walking paths and landscaping.

In the 1700s and 1800s, dozens of parks were created in major cities across the U.S., including the National Mall in Washington, D.C. and Central Park in New York City. These parks were designed to be pastoral, where nature was present but in a tamed environment.

In the early 1900s, the Progressive movement changed parks to focus more on children’s activities, including playgrounds. We are still feeling these effects today.

As we build our parks of tomorrow, we need to consider all users and construct parks that encourage activity throughout the lifespan. Hopefully, we can design parks with the best of American and Asian influences to create a more active and healthier America.

Dr. Maddock is the Dean of the School of Public Health at Texas A&M University. He is internationally recognized for his research in social ecological approaches to increasing physical activity. He has served as principal investigator on over $18 million in extramural funding and authored over 100 scientific articles.