3 Reasons Why A Meat Tax Is A Good Idea

Like cigarettes, alcohol and gasoline, meat should be federally taxed to help pay for its health and environmental costs.

A new analysis from the investor network Farm Animal Investment Risk and Return (FAIRR) Initiative argues that meat is going down the same road as tobacco, carbon emissions and sugar toward a “sin tax”—a levy intended to reduce consumption of products that are harmful. Such an excise tax on meat would help cover the health and environmental costs that result from using animals for food.

Cigarettes, alcohol and gasoline are already federally taxed to help pay for their hidden health or environmental costs. In 2014, Berkeley, California, passed a soda tax, and it has been working. Researchers of the tax found that just one year after the tax started, sales of sugar-sweetened drinks fell by nearly 10 percent, while sales of water increased by about 16 percent.

But while meat consumption is a known health hazard, and meat production is a leading source of environmental degradation, the meat industry has gotten off easy.

Why Congress Should Support A Sin Tax On Meat

According to the American Dietetic Association, vegetarians are less prone to heart disease, diabetes and cancer than meat-eaters are and also less likely to be obese.

The production of meat is also a leading cause of climate change, a looming environmental disaster that threatens the U.S. with billions of dollars in damages from rising sea levels, worsening storms and increased droughts.

Here are three reasons why a meat tax is a good idea.

1. A meat tax is good for public health.

The U.S. spends more on health care than any other nation and is one of the largest consumers of meat. Animal products are the only dietary sources of cholesterol and are by far the largest sources of saturated fat in American diets.

Numerous studies have linked the consumption of animal flesh to cancer. A major Harvard study found that people who frequently eat chicken cooked without the skin (supposedly the healthier way to prepare chicken) were 52 percent more likely to develop bladder cancer than people who don’t eat chicken.

An analysis recently published in JAMA Internal Medicine found that, based on 32 observational studies, meat-eaters have significantly higher blood pressure than people who avoid meat.

It doesn’t make sense that the millions of meat-free Americans have to help pick up the tab (through taxes and health insurance premiums) when meat-eaters get sick. A tax on meat would make the tax system more equitable—similar “sin” taxes already exist for alcohol and cigarettes.

2. A meat tax is good for the environment.

Scientists and world leaders increasingly agree that climate change is the biggest challenge humanity faces, and the meat industry is one of the world’s leading causes of it. As the Guardian reports,

“Food production causes a quarter of all the greenhouse gas emissions that are driving global warming, largely from the raising of cattle and other livestock.”

According to an Oxford University study, surcharges of 40 percent on beef and 20 percent on milk would account for the damage their production causes people via climate change.

“It is clear that if we don’t do something about the emissions from our food system, we have no chance of limiting climate change below 2C, said lead author Marco Springmann of the Oxford Martin Program on the Future of Food. "But if you’d have to pay 40 percent more for your steak, you might choose to have it once a week instead of twice.”

The researchers concluded that increasing the price of beef by 40 percent would lead to a 13 percent drop in consumption.

Unless people dramatically reduce their consumption of animal products, we won’t be able to make a meaningful dent in the climate crisis. A tax on meat could quickly and dramatically decrease meat consumption and help save the planet.

3. A meat tax is good for animals.

On today’s massive factory farms, animals are abused in horrible ways. Cows, pigs, chickens, and turkeys are routinely mutilated without any painkillers and confined to filthy cages, sheds, or feedlots for their entire lives.

Fish are crowded into massive, filthy tanks in which parasites run rampant.

In the poorly regulated slaughterhouses of the U.S., billions of animals routinely have their throats cut while they’re still conscious, and millions are scalded to death in tanks of hot water every year.

Animals are paying a terrible price to supply society with meat. 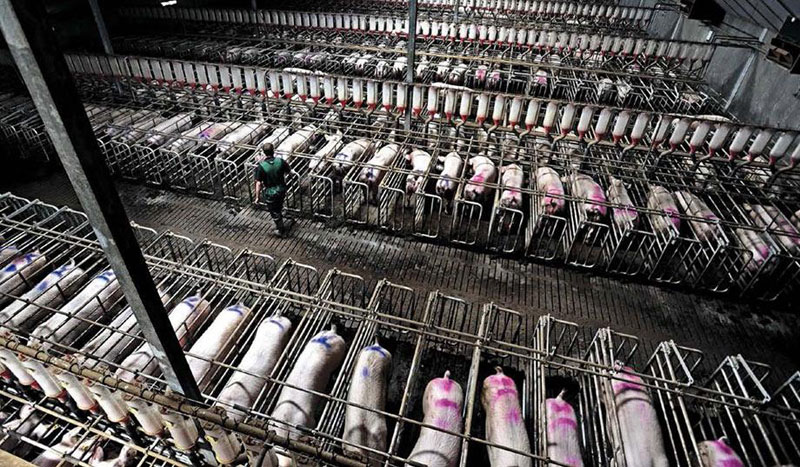 What Will This Proposal Cost The Average American?

A typical meat-eating family of four might pay only about $5 per month, and a chunk of that would likely be absorbed by the largest meat-producing companies. If the family members replaced some meat with healthy vegan foods, they would likely save hundreds or thousands of dollars in medical expenses over time as their health improved.

Of course, a vegetarian or vegan family would not have to pay the tax at all.

Will Farmers And Ranchers Lose Their Jobs?

Corporate animal factories have largely replaced family farms, and machines have replaced many employees at these facilities. The jobs that remain are extremely dangerous, and the workers who fill them (usually immigrants) are often exploited and treated poorly.

Human Rights Watch conducted a major study of working conditions in the industry and concluded:

“Meatpacking is the most dangerous factory job in America….Nearly every worker interviewed for this report bore physical signs of a serious injury suffered from working in a meat or poultry plant….Every country has its horrors, and this industry is one of the horrors in the United States.”

Is This Proposal Politically Feasible?

Yes. Although the tobacco and alcohol lobbies have enormous political influence, taxes on cigarettes and alcohol have increased. Now, it is time to protect consumers and the environment from the negative impact of meat production and consumption.

The Oxford researchers said that these taxes on meat and dairy would reduce consumption, which would reduce greenhouse emissions, health issues and animal suffering arising from consumption of these foods.

A tax on meat is a good idea whose time has come.

Ben Williamson is the Media Director for PETA.

This article was republished from Alternet.