The trend of cities renaming Columbus Day to Indigenous Peoples' Day is spreading across the United States.

Berkeley, California, was the first city to do so in 1992. Seattle and Minneapolis followed its lead in October 2014, generating the movement's current momentum. Since then, seven more cities — including Lawrence, Kansas, on Tuesday, and Portland, Oregon, on Wednesday — and one county in Texas, as of Tuesday, have joined their ranks.

Activists campaigning for the change are fighting for a history in which Christopher Columbus, who the day conventionally commemorates, is not painted as a bold explorer to be celebrated, but rather as a war criminal who oversaw the genocide and enslavement of the Native American population.

"Learning about the history of Columbus and transforming this day into a celebration of indigenous people and a celebration of social justice … allows us to make a connection between this painful history and the ongoing marginalization, discrimination, and poverty that indigenous communities face to this day," Seattle City Councilmember Kshama Sawant said after the city voted to change the day's name in 2014.

Since the campaign to change the day gained momentum, people have taken to social media to share their feelings on Columbus and the government's decision to designate a day to him. 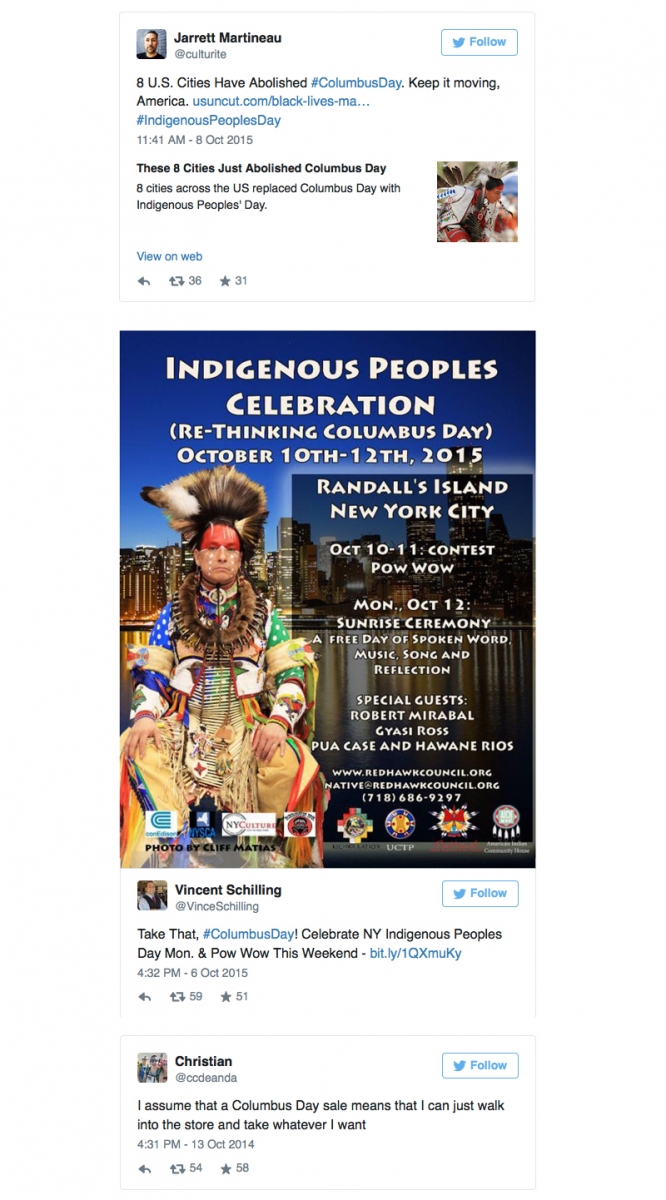 To add insult to injury, the man who "discovered" America never actually landed on American soil. He colonized and explored some of the Caribbean islands and parts of Central and South America, but not what is presently known as the United States.

Bill Bigelow, co-director of Zinn Education Project, which "promotes and supports the teaching of people's history in middle and high school classrooms across the country," explained Columbus' promotion of slavery and savagery in the territories he actually landed on.

"Columbus initiated the trans-Atlantic slave trade, in early February 1494, first sending several dozen enslaved Taínos to Spain," Bigelow wrote in the Huffington Post on Monday. The following year, Columbus ramped up his attempt at making slavery a profitable enterprise, by rounding up 1,600 Taínos, sending the "best" 550 of those to Spain, and telling his fellow colonialists they were free to take whoever remained.

"Let us in the name of the Holy Trinity go on sending all the slaves that can be sold," Columbus wrote.

Proponents of Indigenous Peoples' Day widely regard Columbus Day as the celebration of genocide, rather than discovery. "And Columbus deserves to be remembered as the first terrorist in the Americas," Bigelow said.

See also:
The Indigenous Rituals That Heal Us
They Came For Our Children