An interview with Lama Surya Das by Carol Bedrosian

Affectionately called “The Western Lama” by the Dalai Lama, Lama Surya Das has spent forty-five years studying Zen, vipassana, yoga and Tibetan Buddhism with the great masters of Asia. He is an authorized lama and lineage holder in the Nyingmapa School of Tibetan Buddhism and the founder of the Dzogchen Center in Cambridge, MA. A founder of the Western Buddhist Teachers Network with the Dalai Lama in 1993, he regularly helps organize its international Buddhist Teachers Conferences.

As a Western teacher of an Eastern tradition, Lama Surya has spent half a lifetime melding these deep cultural traditions with the modern demands of American life to create more accessible forms of Buddhist teaching and meditation. He readily acknowledges that many people today have little interest in the “isms” — Buddhism, Hinduism, Taoism — inherent in many spiritual paths and are looking for more practical tools for body/mind/spirit development. These tools are available to Western audiences from beginner to advanced levels in many forms such as yoga, mindfulness meditation and all varieties of martial arts, just to name a few. 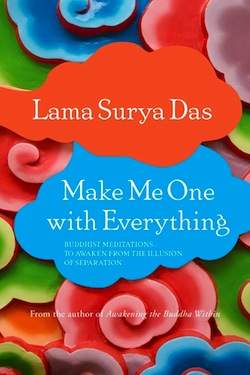 In his latest book, Make Me One With Everything (Sounds True, 2015), Surya Das introduces inter-meditation, the art of experiencing spiritual growth and expansion in everyday life. “If you’ve ever felt ‘at one’ with something — your beloved or your child, a wooded trail, a favorite song — then you’ve experienced inter-meditation,” he says.

Subtitled Buddhist Meditations To Awaken From the Illusion of Separation, the book is full of personal stories and everyday anecdotes that bring these realizations to life.

“I have a friend named Amelia whose favorite inter-meditation practice is on the New York City subway. When she feels anxious, tired or angry, wishing she could be as far from her fellow passengers as possible, Amelia stops, takes a breath, and really looks at one person. She pictures him or her as a baby — pure innocent, nothing other than hope and joy — and she holds that image until she feels truly connected, breathing and inter-meditating with that pure innocent soul. Then Amelia moves onto the next passenger. A commute that could have been just another stressor is elevated to something meaningful, even holy. Who knew that a sacred subway run right beneath the sidewalks?”

Inter-meditation offers both new and experienced meditators a fresh new way to commune with every moment. “Because,” according to Lama Surya, “if we can’t find enlightenment, freedom, autonomy, and bliss amid every nitty-gritty detail of life, then all the rituals, sacraments, prayers, chants, yoga asanas, gurus and pilgrimages in the world are useless.”

CAROL BEDROSIAN: You’re called the American lama or the Western Buddhist by Eastern lamas and spiritual teachers. Does race, nationalism, or prejudice come into play in the global Buddhist tradition?

LAMA SURYA DAS: Of course it does. It’s everywhere. It’s part of human nature to have such different distinctions, but Buddhism has a pretty good record among religions, but I don’t want to be overly idealistic.

In abstract, men and women are equal in Buddhism, but in practice monks are higher than nuns in status and monastic order and so on. But in the Western dharma and American Buddhism, half the teachers are women, and women are much more equal — equally educated and equal in leadership positions, so that’s the good news.

I’m a Lama in the Tibetan Buddhist order so the Dali Lama calls me the Western Lama, or the American Lama, but there are others. We’re in the minority certainly. It’s still an Asian religion and change comes slow in the old world even though Eastern traditions are encountering modernity, change comes slow.

There’s a very vocal and interesting dialogue going on in these decades between preservation, on one hand, and adaptation and innovation on the other hand. We see this similarly with the struggles that Pope Francis and the Catholic Church have, or the Orthodox and Reformed rabbis have in Israel and in other countries, and all the religions, the Protestants, and so on. And certainly in Islam, too, with its religious strife and large groups that are trying to adapt to the modern world and educate women, among other things, there are still some strong local groups that want to go back to ancient Sharia law and things like that.

Buddhism is not without its own internal creative tensions about these issues. I would not say it is racist. Buddha broke the caste system; he was a great social reformer. But that was 2600 years ago. It was a long time ago. These days, we’re still trying to do our best to be egalitarian and color blind, class-free, and also open to diversity such as the LGBQ dialogue and other topics that we have at Buddhist teachers’ conferences and in our communities. So I don’t feel discriminated against, but I am sort of like the white blues man, where everyone expects a blues person to be black from the Mississippi delta. I’m like a white blues man among the Tibetan lamas for sure…me and some of my colleagues. But it’s not a problem.

And time moves forward. Now we are seeing Western dharma, which is less about the “ism” and more about the tools and techniques that can help us. So yoga, and meditation, mindfulness, etc., are happening in the mainstream because there are great benefits and there is scientific research demonstrating and supporting those benefits.

CAROL BEDROSIAN: Are there two branches of Buddhism — the Western dharma and Eastern dharma?

LAMA SURYA DAS: I don’t know about that. There are different branches of Buddhism to begin with, like Christianity.

CAROL BEDROSIAN: But is there a Western branch?

So there’s European and American Buddhism, certainly. I wouldn’t make a hard and fast distinction between Eastern and Western Buddhism, though. I’d say the more interesting distinction would be to recognize that there’s the traditional routes and then there’s the more adaptive and innovative modern forms. Try to preserve the essence, but adapt the forms.

CAROL BEDROSIAN: Are these the ones that would be considered Western Buddhism for Americans? What are the more adaptive forms?

LAMA SURYA DAS: For instance, you don’t have to sit on the floor cross-legged, you can sit in a chair. There’s less influence on monasticism and more on spiritual practices. It’s more psychologically astute, not cosmological or superstitious. It’s more socially active, like the engaged Buddhism movement. Although it exists in the East, it’s more Western democratic and activist influenced. So there are different, more Western-style movements, like the mindfulness movement that’s sweeping North America, and to some extent Europe, but it is not sweeping Asia. It’s extracted from Buddhism so a lot of people are practicing mindfulness at work, in corporate settings.

CAROL BEDROSIAN: More as a tool than a lifestyle or religion.

CAROL BEDROSIAN: Which is perhaps why certain people object to yoga being taught in public schools, because they believe it is a form of religion.

LAMA SURYA DAS: Right. Yoga and meditation are making definite inroads in schools and overcoming those resistances now because they are becoming more secularized and without the ism — without the religious context — and that’s good because they are good tools for a healthy mind, good mental and physical health. But that means it’s losing some of the depth, like the benefits of developing wisdom and enlightenment, in favor of the more temporal benefits like mental health and physical health.

CAROL BEDROSIAN: So mental health versus spiritual health or wisdom.

LAMA SURYA DAS: Yoga for health or good looks or exercise is not the same as the eight-limbed yoga coming from India that brings oneness with God and enlightenment, purity, immortality and so on. So there’s a reductionism, like a diluting. Though mental health, physical health, relaxation, and exercise are all good, they may not be as good ultimately as the ideal of being one with God or being reborn in heaven that the great world religions throughout history have been espousing. Yoga is one of the paths to those things.

CAROL BEDROSIAN: Is the inter-meditation that you discuss in your new book a Western-type tool or does it belong in the other category of the ism? 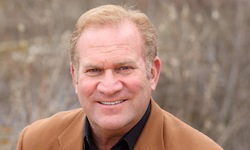 LAMA SURYA DAS: No, it’s definitely a Western-type tool. But it’s not really Western. It’s rooted in both. It’s an enlightenment tool, but it begins with a very secular way of making every part of your life a part of your spiritual path without having to subscribe to any particular religion. So I’d say it’s a wisdom thing rather than a faith thing.

Carol Bedrosian is the publisher of Spirit of Change holistic magazine in New England.