Mother of nine, matriarch Ofelia Esparza learned how to make Día de los Muertos altars from her mother. Now, she’s passing on the craft to a new generation. 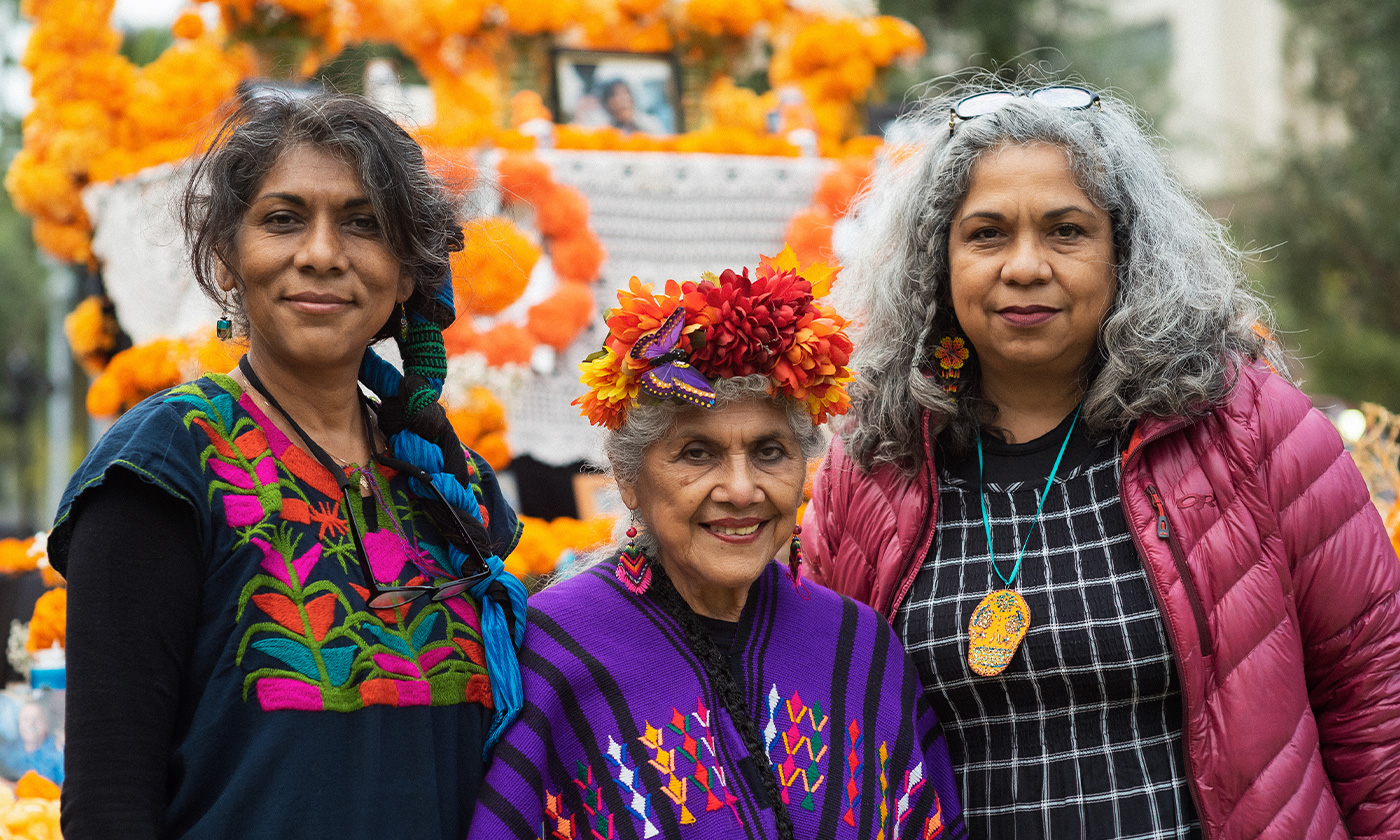 Ofelia Esparza is an artist, an altarista, or altar-maker, and an educator. She was born in East Los Angeles in 1932, not far from where she still lives.

In 2018, her work in creating and promoting Día de los Muertos-themed altars was recognized with the nation’s highest honor for folk and traditional art with a National Heritage Fellowship from the National Endowment for the Arts.

She spoke with YES! about the essential elements of altar-making and how she is passing on the family tradition to her children. Esparza is a mother to nine children. Her fifth child, Rosanna Esparza Ahrens, joined us partway through the conversation. 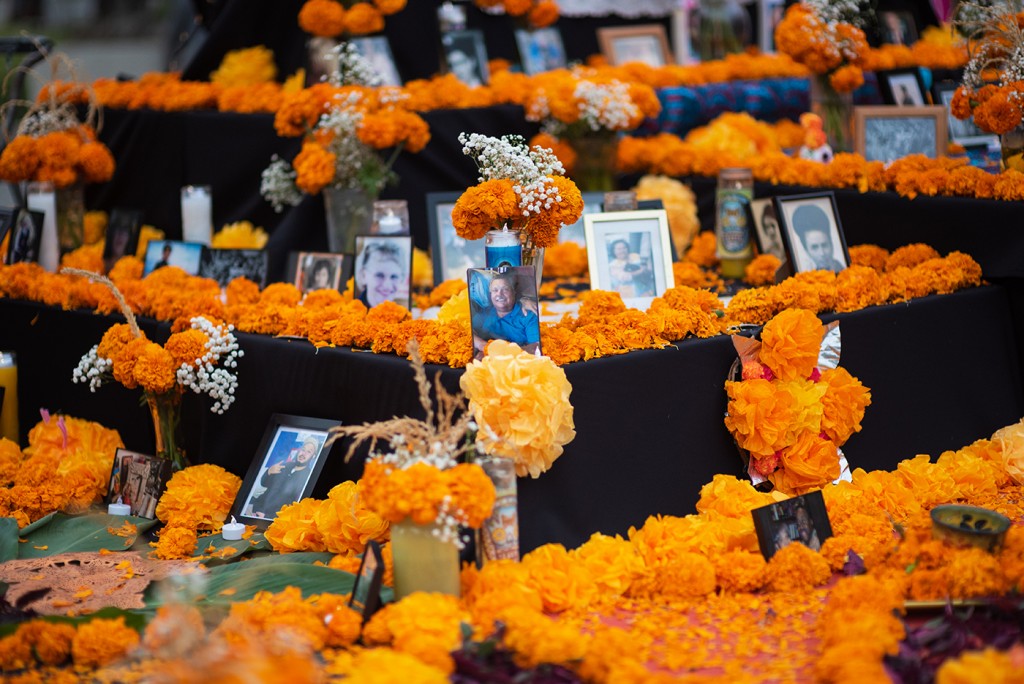 This is the large community altar that Ofelia created for Grand Park. It contains the basics elements of a Día altar: marigolds, tissue flowers (to represent marigolds), candles, and photos of passed loved ones. Photo by Yannick Delva for YES! Media

Sonali Kolhatkar: Is there a standard method of altar-making among Mexican Americans or is it an evolving art?

Ofelia Esparza: Altares or ofrendas are a bridge between life and death, between the living and the dead. When we create an altar, we’re creating sacred space.

Over the years I’ve learned of different traditions, so I can’t really say what is the prototype for an altar, but the elements that I feel are important are the photographs, the candles, the flowers, of course, the food, incense, and papel picado.

It’s become such an art form that many artists do representations of these elements, not necessarily the items themselves.

There are so many ways of celebrating Día de los Muertos in Mexico, which of course has come over with the immigration of people into the United States, that I don’t say, ‘This is the way it has to be.’ The way that I do it is based on my mother’s tradition.

My mother always had an altar with photographs. To me those are the main pieces because the photographs are what generate the stories, and then the actual images of ancestors that you might not have known in person but that you know were part of your background. 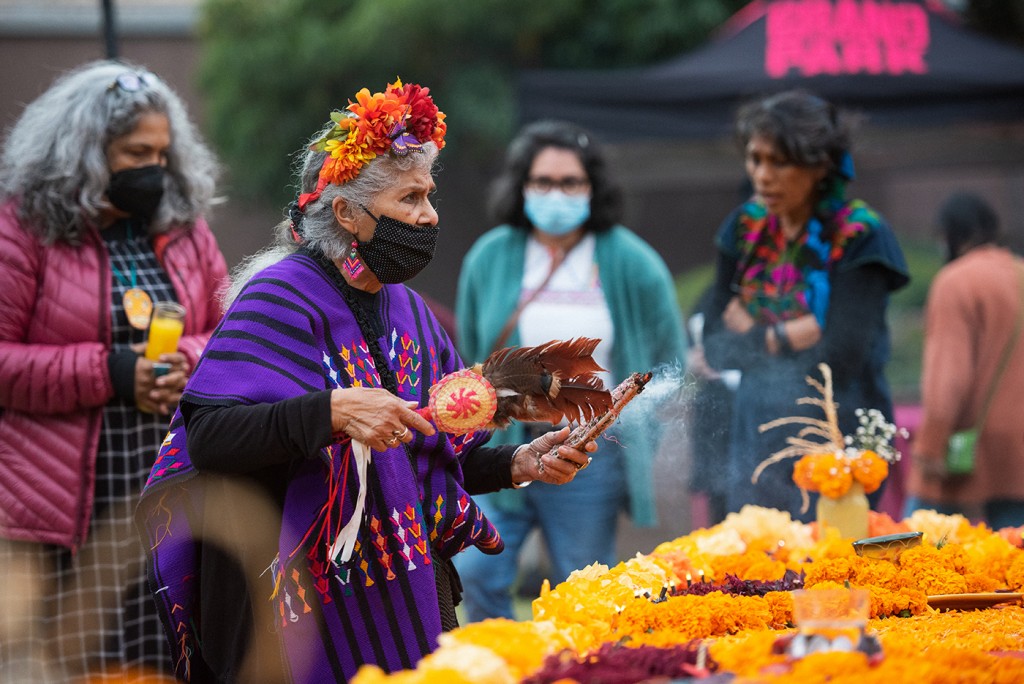 At the community altar, Ofelia Esparza (foreground) is burning copal, which is incense used for special ceremonies. Photo by Yannick Delva for YES! Media

Kolhatkar: Besides photographs of ancestors, are there any other elements to an altar that you feel are essential?

Esparza: I have to represent the four natural elements—that goes back to Indigenous culture—and that’s wind, earth, fire, and water.

In Mexico, and today here in the U.S., people are using papel picado. The papel picado are the cut paper banners that are made out of tissue paper that represent wind. So, with any breeze they move. They create the ambiance for the soul to come and partake of the altar that we have prepared for them.

Also, candles are part of the wind element.

Marigold is essential, I believe. The marigold has a strong aroma, which beckons the soul, [saying], ‘Here is your altar.’ The scent draws them to the altar. Also, in ancient times it represented the sun, which was the major element of the deities.

We also make tissue paper flowers. That tradition came from my mother. Something handmade for the ofrenda is your offering. Ofrenda means offering and sometimes I use the words altar and ofrenda interchangeably. It’s an offering to our loved ones, our ancestors.

The handcrafted or handmade items, including food, are part of your essence that you’re offering to this altar, to your ancestors.

And incense is also a representation of fire. We use copal, which is a natural incense that is traditionally used since ancient times.

You need a glass of water on the altar because the souls came from so far away, they were going to be very thirsty. That’s a tradition that I learned.

Watch a video of Ofelia Esparza explaining the essentials of altar making:

Kolhatkar: Rosanna, what is it like to learn the tradition of altar-making from your mother? Can you share some experiences of making altars?

Rosanna Esparza Ahrens: I remember the flower-making. It’s almost therapeutic, mediative, because you’re cutting paper and manipulating it. It has this familiar sound from moving this tissue paper. There’s a lot of folding and cutting. And meanwhile we’re sharing stories or having coffee and pan dulce, or wine, or tequila depending on who’s present and what stories we’re sharing.

And those flowers are part of the arch that is on the ofrenda. Once that arch is up, it’s like, now we can do everything else because it is the first thing that goes up.

We bring all the items together. We’ve made all the levels with shelves and boxes and covered them with fabric. We usually have three or four levels. Maybe there’s somebody that recently passed that you want to honor this year and so they have the higher position on the altar. And all the other ancestors are there because they’re all together.

Sonali Kolhatkar is currently the racial justice editor at YES! Media and a writing fellow with Independent Media Institute.

View a photo essay from the 2021 Noche de Ofrenda in Grand Park, Los Angeles, where Esparza set up her annual large-scale community altar.