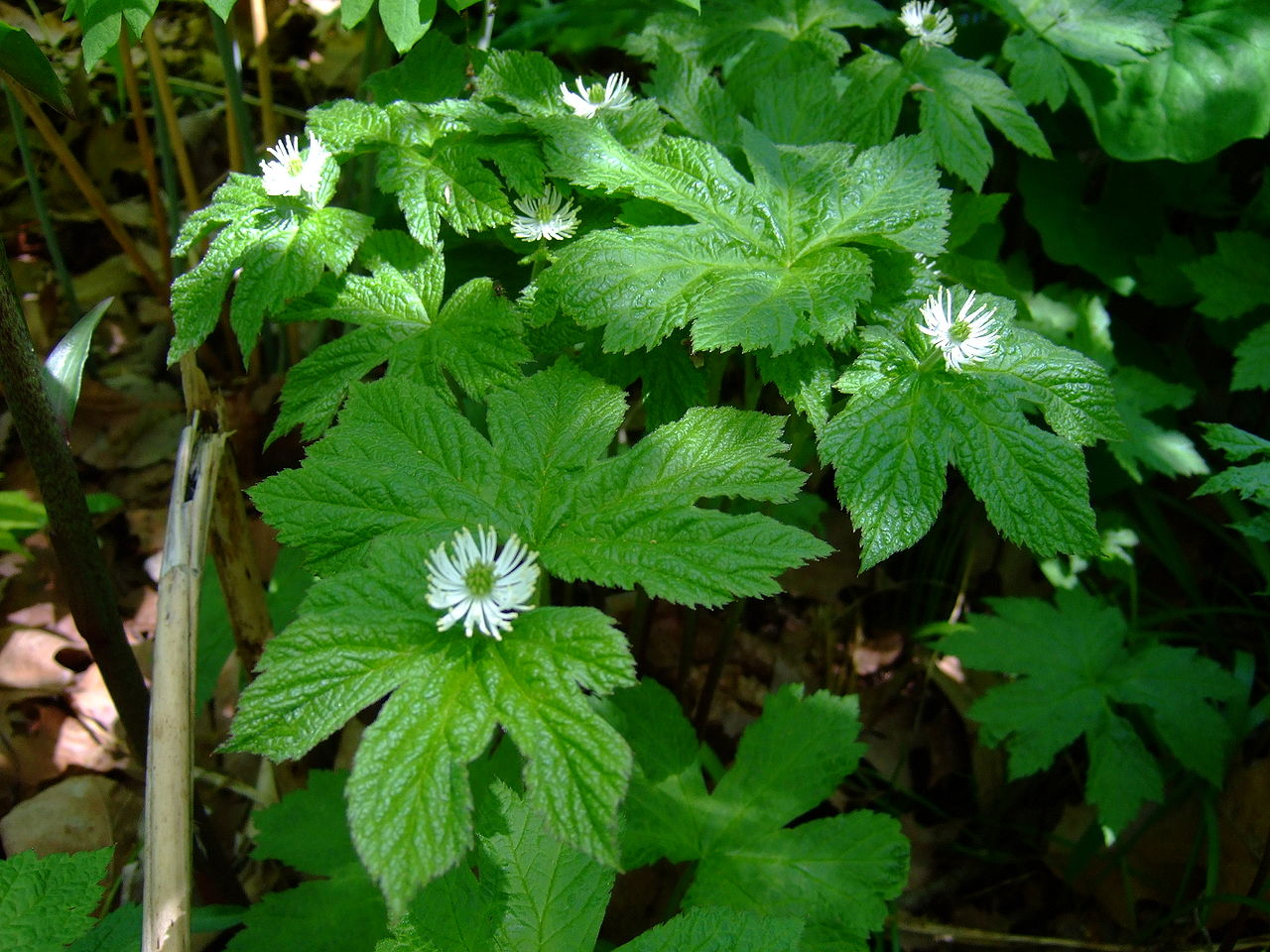 My adventure with goldenseal started with three healthy roots I received from United Plant Savers — part of their fall 2012 “give away” to members. At the time, I was living in Fryeburg, ME (where I lived for 22 years until the fall of 2018 when I moved to NY).

Goldenseal is a deciduous forest understory plant, native to my area but so rare it may not even exist in these parts anymore. While waiting for the roots to arrive, I prepared the bed by removing weeds and roots. I also added compost and some of the previous year’s maple leaves. I tried to envision its ideal home and create it. When the roots arrived, I received them gratefully, and with a bit of ceremony I carefully planted them in their new home, mulching the bed with more leaves to tuck them in for the winter. I wished them the best, and prayed I’d see growth come spring.

My relationship with goldenseal began long before that fall however. As a child, I spent lots of time in the woods in back of my home, and my father took me on hikes often, teaching me about the animals that lived there and the trees and plants. Most of all he taught me to love and respect them through his example. I sought out all the now-rare woodland plants, from yellow, white, and pink lady slipper orchids, jack-in-the-pulpits, red and white flowered trilliums, May flowers… and so many more. I knew what to pick and what to leave and what might be growing in certain types of terrain. Today, all of these beauties are so very rare and I feel their loss deeply.

The medicine of lady slipper intrigued me as I became an adult and then a mother. Lady slippers felt like an ally to me — not to pick and take internally (though I did make some tincture from powdered lady slipper root I purchased in an herb store once, thrilled by its sweet, earthy fragrance and familiarity) — but simply to be around it and to connect with it on a deeper level. It reminded me of my childhood and the woods I loved so much, but it also touched something within me that I couldn’t name. Something wild, something from the depths of mystery, of past lives perhaps. I’m not sure. I still feel it and I’m still trying to put words on it. 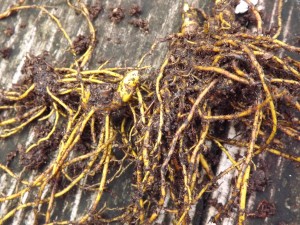 When I first started using herbs for healing about 45 years ago, goldenseal drew my attention. At the time it was often used internally as an herbal antibiotic. Now, of course, we know that isn’t the best use for it, for we also know how endangered it is, how it’s over-harvested in the wild, and to use only cultivated, organically grown roots, and to seek alternatives whenever possible. Indeed, goldenseal is a very powerful healer when used properly. I reserve it for wounds that are or may become infected, either using the powder directly or applying it in tincture form. It’s an ingredient in an herbal throat spray I make, a wound powder, my white pine salve, and an important addition to my medicine cabinet. I’ve used a bit of the tincture on the tip of a Q-tip to nip styes in the bud, and (with the addition of St. John’s wort) to stop a cold sore in its tracks. Goldenseal is a very powerful herb, and you don’t need much.

In addition to goldenseal’s healing ability, there’s something about it that calls to me like the lady slipper orchids. Maybe it’s where they grow — in shady places in the forest — how they each have one flower per plant, how rare and beautiful they are. Or maybe goldenseal is also a memory or remnant of a past life as witch healer, living on the edge of a deep forest?

For many years I resisted trying to grow it. I was afraid I’d kill it, that I didn’t have the right place and I put it off because my vision was to create a nursery for it in the small wooded area behind my house. However, my area was mostly white pines with a few birches, poplar, and choke cherries. Not the best location. Every time I’d go to scout out a location, I was overwhelmed by the work that would need to be done, knowing full-well that it would be a constant effort to maintain a deciduous forest environment in what is essentially a sandy, white pine environment. But when I received the offer for three goldenseal roots, I decided I would give it a shot and see if I could keep it alive in the shady, woodland section of my garden. Whether through accident or design, or maybe my love and careful attention, those three roots thrived, produced flowers and seeds and babies!

The goldenseal seemed to take forever, and for a while I thought the roots had died over the winter. Then, one day — long after even the elecampane had started to push through the ground — there it was! A strong, light green nubbin right where I had planted the biggest root. And then another and another and another! I was so overjoyed I did a little dance right there in the garden. The growth was quick after that, those nubbins growing up and unfurling into beautiful plants. 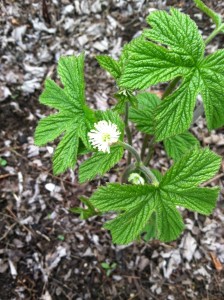 The next spring (2014), a few more plants emerged from the bed, and then — miracle of miracles — flowers! Each plant bore one beautiful white flower that gave way to a green berry that gradually turned bright red, reminding me of a big, juicy raspberry. So now I had berries and therefore seeds! Three berries, each full of shiny, black, round seeds. Small, but still decent sized, a bit bigger than brassica seeds. I didn’t want to blow it, so I searched online to learn the best way of planting them.

Most information on cultivating goldenseal recommends starting with root cuttings, so there wasn’t all that much information on starting from seed. But finally, I found some excellent (as it turned out) information at this link. As the article states, goldenseal seeds cannot be allowed to dry out, unlike most seeds. I followed the directions in that article, processing the seeds carefully, all the while hoping I was doing it right.

Once more it seemed to take forever, but then up they came… also babies! Baby goldenseal plants look very different from their adult counterparts and they generally don’t get their first true leaves until the second year. But from pictures I found, I was able to determine that I had successfully managed about 10 new goldenseal plants. I was thrilled!

People always asked me when I’d harvest some roots. My response was, I have no idea. I wanted to wait to see what happened with the young plants, observe how well they grew, see how crowded the bed got. My main reason for planting the roots was for the experience and to get to know goldenseal up close and personal, to hang out with it, develop a relationship with it, to learn about it as a native plant species rather than as a resource for my use. 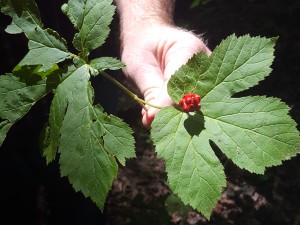 By the time I made the decision to move from Fryeburg, ME to New York the goldenseal bed had numerous plants of all ages and sizes, and if I had stayed I would have needed to expand it. Already a few rogue plants had spread outside the rock borders of the bed. Rather than rely on the new owners being able to care for an endangered plant, I decided to donate the bed to the town. The Conservation Committee agreed to come dig up the bed and move it to the Town Forest.

Before the bed was moved, a couple of friends came and dug up a few plants to start their own beds, and the rest was nestled in its new location. I did visit it in the summer of 2019, and the plants, though not as vigorous as they had been were obviously doing fine. It was hot and dry and, being in the wild now, the goldenseal wasn’t being watered or cared for like it had been. I got an update later in the summer that the plants had produced seeds. These were harvested and processed to start a new bed elsewhere in town. And so those first three roots grew and spread and now there are a few small patches growing in and around Fryeburg.

In my new home in NY state, I’m renting but I’m helping my landlords create a suitable bed for goldenseal, ginseng, and other forest herbs in what should be a perfect location — except the soil needs to be built up considerably first. We’re hoping to plant this fall or next depending on how the soil looks. While planting and propagating endangered woodland plants isn’t quick (you need to take a long-term view), it is so very rewarding, and in the future you or your descendants (not to mention the forest creatures) will be very grateful for the powerful medicine. And you will be playing an important role in preserving these plants for the future.

Susan Meeker-Lowry is a writer, gardener, herb lover, and owner of Gais’s Garden Herbals, a home-based business that sells handcrafted creams, serums, body/massage oils, salves, perfume balms, aromatherapy oil blends, and all natural perfumes. She lives in Delanson, NY and can be contacted at smeekerlowry@gmail.com.

Many souls sleep blissfully under Venus’ early morning trine to Jupiter. Pay attention to your dreams as spiritual messengers are active during the pre-dawn period. A late morning lunar conjunction with Uranus dramatically changes moods...

END_OF_DOCUMENT_TOKEN_TO_BE_REPLACED

Fermentation Magic: A Model for Health and Transformation

How To Navigate Self-Managed Abortion Issues Such As Access, Wait Times And Complications – A Family Physician Explains

16 Ways to Make Your Neighborhood Safer, Greener and Fun