An Ancient Native American Drought Solution For A Parched California

In the Sierra Nevada, above Fresno, North Fork Mono Indians are working to thin the forest. The group's goal is twofold. Save water and prevent large-scale forest fires. North Fork Mono Indians have been using this approach for centuries, but now California's severe drought means these ancient techniques are being looked at as a possible long-term solution.

Ron Goode knows the Sierra Nevada unlike most people. He belongs to the North Fork Mono Indian tribe that calls the Sierras home. He, his crew and I are hiking to a clearing of forest that he calls the unnamed meadow about one hour Southwest of Yosemite.

“As we look around out here even though it’s foggy you can see the thickness of the grass and you can see all kinds of flowers coming up,” says Goode.

When we arrived Goode sang and burned sage in order to ask his ancestors who once lived on the meadow to welcome us.

One year ago the meadow on US Forest Service land was overgrown with trees and crowded with dead and drying plants. Because of his efforts today the meadow is green with tall grass, is surrounded by forest, natural springs are flowing and birds fill the air. 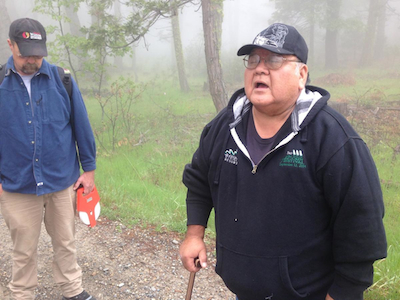 Goode’s worked with volunteers and the Forest Service for the last year to restore this meadow using what he calls his ancestors ancient ways. The restoration was made possible under a grant from the National Fish and Wildlife Foundation, in collaboration with American Rivers.

“We as people have not been taking of the land through all this drought,” says Goode. “What we’re doing is grooming mother earth. She was overloaded with small conifers.”

By removing trees, shrubs and nonnative plants in what was once a meadow, Goode believes the forest won’t consume as much water. It’s a practice passed down generation to generation in his tribe. Thinner forests means snowmelt will pool in mountain meadows and eventually seep into aquifers rather than consumed by the trees. Second, fewer trees and brush means less chance of large wildfires.

“We spent nine days on this meadow opening it up so that the snow that did come, it may have been light but at the same time it was heavy enough to soak in and allow this meadow now to be a sponge like it was,” says Goode.

At the edge of the meadow a trickle of water seeps out into a creek running downhill. Much of the water in California comes from the Sierra Nevada. Snow falls in the mountains, melts in spring and summer, trickles down through forest and meadows and slowly fills streams and rivers. The water is eventually collected in reservoirs before reaching cities and farms.

“We all have something in common it’s called taking care of your land, my land, public land, but it’s also tribal homeland,” says Dirk Charley is a Tribal Relations Specialist with the US Forest Service. 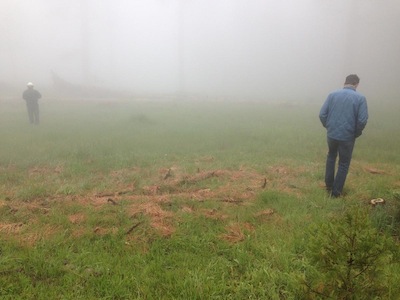 For Charley building a better relationship between the Forest Service and Native Americans is important. Jared Dahl Aldern applauds the relationship. He’s an environmental historian, Professor at Prescott College in Arizona and a researcher with Stanford who is working to strengthen the tribe’s relationship with the public.

“A broader goal is to restore the social ecological system,” Aldern says. “So how do we restore the historic relationships between the forests and the North Fork Mono Tribe.”

The partnership fostered with the North Fork Mono Tribe and the Forest Service decreases the chance of a devastating fire at the meadow site.  Charley with the Forest Service says fire suppression efforts over the last 100 years have created a forest that is full of fuel and could burn on a whim.

“What we’re seeing now is a heck of an improvement,” Charley says. “From a fire management perspective I look at is as this is one of those areas that could be used as a safety zone in case the event of a fire.”

The Tribe is working on two other meadows in the region. Goode says that if he can convince more people to help clear the 6,000 plus meadows in the Sierra Nevada his tribe’s ancient ways just may be solution to California’s worsening drought.

“We’ve got plenty of water if our water system is working,” Goode says. “Our system has been broken. So as we repair it we'll supply our valley with all the water that they need even in a time of drought.”

The amount of water that can be saved by thinning forest and meadows is still unknown, but according to a University of California forest study thinning could yearly add up to 16 percent more water flow out of the Sierra Nevada and into California’s water supply.

See also:
Holy Crop: How Federal Dollars Are Financing The Water Crisis In The West
To Solve California’s Water Crisis, We Must Change the Nation’s Food System