Calming signals can best be described as the way canines communicate through body language. Dogs, being pack animals, communicate through a variety of physical signals using their body, face, ears, tail, movement and expression. We can study the signals dogs use with each other and use them ourselves to increase our ability to communicate with our canine companions.Once you learnhow to physically communicate, you and your dog will live a muchmore meaningful life together!

Looking away is a very appropriate and common example of a calming signal in dogs. In this picture, Dee Dee (on the left) has a yummy treat that I placed between her front paws, while Willy (on the right) has the exact same treat between his paws. My dogs have been trained to “Leave it!” and will not touch their treats until I release them. Notice in this photo, however, that both dogs — knowing they are not allowed to touch their treats — look away from their food (and each other!) in a joint physical display of easing a temporarily stressful situation.

When a dog licks his lips he may not necessarily be hungry. Lip licking can also be a calming signal of stress release.Think of it as the dog dispersing stress through the mouth. He is essentially conveying this message: “I am stressed and am not a threat to you.” The nice thing about this type of calming signal is that you can “reciprocate” by getting your dog’s attention and licking your lips as well. In this manner, you are telling the dog, “I understand that you are stressed. I am licking my lips too in order to help you to calm down.” This is a great behavior to engage in with your canine companion! 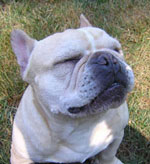 Willy is blinking because he is saying, “I am no threat to you.” Sometimes when a dominant/pushy person or animal gets too close to a dog that tends to be submissive, the more submissive dog will blink his eyes when the pushy animal enters their space. This is another calming signal that many dogs display in an effort to prevent an aggressive confrontation with another canine or person. Many dogs will oftentimes turn their entire head and blink, or, in Willy’s case, turn his head slightly to his left and blink. Blinking is non-threatening and non-confrontational. 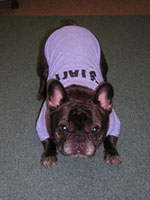 Dee Dee is having a great time! In this picture, she is displaying something called a play bow,which means she is inviting the other dog facing her (in this case, Willy!) to come over and play with her. Sometimes dogs will stretch after sleeping; this, however, is not the same thing as a play bow. The difference is that the play bow always happens in the company of another animal (dog, cat, human, etc.)

The most important thing to remember is to observe clusters of behavior (looking away, lip licking, blinking, and play bow) and to react appropriately based on these physical displays of emotion. Enjoy your dog!

Sally Sizer has been involved with training dogs for30 years. She is a TTouch practitioner for companionanimals, Reiki master teacher and works with manyanimals in both a therapeutic and behavioral capacity. You can contact Sally at Sizer102@yahoo.com.