This June, if you look into the western sky after sunset you'll see Venus, Jupiter and Saturn shining like diamonds. 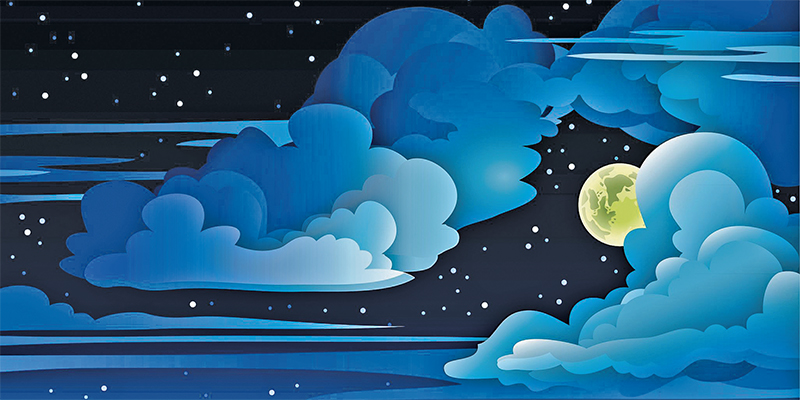 “If the stars would appear but one night every thousand years how man would marvel and stare.” — Ralph Waldo Emerson

Every generation feels blessed with possibilities and beset with challenges unique to their times. No matter what age you live in the motion of the heavenly bodies remains constant. In an era when economic injustice, broken politics, religious fanaticism and endless wars dominate the news, it is easy to lose sight of and forget the simple marvels that grace our world. This June, if you look into the western sky after sunset you’ll see Venus, Jupiter and Saturn shining like diamonds. Each has a message, a message that constantly changes. Look, breathe in and meditate on these omens, and the planets may speak to you.

Keep looking up and later at night, you’ll see a myriad of twinkling stars. Get lucky and you might see one shooting across the sky. If so, make a wish. It is my hope that during the warm summer months you’ll find inspiration in the wonders of the heavens. The vastness of the dazzling Milky Way puts life in perspective.

The Moon is waxing full as the month begins. A lunar conjunction with retrograding Saturn underscores the importance of knowledge and the need to revisit historical facts and rethink opinions from time to time. The full Strawberry Moon is exact at 12:19pm EDT on Tuesday the 2nd. Arbitrary decisions and unfair rules are particularly galling at this time but debates and discussions may give way to more enlightened and progressive thinking in the coming weeks.

Friday the 5th has enormous romantic potential as Venus slips into playful Leo. Long time friendships and lost loves make the weekend of the 6th and 7th memorable. The travel bug is also strong and, with Mercury still retrograde, nostalgia may factor into vacation planning. Uplifting aspects hasten progress in many fields during early June. Numerous scientific and technological advances are likely to be announced. This is a good time to buy a smart phone or new computer. Creative thinking is also encouraged. The pace can be breathtaking. Then a series of energetic shifts occurs.

Mercury turns direct on the very busy 11th. Neptune reverts to retrograde motion on Thursday the 12th. Some confusion and controversies are to be expected. Before things can be entirely sorted out the Sun teams up with impulsive Mars on Sunday the 14th. That same evening Saturn retrogrades back into Scorpio, where he’ll linger until September. The lunar cycle is ebbing, too. These are mixed signals and patience is recommended. Think long and hard before taking a stand or making a move. The Gemini new Moon on Tuesday the 16th is the cosmos’ signal to start afresh.

Summer Solstice, the day the Sun enters Cancer, is on Sunday the 21st. It’s also Father’s Day in the U.S., time to honor dads for the many contributions they make. Gifts of tools and gadgets will most certainly be appreciated because on Monday Jupiter’s brilliant trine to Uranus supports the intelligent use of technology. The trine also favors spontaneity and innate genius. Follow your heart into uncharted territory this week.

Some folks will scratch their heads in wonder when mental Mercury squares Neptune on the 23rd. Keep track of important personal possessions and documents, and pay close attention to schedules and weather reports. Do your best to clarify confusing messages. The possibility of a love at first sight encounter increases as Venus trines Uranus during the early morning hours of the 29th.

On the 1st a full Buck Moon in Capricorn launches the month in dramatic fashion. Venus is also making a fabulous conjunction with Jupiter in Leo. Moods are expansive and generous. The Sun and Moon are both in harmony with Neptune, adding mystery and wonder to the day’s happenings. Be thoughtful about your wishes. Many dreams are on the verge of coming true.

The U.S. national holiday weekend begins with perfect travel indicators. Winged Mercury harmonizes with both Uranus and Jupiter. Independence Day auspices suggest a sharp rise in populist movements during the coming year. A party-like atmosphere dominates much of the weekend.

On Monday the 6th the Sun is at odds with Pluto. Their opposition marks the start of a destabilizing period. Use subtle suggestions rather than issuing ultimatums. Partnerships have much growth potential if responsibilities as well as rewards are equally shared. Be alert to rivalries on the 8th. Tact can help bring a long sought goal closer to fruition. Uncertainties seem to multiply as the weekend of the 11th and 12th approaches. The Sun is at odds with Uranus on Sunday. Personal, political and geological changes continue through the Cancer new Moon day of Wednesday the 15th.

Drive more slowly than usual during this middle of the month period. Guard against impatience and thoughtless actions. Be kind and considerate. Turn the other cheek if you are confronted by someone else’s offensive behavior. Tensions finally ease on Monday the 20th.

The Sun enters Leo on the 22nd and winged Mercury joins the Sun in the regal sign of the lion the next morning. Optimism and peaceful relations brighten the 23rd. Venus has been slowing for the past two weeks and turns retrograde at 0 degrees of Virgo on Saturday the 25th. With Jupiter and Venus in close proximity there’s lots of love to spread around. However, Mars is in an ominous square to Uranus, and Uranus is also poised to turn retrograde. Watch your temper. Use caution around machines and while driving.

Venus will retrograde until September 6th. Uranus retrogrades from July 26th through the end of December. We can expect to do some catching up with family, friends and lovers during these retrogrades.

The month’s second full Moon is during the morning of the 31st. This Blue Moon is in Aquarius, the visionary sign of friendship, community, science and technology. Venus slides back into Leo the same day. A good many reunions are under way, including karmic meetings with soul mates and spiritual teachers.

Saturn, retrograde since mid-March and having backed up from early Sagittarius into Scorpio, resumes forward motion on Sunday the 2nd. This summer is a great time to resolve nagging financial issues, clear up old resentments, forgive hurts, forget and move on. It may prove helpful to give up being right, as Saturn is in a square with Jupiter. In many instances, forgiveness is its own reward during this first week of August.

On the 11th Jupiter moves on into Virgo where the giant planet will spend the next year. The placement bodes well for those born under the harvest sign as well as Capricorns and Taurus natives.

A Leo new Moon initiates a new round of endeavors on Friday the 14th. Teamwork is fostered this weekend as the Sun joins forces with Venus and Mercury aligns with Pluto. Join together with partners and associates and devise winning game plans. Serendipitous meetings and warm relations bring smiles on Wednesday the 19th but the Sun’s sobering square with Saturn on the 21st can test alliances and signal an end for some grand schemes.

The Sun enters Virgo on Sunday the 23rd. The shift is a reminder that summer is drawing to a close. The precious days pass by with increasing speed as the Moon is waxing this week. Life is filled to the brim when the Sun overtakes Jupiter on the 26th. This is an excellent day for business, with its Capricorn Moon and a nice angle between Mercury and pragmatic Saturn.

The Moon is full in Pisces at 2:35PM on Saturday the 29th. The Moon is conjunct Neptune and the Sun is teamed with Jupiter. Magic is afoot and Mother Nature can be a wise teacher at this time but keep an eye on the heavens for hints of a possible weather event. Heed your spiritual promptings and soulful longings during these last days of the month.

Eric Linter offers a complete range of astrological services including readings, classes and his “On Top of the Stars Monthly Guide” for making inspired career and personal decisions. Contact Eric at www.ericlinter.com. Read Eric’s daily forecast on the Spirit of Change homepage at www.spiritofchange.org.