Breathing in SunDo Qi from the Mountains of Korea

Koreans love their mountains. They are the splendor of Korea where about 75% of the peninsula is mountainous. Even with their busy, western-type life styles, many Koreans still find time to go to the mountains. When you climb to the top of a mountain you become closer to heaven and more in touch with the spirit and energy of the cosmos.

There are many mountain ranges in Korea, but one stands out more than the others. This range begins at Mt. Baekdu, or Baekdu San, which is located in the northeastern area of North Korea. It spans almost the entire length of the Korean peninsula and finally ends close to the southern tip of South Korea. The length of the range is estimated to be about 900 miles.

Koreans have long believed that their strength and life force come from this energy channel mountain range. According to David Mason in Spirit of the Mountains: Korea’s SAN-SHIN and Traditions of Mountain-Worship (HollyM, 1999), the Japanese, during their occupation of Korea from 1910-1945, wanted to break this qi (life force) flow and, using 8-foot long iron spikes, “drove them into geomantically strategic mountain peaks and passes throughout Korea in order to geomantically sever the ties between the Korean national spirit and the energy of the land on which they lived.” The strong bond between the Korean people and the qi of their mountains, still evident today, was clearly perceived by the Japanese.

There are several sacred mountains along this range and Taoists, Buddhists and Shamans can be found there today practicing in temples and caves. Taoist practices in the Korean mountains are unique and rich. While there is a tendency to think of Taoist practices as belonging to China, Korea also has a rich history of Taoist culture and practice. Taoism is so deeply ingrained in Korean culture that even the national flag is composed of the tai chi (yin/yang) symbol in the center with the trigrams for heaven, earth, water, and fire at the corners. 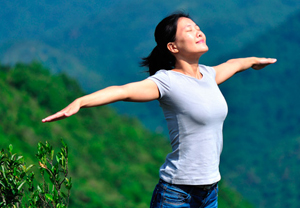 Several thousand years ago, SunDo Taoist masters living high in the Korean mountains developed breathing techniques for the specific purpose of interacting with the qi that is the source of the universe. Pulling in pure life energy with the breath can be a direct conduit to the Tao. When qi is refined within the tancheons (Korean word for chakras), one becomes aligned with the root qi energy of the cosmos. This is the path toward oneness that all Taoist practices aim toward.

At the core of SunDo teaching is the practice of tancheon cultivation. Tancheon(s) refers to three primary energy centers — lower, middle and upper — in the human body. The first tancheon is located in the lower abdomen, the second on the center line of the body level with the heart, and the third in the head behind the space between the eyebrows. When qi is correctly pulled into the body, it is stored and refined in the tancheons. To store and refine qi efficiently, SunDo practitioners use breathing techniques, body postures, visualizations, and meditations. Of these, the breath is most important.

The primary SunDo breathing technique is to breathe into the lower abdomen with a slow, even rhythm, using only the nose. The beginning rhythm is a 5-second inhale and 5-second exhale, maintaining a smooth transition between in-breath and out as the area below the navel expands on inhalation and contracts on exhalation. The most significant factor for refining the breath is that the mind and breath are not separated while breathing. This is difficult to describe with words, but one way to say it is, “the mind becomes the breath and the breath becomes the mind.” Uniting the mind and breath requires absorbing the mind into the lower tancheon where it can pull in and prime the body to utilize purer forms of energy.

The SunDo breath rhythm begins the process of connecting to the essence of our inner and outer worlds. The inhale and exhale get longer as one progresses, leading to further tancheon cultivation that reaches deep inside us to effect our body, mind, and spirit. The longer the breath, the more qi becomes refined.

The overall process of using breath to cultivate qi strongly impacts our health. All illnesses, whether physical, mental, emotional or spiritual, have a qi configuration at their base. When we practice SunDo breathing for tancheon cultivation, we change the qi patterns inside us. As qi accumulates in the lower tancheon, it naturally sends qi out to any areas of the body where it is needed and strengthens areas of weakness. This also extends to mental and emotional levels. Qi flows smoothly through our body/mind/spirit without excess or deficiency.

If we continue SunDo breathing we eventually awaken to the relationship that exists between humans and the universe. We come to realize that the energetic foundation of the universe is the same qi that gives us life. The universe is alive and we come from it. Qi is the primary ingredient in human beings. SunDo breathing is the catalyst that expands our body, mind, and spirit to energetically connect with the world. This expanded awareness heals us at all levels.

Ron Catabia, MS, currently teaches SunDo in Swansea, MA. He has been practicing and studying SunDo for 24 years and recently returned from a 4-year sojourn in South Korea. He is certified as a master teacher by the Kuksundo Federation in Seoul. For more information about SunDo go to www.sundo.org. Learn about the February 2013 Instructor Training Program with SunDo Taoist Healing Arts here.