A building’s primary purpose may be to keep the weather out, but most do such an effective job of this that they also inadvertently deprive us of contact with two key requirements for our well-being and effectiveness: nature and change.

In the 1950s Donald Hebb’s Arousal Theory established that people need a degree of changing sensory stimulation in order to remain fully attentive. And 30 years later, landmark research by health care designer Roger Ulrich showed that hospital patients in rooms with views of nature had lower stress levels and recovered more quickly than patients whose rooms looked out at a brick wall.

Unfortunately, many buildings – especially in cities – are not blessed with green surroundings. I am part of a group of architects and psychologists at the University of Oregon that has been examining ways to overcome this problem using an aspect of nature available anywhere: the weather. Think of rippling sunlight reflecting from water onto the underside of a boat, or the dappled shadows from foliage swaying in a breeze. Other examples can be seen at vitalarchitecture.org.

When we brought these kinds of natural movements indoors, we found that they reduced heart rates and were less distracting than similar, artificially generated movement. Early results suggest that seeing live natural movement of this kind in an indoor space may be more beneficial than viewing outdoor nature through a window, and could not only help to keep us calm but also improve our attention.

These findings are consistent with the Attention Restoration Theory proposed by University of Michigan psychologists Rachel and Stephen Kaplan. Among other things, their work suggests that familiar natural movement patterns of this kind have the capacity to keep us alert without being distracting. 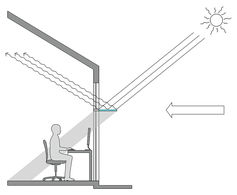 Over the last two decades architects and engineers have developed approaches to building design that greatly reduce the impact of buildings on the natural environment (“green” buildings) and their human occupants (“healthy” buildings). But these movements focus primarily on new buildings, which benefit only a relatively small number of people compared to the many who could be helped by making existing structures more habitable.

Moreover, most people – including many of those responsible for ordering the construction and remodeling of buildings – are not aware of these advances. Many key features of green buildings, such as energy and water conservation, for example, are not immediately noticeable, and as a result, these simple but important practices are significantly underused.

Several leading commentators on sustainable design, including Judith Heerwegan and the late Stephen Kellert, have suggested that in order to have any meaningful impact on the daunting environmental problems we now face, green buildings can no longer simply “do no harm.” Rather, they argue that buildings need to actively demonstrate ways of living in harmony with nature. Our work suggests that bringing the movements of sunlight, wind and rain indoors could make passive energy-saving features in buildings more obvious to the people who order and occupy them, and so greatly increase their usage. 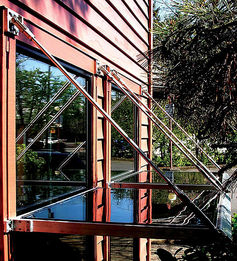 Light shelves, for example, are devices that are commonly retrofitted to the windows of existing buildings to reflect daylight deeper into an interior. Former University of Oregon master’s degree student Aaron Weiss and I have shown that when a shallow layer of water is added to the top of a light shelf and is disturbed by the wind, the shelf reflects moving sunlight patterns onto the ceiling inside.

In controlled experiments using a windowless room, with a fan and powerful light to represent the wind and sun, we found that this kind of wind-animated light not only lowered occupants’ heart rates but was also less distracting than similar, artificially generated moving patterns. Importantly, adding wind movement did not reduce the amount of light the shelves transmitted. However, it did make the shelves much more visible to people using the space.

We found the same was true of a range of other key passive energy-saving techniques, including solar heating, shading and natural ventilation. Adding sun, wind or rain-generated movement did not reduce their environmental performance, and in many cases it revealed their operation to those using the building.

The calming effects of natural indoor animation could be particularly helpful in stressful locations, such as hospitals and doctors’ offices – especially in places where people experience the additional stress of waiting. Aquariums are often used in medical waiting rooms, for example, because they have been found to have a calming effect on patients. The stress reduction can be even greater, however, when indoor movement comes from uncontrolled nature such as the weather.

This field test in a medical waiting room confirmed that most people seem to find the naturally moving indoor light patterns calming and fascinating in a nondistracting way.

But how can we invite the movements of the elements indoors without undermining a building’s first task – sheltering us from the weather? There are three simple ways. We can enclose weather-generated movement in glass courtyards; use sunlight to project movement from outdoors onto interior surfaces; or project it onto the outside of translucent materials, such as obscured glass.

Left: A glazed internal courtyard can bring weather-generated movement into its surrounding indoor spaces. Center: Wind-animated foliage shadows projected by the sun onto an interior surface. Right: Allowing the sun to project wind-animated shadows onto the exterior of translucent materials, such as obscured glass, can also effectively bring that movement indoors. All photos by Kevin Nute, CC BY-NC-ND

No Real Substitute For Live Nature

There are many kinds of recorded natural phenomena available today. We can watch videos of gently rolling ocean waves, or fall asleep to the recorded sounds of falling rain. There are even sophisticated software programs that can generate these effects digitally. So why go to the trouble of redesigning buildings to bring these effects indoors?

To answer this question, former University of Oregon graduate student Jeffrey Stattler and I projected a digital tree shadow onto the wall of a windowless room and tested whether there was any difference in people’s responses depending on whether the electronic tree moved with live changes in the wind outside, or according to a computer program. 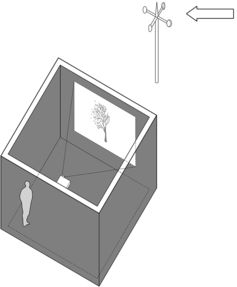 Most people could not tell whether the tree movements were generated by the wind or by computer. But when they believed the movement was wind-generated, their assessments of its beneficial effects were significantly higher in all categories.

In other words, indoor sensory change is likely to have a much greater beneficial effect on us when we think it is natural and live. So unless we are prepared to mislead people, there is no real substitute for using the real thing.

According to the Environmental Protection Agency, most people in the United States now spend more than 90 percent of their lives inside buildings. Features that make us more relaxed and productive in those indoor environments, then, could have significant positive effects on a great many lives.

Lighting, heating and cooling those buildings accounts for almost 40 percent of U.S. energy consumption. The same natural indoor animation effects could also help to reduce that figure by increasing public awareness of passive energy-saving in buildings.

In addition to its practical benefits for people and the environment, weather-generated indoor animation also shows us that, while separating us from its extremes, buildings can also reconnect us with nature.

Kevin Nute teaches architectural design and courses on spatial ordering, building types, and time in built space. Professor Nute’s research focuses on qualities of built environments that resonate directly with building users. His most recent work, Vital: Using the Weather to Bring Buildings and Sustainability to Life (2014), a video animated ebook, explains how the natural movements of the sun, wind and rain can be used to improve the well-being of building occupants and raise awareness of sustainable living practices. Vital is available from the iBookstore and via the website vitalarchitecture.org.