Clean Energy Justice: Stories from the Front Lines of Defense 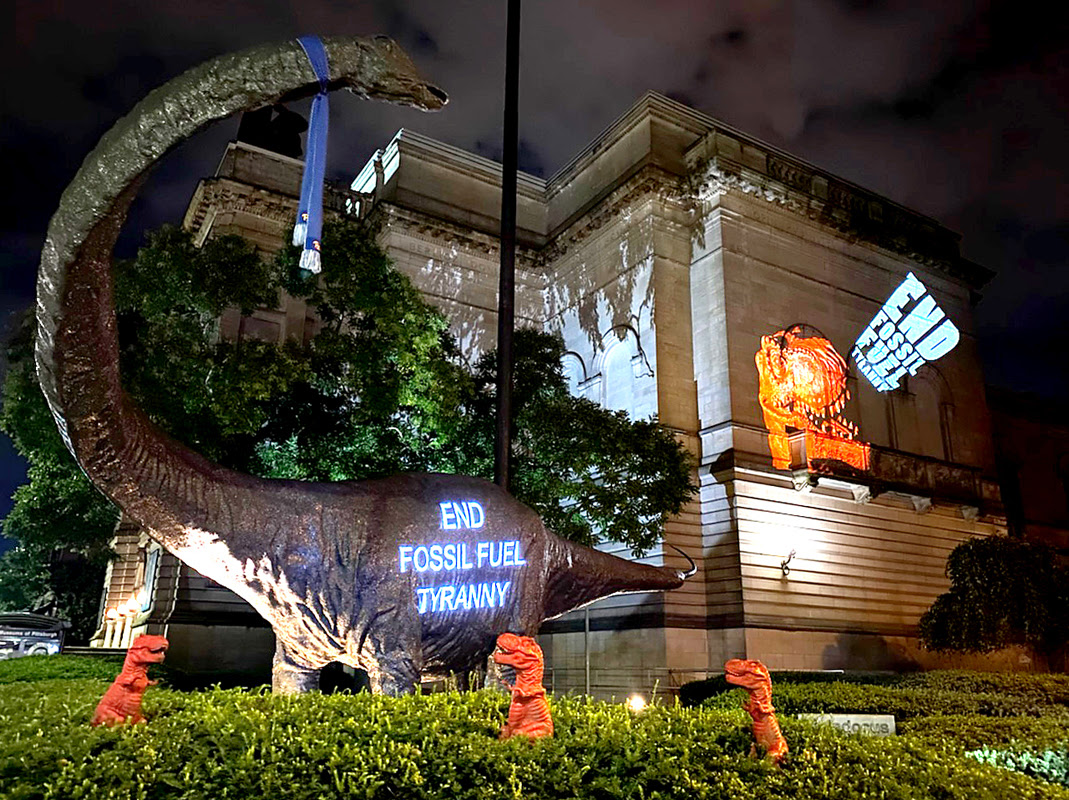 The Natural History Museum recently joined with Indigenous, Gulf South, and Appalachian communities on the frontlines of fossil fuel development to produce the Clean Energy Justice Convergence: a series of expeditions and events that coincided with the 13th Clean Energy Ministerial, a convening of world energy ministers and industry leaders in Pittsburgh, PA, September 21-23, 2022.

As world leaders discussed investments in technological solutions to the climate crisis, the week-long convergence was dedicated to the growing movement of earth, sky, and water protectors working to advance clean energy justice and put an end to false solutions and fossil fuels.

From a cross-country totem pole journey grounded in ceremony and prayer, to “toxic tours” of gas, steel, and petrochemical infrastructure led by impacted communities, to roving art projections and roundtable discussions, the events shone a spotlight on the costs, public health impacts, and environmental devastation associated with extractive and fossil fuel-based energy systems. 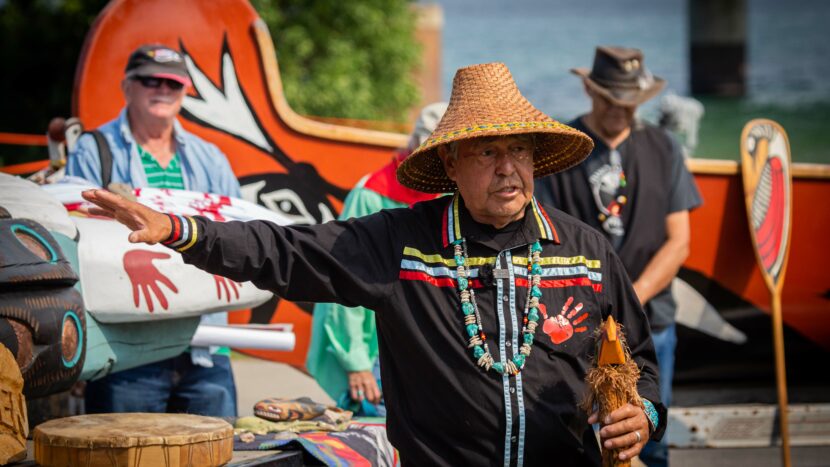 As floods ravaged Puerto Rico and Alaska, and wildfire smoke smothered the western US, the House of Tears Carvers traveled from the Pacific Northwest to the Clean Energy Justice Convergence in Pittsburgh, PA with a newly carved totem pole and a delegation of youth and elders from the Lummi, Tsleil-Waututh, and Navajo Nations.

During the 15-day journey, they paused in communities across the country to offer blessings and prayers, including a visit to the White Earth Reservation where a proposed tar sands oil pipeline threatens sacred waters, and a visit with the family of George Floyd in Minnesota.

Last week they arrived in Southwest Pennsylvania where they drove the totem pole, a sacred entity of healing and protection, through environmental justice communities and fracked gas lands. 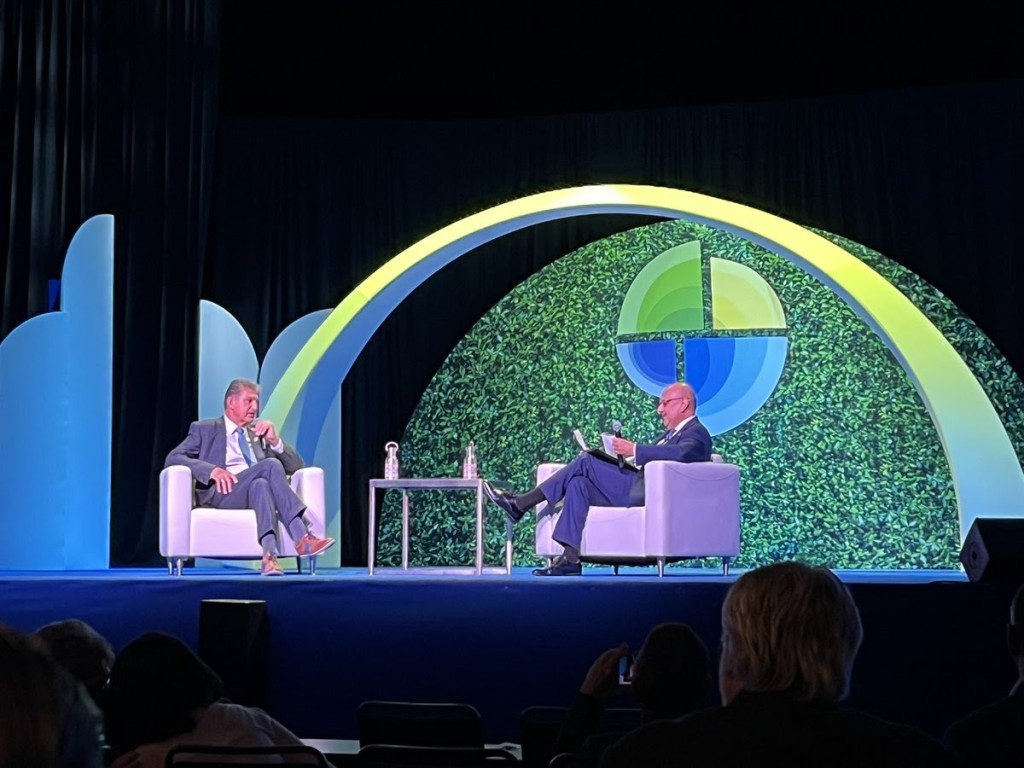 U.S. Senator Joe Manchin speaks at the clean energy ministerial. The Senator has come under fire from climate activists and EJ communities for proposing a deal that would fast-track the fossil fuel permitting process and green light gas export facilities and the Mountain Valley Pipeline in Appalachia.

The delegation parked the pole outside the VIP opening of the 13th Clean Energy Ministerial, where they prayed for leaders to reject false solutions to the climate crisis and account for the next seven generations in their decision-making.

The week culminated in a public program of speakers, song, and ceremony around the totem pole.

As part of the convergence, public health advocates and local residents led members of the public and attendees of the ministerial on a series of Toxic Tours—expeditions to environmental justice communities living on the fenceline of toxic industry. Sites included the Shell petrochemical complex in Beaver County, gas wells in Washington County—the most fracked place in the country—and U.S. Steel’s Clairton Coke Works plant in the Mon Valley—the largest coal processing plant in the country.

These expeditions brought together voices from the so-called sacrifice zones of the extraction economy, testifying to the high rates of asthma, chronic illnesses, and clusters of rare cancers caused by oil and gas. The harm caused by the energy industry is perpetuated by some of the technologies billed as “solutions” at the Clean Energy Ministerial, where carbon capture, hydrogen power derived from fracked gas, and other fossil-fuel perpetuating technologies only expand our reliance on fossil fuels.

Reuben George of Tsleil-Waututh Nation speaks at Phipps Conservatory and Botanical Garden during a roundtable discussion organized by the Breathe Project and The Natural History Museum.

Moderated by The Natural History Museum’s director, Beka Economopoulos, this round-table discussion brought Indigenous speakers together with grassroots leaders from Appalachia and the Gulf South who testified to the health impacts and environmental devastation associated with extractive and fossil fuel-based energy initiatives billed as clean energy, including carbon capture and hydrogen power.

Beyond wrenching stories of corruption, harassment, and poisoning from petrochemical industries, the speakers made it clear that the front lines of devastation are also the front lines of defense for the future generations around the world. The event ended with a standing ovation for those heroes and sheroes who refuse to let their worlds–all our worlds–to be sacrificed.